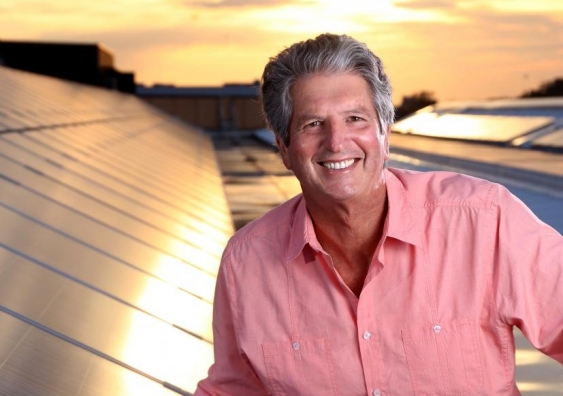 Martin Green, a pioneer of solar cells who has led the field for much of his 40 years at UNSW.

When Professor Martin Green’s Solar Photovoltaic (PV) Group fabricated its first solar cell in 1975 within UNSW’s School of Electrical Engineering, little did they know their research would change the world. “Our first experiments were rather rudimentary,” Green recalls. “We had a simple solar simulator made of a scrounged microscope lamp, and a series of light filtering wheels through which we could test the cell.”

They were initially interested in looking at the voltage output from a silicon solar cell as a first step in deriving maximum power. It wasn’t long before they achieved 618 millivolts (mV), one of the highest voltages for silicon cells that had ever been measured. “That really set the tone for our early research activity,” Green continues.

Green and his team presented their results in the US in 1976 visiting almost every research group and many young start-up companies that were becoming active in the field. “We got to meet the vast majority of people involved in PV in the US at that time,” Green says. “I call it our “On the Road” trip, a bit like Jack Kerouac but not quite as much sex, drugs and rock and roll!”

They returned to Australia ready to establish their own lab in 1977 and focused their research on the MIS (metal insulator semiconductor) structure. Although this wasn’t terribly efficient, in terms of the ratio of electrical output to the incident energy from sunlight, this structure allowed them to start getting in the record books in terms of the open-circuit voltage of the devices they were making.

UNSW versus the world

It wasn’t long before they were part of an international race to improve the open-circuit voltage of a cell. “It was like UNSW versus the rest of the world,” Green says. “We quickly shot ahead of NASA, Comsat and everyone else and kept increasing our lead.” They were the first to exceed 650mV and were close to 700mV after their first year or two of activity in this area.

With such a large lead over the other groups working on this, they decided to switch their focus and convert this lead to an efficiency advantage.

Almost as soon as they set their sights on improving solar cell efficiency they began dominating the field. “We hit the jackpot in 1983 and set our first world record by achieving 18% solar cell efficiency by capitalising on oxide passivation,” Green explains. Not long after, they reached 19% by reducing the contact between the metal and the silicon material to very small areas.

Then, in 1985 they achieved their next big result: the first 20% efficient cell. “This was the equivalent of the four-minute mile of photovoltaics,” Martin says. “The only extra thing we did was to add texture to the top surface of the cell to reduce reflection. That was what pushed us over the 20% mark.”

Throughout most of its history, the team relied on Green winning research grants for its survival - an unnerving position to be in - but Green’s approach has been to treat them as an exercise in thinking creatively about the challenges facing his team. Perhaps this accounts for his staggering 100% success rate in the early stages.

“When you write a grant application it’s not enough just to say, ‘We’re going to incrementally improve the device structure,’ you’ve got to come up with a few way-out ideas,” Green explains. “It forces you to come up with a some ideas that bring a bit of excitement into the proposal.”

One of the ‘way out’ ideas Green and his team developed in the mid-80s is one that looks very familiar to people working on solar cells today: the PERC or Passivated Emitter Rear Cell structure. PERC technology has led ultimately to 25% efficiency and is starting to transform the whole manufacturing industry. About 10% of the total manufacturing capacity was PERC in 2014, and forecasts suggest that by 2020 the majority of production will be the PERC cell.

The buried contact cell is one of the most famous and most profitable patented ideas developed at UNSW. It is the joint brainchild of Green and his longtime colleague Stuart Wenham. “Stuart and I were chatting in my office one afternoon and we came up with the idea of the buried contact solar cell. We saw it as a way of transferring our 20% cell technology into low-cost production,” Green recalls.

The first big installation of the buried contact cell was undertaken by BP in Spain in 1994: a one megawatt PV system. “This was one of the proudest days of my life,” Green continues. “Standing in a massive field, solar panels in every direction all equipped with technology that originated in our lab.” By the time the patents ran out in 2005 there had been over a billion dollars’ worth of sales of products under license to the University.

UNSW Professor Stuart Wenham reflects on Green's work with high regard. “When I started my PhD in the early 1980s, I looked around the world to see who I thought was the best researcher in photovoltaics, and in my view it was very clear that Martin was that person. I felt honoured and very privileged to have Martin as my supervisor, and since that time my opinion that Martin is the world’s best photovoltaic researcher has simply gone from strength to strength. I would challenge anyone to try and disagree with me.”

The impact of graduates

By the year 2000 the PV industry had really started taking off and this coincided with UNSW launching the world’s first undergraduate PV degree program. “We picked our timing pretty well,” Green says, “the market suddenly grew exponentially and we were able to field graduates at the time that the industry needed them.

“We’ve had a big impact in the technical sense,” he continues, “but our biggest impact must be in terms of the graduates that we’ve produced.” Graduates from Green’s group have been instrumental in transferring the PV manufacturing industry from high-cost regions of the world into Asia which has led to the dramatic reduction in solar cell prices.

Green’s most famous graduate is his twelfth PhD student. Zhengrong Shi graduated in 1992 and became the world’s first solar billionaire. By 2010 he was the head of the world’s largest manufacturing company. Green calls Zhengrong’s rise to riches: “Zhengrong’s Billion Dollar Recipe” (see breakout box), which has since been followed by several other companies that are now the leaders of the industry.

Green believes there have been four major players who have made PV a realistic alternative energy source.

Germany established the political framework that created the market for PV; China provided the capacity and low cost labour needed to expand production quickly; the US provided the investment dollars that allowed these companies to grow; and Australia provided the expertise that allowed all of this to happen.

“Photovoltaics is becoming a sizable contributor to the new electricity generation mix and we can be proud of the role that we played in making it a reality,” Green says. “The role I see for our Centre in the future,” he continues, “is the technology hub for the Asia-Pacific region. There are exciting times ahead.”

The proof is in the heating