He shared in a Nobel prize for physics and pioneered construction of the world’s largest radio telescope. Now Brian Boyle is blazing a trail for UNSW research. 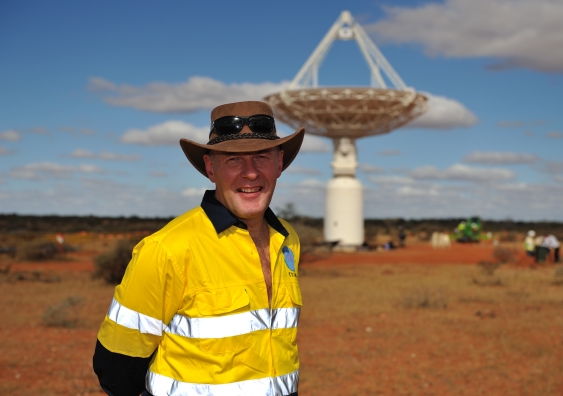 A love affair with the Cosmos … Brian Boyle. Photo: CSIRO

When he was eight years old, Brian Boyle’s mother took him to see 2001: A Space Odyssey.

It was the moonshot era, when every little boy dreamed of being an astronaut, but Boyle’s was to be a different path to the stars.

Walking out of the cinema, the young Scotsman was transformed.

“If there was a pivotal moment it was Odyssey. It gave me this sense of awe and wonder about the universe, and that has never left me,” he says.

“I was too uncoordinated to ever have delusions of being an astronaut, but I wanted to understand space better. I wanted a career that filled me with awe and wonder and sheer bafflement, and astronomy did that in spades.”

Boyle’s love affair with the cosmos – and Australia – began in earnest in 1983 when his PhD study of quasars brought him to the then Anglo-Australian Observatory (now the Australian Astronomical Observatory, AAO) at the foot of the Warrumbungle Ranges in central NSW.

Though thousands of kilometres and a long flight from Europe, Boyle says he was drawn to Australia, which was considered an intellectual powerhouse in astronomy and renowned for innovative researchers
who took risks with technology.

If there was a pivotal moment it was Odyssey. It gave me this sense of awe and wonder about the universe, and that has never left me.

It was a decision that would make his career.

During his time at the AAO, Boyle linked up with a University of California, Berkeley, team that was hunting for exploding stars, and took the project back with him to Cambridge.

Eleven years later, the Supernova Cosmology Project group would be among three teams to publish a landmark paper in 1998 showing the universe was expanding at an accelerating rate. The discovery won the 2011 Nobel Prize for Physics.

“We all got to go to Stockholm for a fantastic bash,” says Boyle, who claims his was only a “homeopathic” role many times diluted.

After his groundbreaking work at the AAO, Boyle was invited to run the telescope, a prestigious appointment. A few years later, he was appointed director of CSIRO’s Australia Telescope National Facility, which oversees the country’s radio astronomy observatories.

Although world leading, by the time of his arrival in the top job it was clear the increasing clamour of terrestrial technology meant Australia’s radio telescopes were straining to hear the near-silent whispers of the distant universe.

With others, Boyle hatched an ambitious plan to amplify those whispers by building a telescope more powerful and more advanced than anything seen anywhere else in the world.

Such was the scale of the challenge, he convinced John O’Sullivan, the father of wi-fi, to come back to CSIRO and join his team.

Boyle’s vision was that the telescope form part of Australia’s bid to host the Square Kilometre Array (SKA), a multi-billion-dollar radioastronomy project involving 20 countries and wielding 10,000 times the discovery potential of current equipment.

His tireless advocacy was integral to Australia joining South Africa as joint hosts for the SKA.

After seeing the project through, Boyle – who jokes he has a two-Pi attention span, or 6.28 years – needed a challenge to rival the unique diplomatic and technological demands of the ASKAP and the SKA.

Helping to spearhead the UNSW research agenda seemed like a natural fit.

In his role as Pro-Vice-Chancellor (Research), Boyle is responsible for the University’s research strategy, partnerships, grants management and the new Michael Crouch Innovation Centre. “I’d like to think I’m helping to clear away barriers for people,” he says.

“The thing that actually inspires me most is going into an environment where you’ve got brilliantly creative people, fantastic leadership, and a culture of being unafraid to take risks.

“For me, UNSW captured that.”