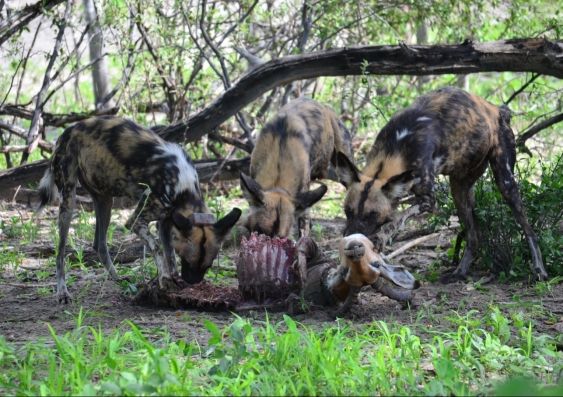 A radio-collared pack of African wild dogs from the study in Botswana shares an impala. Credit: Megan Claase

A unique study of African wild dogs in which high-tech collars were attached to all members of a pack to simultaneously track their movements has overturned conventional wisdom about how the endangered species hunts prey.

The multi-coloured African predators are a key focus for conservation by zoos including the Taronga Conservation Society Australia (Taronga), which houses two packs of African wild dogs at Taronga Western Plains Zoo in Dubbo, west of Sydney.

“For the first time, we have shown that wild dogs achieve hunting success through short high-speed runs, rather than long-distance pack hunts that are portrayed in wildlife documentaries about the animals,” says study co-author and research fellow at UNSW Australia and Taronga Dr Neil Jordan.

“This means their hunting strategies in the wild are far more adaptable than previously thought, and this is good news for their conservation.”

The research is published in two papers here and here in the prestigious journal Nature Communications. 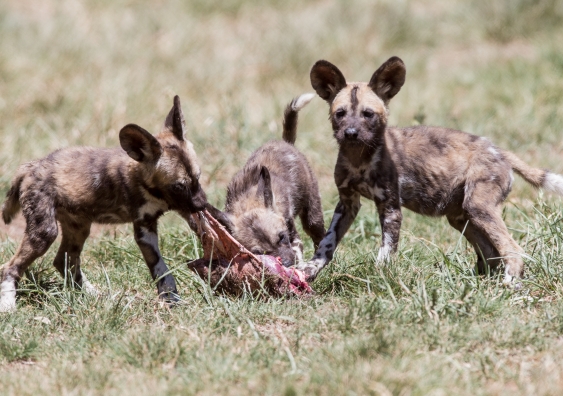 The RVC-built collars provided the first simultaneous recordings from all individuals in a pack in their natural environment. The collars have a unique, dynamic sampling system that responds to how much the animal is moving – increasing from one GPS position every hour to five GPS positions every second when the animals are most active.

The collars also record data from an on-board gyroscope and accelerometer during chases, providing round-the-clock information on activity and the range they cover, as well as detailed insight into entire chases.

In the woodland savannah which is typical of the species’ remaining range, the team collected data from 1119 individual chases over six months in the Okavango Delta. Most prey were impala.

“We were amazed that there was no evidence of high-level cooperative hunting at all,” says Dr Jordan, of the UNSW Centre for Ecosystem Science.

“Instead, individual dogs ran independently of other pack members, did not assume particular roles, and never ran ‘relays’ (taking over the chase from a tiring pack-mate).”

Head of Conservation and Science at Taronga Dr Rebecca Spindler says: “This sort of detailed information is critical to understanding the role and impact of species within ecosystems and ultimately for conservation planning of the species.

“Taronga is proud to play a role in generating conservation outcomes in the wild, as well as increasing awareness of conservation issues through our zoos,” she says.

The distance and speed at which the hunts took place also surprised the researchers.

“The wild dogs typically employed short bursts of speed over distances averaging only about 200 metres, and they ran at high speed for a mere kilometre each day,” says Dr Jordan.

“This was quite different to on-screen portrayals of their behaviour, where they are considered the epitome of endurance hunters, chasing down their prey over many kilometres.

“But African wild dogs were also no slouches, hitting a top speed of 68.4km/hr, which is not much slower than the speedster of the carnivore world, the cheetah, which we clocked at 93km/hr,” he says.

Marathon chases were thought to make African wild dogs vulnerable to the energetic impacts of losing their hard-earned spoils to competitors like spotted hyaenas.

“Our new understanding is that African wild dogs use a series of shorter chases, with considerably lower hunting costs than previously thought,” says Dr Jordan.

“Combined with sharing their spoils with their pack mates, this makes them much more energetically robust – welcome news for this endangered species.

“But the species is not out of the woods yet. Wide-ranging packs are often exposed to human threats outside protected areas, which are generally too small and filled with competitors to maintain viable populations of these iconic hunters,” he says.

Something to sneeze about: democratic voting in African wild dog packs