Opinion Squeezed by gravity: how tides affect the groundwater under our feet

We know the tides affect the oceans, but they also affect groundwater. If we can understand how, then we can better protect this precious resource. 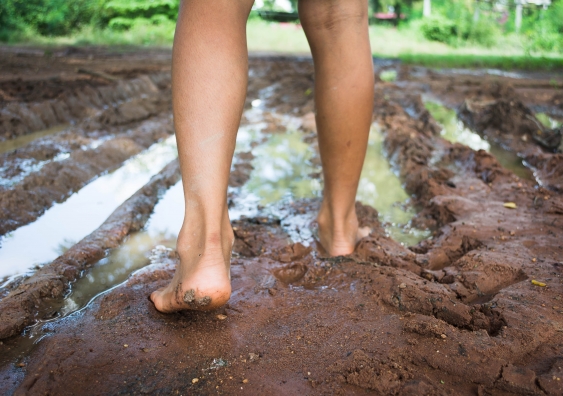 OPINION: When returning from a swim in the ocean, sometimes it seems as though your towel has moved. Of course, it’s just that the water line has shifted.

The natural rise and fall of the ocean at the beach is an excellent demonstration of gravitational forces exerted by the Sun and the Moon. Although the tidal force is small, it is strong enough to pull regularly on the ocean, making an enormous volume of water rise and fall.

What you might not know is that tidal forces from the Sun and Moon also influence the air we breathe and the solid ground we stand on. These effects are referred to as atmospheric and Earth tides.

While we don’t tend to notice Earth and atmospheric tides, they do affect both the land and the world’s largest freshwater resource located underneath our feet: groundwater. This occupies the pores that exist in geological materials such as sand or soil, much like water in a kitchen sponge.

We have developed a method that incorporates tidal influences to monitor our precious groundwater resources without the need for pumping, drilling or coring.

Water beneath our feet

It has been estimated that groundwater makes up 99% of the usable freshwater on Earth. If all of Earth’s groundwater were extracted and pooled across the world’s land surface, it would be enough to create a lake 180 metres deep.

While this sounds like a lot of water, it is important to remember that not all groundwater is available for use. In fact, groundwater is currently mined on a global scale, especially in drier parts of the world, where groundwater underpins human activities during times of drought.

Groundwater extraction can lead to a downward shift in the land surface level (known as “subsidence”), particularly if groundwater is removed from underground zones that contain soft clays. This is a significant global problem, especially in coastal areas, due to urbanisation and associated water demand.

Alternatively, a long wet period with excess rainfall can cause the groundwater to rise up and cause flooding.

Effect of tides on groundwater

Deeper groundwater buried underneath layers of different types of sediments is under great pressure (in groundwater terminology this is called “confined”). The gravity change from Earth tides squeezes the sediment, and therefore changes the pressure of the water in the pores.

The atmospheric tides add to the weight that is sitting on top of the groundwater and cause a change in stress that results in a downward squeezing.

Groundwater at that depth responds to these stress changes, which can be measured as tiny water level fluctuations inside a groundwater borehole.

We have developed a new approach that exploits these tidal influences to calculate important subsurface properties. For example, this can predict how the pressure is lowered when groundwater is pumped, and by how much the land surface would sink as a result of shrinking subsurface material (just like squeezing a kitchen sponge).

The method basically allows accurate calculation of the compressible subsurface properties from the groundwater response to Earth and atmospheric tides.

This development is significant because it will allow analyses of a subsurface water reservoir (called an aquifer) without human-induced stresses such as pumping or taking physical samples of the material through drilling or coring in addition to constructing a borehole.

All that’s needed for this analysis is a roughly 16-day period of continuous measurements of groundwater levels and atmospheric pressure at hourly intervals.

Groundwater levels are routinely recorded as part of water monitoring programs around the world and in Australia, as funded by the Federal Government groundwater NCRIS scheme. Atmospheric pressure is a standard parameter measured by weather stations, such as operated by the Bureau of Meteorology.

The effects of tidal forces on groundwater might be less apparent to us than their effects on the ocean, but they’re just as important. Our new method of understanding the influence of tides on groundwater significantly reduces the effort to predict the response to groundwater pumping and the potential for land subsidence.

This technique can make passive use of existing boreholes and could be applied to the global archive of groundwater levels to inform more sustainable groundwater resource development in the future.