Starquakes reveal surprises about birth of stars in our galaxy

A study of the internal sound waves created by starquakes, which make stars ring like a bell, has provided unprecedented insights into conditions in the turbulent gas clouds where stars were born 8 billion years ago. 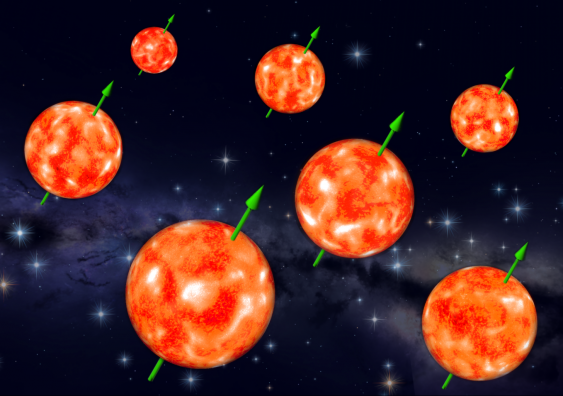 The spins of about 70% of the red giant stars observed in the clusters were strongly aligned in a study by researchers including Dr Dennis Stello.

A study of the internal sound waves created by starquakes, which make stars ring like a bell, has provided unprecedented insights into conditions in the turbulent gas clouds where stars were born as long as 8 billion years ago.

Astronomers used this asteroseismology approach to work out the orientation of the angle of spin of 48 stars in our galaxy, the Milky Way.

“The results were unexpected,” says study team member UNSW’s Dr Dennis Stello. “We found that the spins of most of the stars were aligned with each other.

“Previously it had been assumed that massive turbulence would have scrambled the rotational energy of the clouds where the stars were born, and prevented this alignment.

The study, by an international team led by Dr Enrico Corsaro, a former PhD Student of Dr Stello who is now at the Obervatorio Astrofisico di Catania in Sicily, is published in the journal Nature Astronomy, with an illustration of the project on the cover.

Stars are born when massive clouds of gas and dust collapse – a violent process that generates clusters of stars containing up to a thousand stars each.

Their analysis involved four years of observations of the stars made by NASA’s Kepler space observatory.

“The benefit of studying ancient star clusters is that the interfering dust and gas has gone, yet the stars still preserve the signature of the initial conditions in the cloud where they were born,” says Dr Stello, of the UNSW School of Physics.

“Our finding that the spins of about 70 per cent of the stars in each cluster are strongly aligned, and not randomly orientated as was expected, tells us that the angular momentum of the gas and dust cloud was efficiently transferred to the new stars.

“It’s remarkable that the imprint of these initial conditions can still be seen billions of years later, by studying tiny oscillations in stars that are many light years away,” he says.