Opinion STEM is worth investing in, but Australia's major parties offer scant details on policy and funding

We've had 10 federal ministers with titular responsibility for science since 2007 – five under the Coalition and five under Labor. That variation and a lack of consistent vision has an impact. 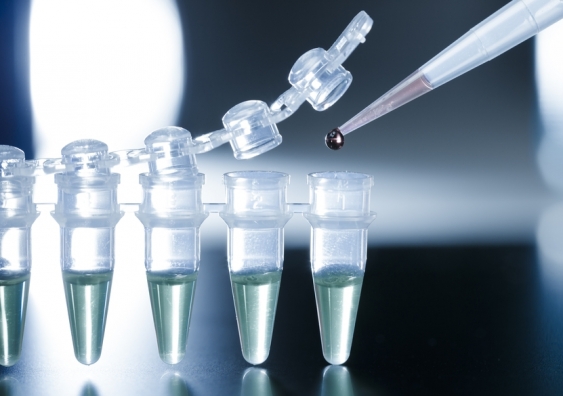 Evidence from around the world shows that public investment in science, technology, engineering and mathematics (STEM) can advance nations towards a strong economy, a healthy population and a sustainable environment.

To achieve this, however, countries need ambitious, internationally competitive levels of investment in research and development, stable leadership for the sector within government, and a long-term, whole-of-government strategy for science.

Although Labor has announced clear targets for public investment in research and development, very few of the critical details of a vision for STEM have been outlined by any party in 2019 policy statements.

The current government has not told us much about their short- and long-term plans for Australia’s STEM sector. This is important to note given the National Innovation and Science Agenda (NISA), launched in 2015, is due to wrap up this year.

To date the Coalition’s campaigning has focused on:

We’re yet to see concrete figures from the Coalition for public investment in research and development.

Labor has committed to increase investment in research and development to 3% of GDP by 2030, and to establish a review of research priorities (disclosure: Emma, an author on this analysis, will be a panel member for this review). Labor hasn’t yet named any specific figures or areas of focus for the review.

Neither the Coalition nor Labor has outlined how it plans to fund its STEM ambitions if it forms government following the May 18 election.

Australian government investment in scientific research and the people and facilities that make it possible has had a few major setbacks in the past decade. This occurred in part due to the global financial crisis, and in part due to a push to shift greater responsibility for research and development support to the private sector. 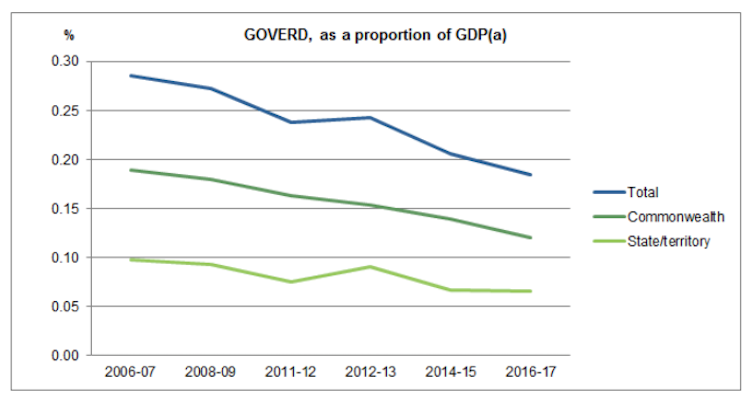 Government expenditure on research and development (GOVERD) has declined since 2006/2007. ABS (screenshot April 10 2019)

At present, investment in research from both government and the private sector is dropping, with the latest figures indicating only 1.8% of GDP – well behind similar nations in the OECD.

The most recent relevant announcement around critical funding for research infrastructure in 2018 was welcome, but otherwise overall investment remains a critical gap.

The 2019 budget and budget response were, in effect, election pitches – and both clearly signalled that science and technology are not front of mind for our major parties.

The Coalition promised generous provisions for medical research, but cut support for university research and sought to reassign the A$3.9 billion education investment fund.

Labor’s Budget reply highlighted the need for STEM skills for our future workforce, focused heavily on VET. It said little about the future of research and development.

Science and technology has lacked strong, stable leadership within government for many years.

Symbolically, we’ve had ten federal ministers with titular responsibility for science since 2007 – five under the Coalition and five under Labor.

We have also had prolonged stints without a named science minister in the federal cabinet, the two most recent being under Malcolm Turnbull in 2017 and Tony Abbott in 2013.

Read more: No science minister, and it's unclear where science fits in Australia

Over the past 30 years, we have struggled to achieve unified, bipartisan support for science and technology in the halls of parliament. In key areas – such as research infrastructure, application of the research and development tax incentive, and industry growth centres – Labor and the Coalition have often worked at cross purposes.

The most positive step in recent years was the launch of the National Science Statement under Prime Minister Turnbull in 2017. This signalled intentions to take a holistic government approach to the sector and provide meaningful direction for the years ahead. This promise is yet to be realised.

This is particularly concerning, given the National Innovation and Science Agenda – the current framework for supporting scientific research and development in Australia – will expire in 2019. This framework will not take shape without a champion for science at the decision-making table, someone who can articulate the value of STEM for Australia’s prosperity.

A quick look at Australia’s recent history in STEM strategy is revealing for its variability.

Following years of cuts to research in the 1980s, and after public protests by scientists on the streets of Canberra, Bob Hawke included in his 1990 election campaign the words:

[…] no longer content to be just the lucky country, Australia must become the clever country.

Under the next Labor Prime Minister, Paul Keating, investment in research and development began to climb. Even though his government’s main focus was the arts and the economy, and there was little narrative left for STEM, actual support for science remained relatively strong.

Read more: Infographic: how much does Australia spend on science and research?

With Keating’s demise and the election of John Howard’s Coalition government, support for basic science was consolidated with the establishment of the National Collaborative Research Infrastructure Strategy (NCRIS) in 2004. Howard’s government invested in research at the pace of inflation, and sought to strike a balance between curiosity-driven and applied research.

During the Rudd-Gillard-Rudd years, government investment grew in both STEM education and facilities, facilitating both curiosity-driven and applied research and development.

The introduction of the Education Investment Fund and the Super Science Initiative brought A$5.2 billion in public investment for university research programs, research institutes, and infrastructure-building projects including the Square Kilometre Array.

Labor-led public discourse was predominantly focused on primary and secondary education, covering issues such as quality of STEM education, the shortage of maths and science teachers and falling enrolments in STEM subjects.

It was during this time Labor also introduced the demand-driven system of funding university education. This system removed caps on funding for bachelor degrees, and resulted in a positive gain for STEM courses.

The critical balance of supporting both curiosity-driven and applied research began to tip towards application when Tony Abbott became Prime Minister and amped up Australia’s medical research capability with the ambitious medical research future fund (MRFF) in 2014.

Focused on the translation and commercialisation of medical research, this fund increased the weighting on the applied end of the research spectrum; a shift that was reinforced by the “ideas boom” of his successor, Malcolm Turnbull.

The ideas boom lynchpin was the National Innovation and Science Agenda (NISA), launched in 2015.

However, we also saw substantial job losses for climate scientists at the CSIRO and a trend of failing to support public research agencies at the same pace as inflation. Since then, public investment in curiosity-driven research has continued to decline.

In 2015 then Minister for Education Christopher Pyne threatened to cut off funding for the critical research facilities in NCRIS. This was avoided when the research sector presented a very public, very vocal united front, through the National Research and Innovation Alliance led by Science & Technology Australia and the Australian Academy of Science.

Most recently, we have seen a freeze to education’s demand-driven system, significant cuts to research support funding, and attempts to seize A$3.9 billion from the now defunct education investment fund to fund the National Disability Insurance Scheme – which did not succeed – and a subsequent redirection into a proposed emergency response fund (announced in the latest Federal Budget).

This inconsistency and lack of unity over many years has led to reactivity from our sector, rather than strategic long-term planning. This may not change in the near future, regardless of who wins the 2019 federal election. But we certainly hope it does.

Research and ministerial vetoes: here’s one idea for an independent, accountable grant scheme

Australia has lost 140 journals in a decade. That’s damaging for local research and education