A piece on the effects of placebo surgeries and the birth of randomised trials has been awarded the 2018 Bragg UNSW Press Prize for Science Writing. 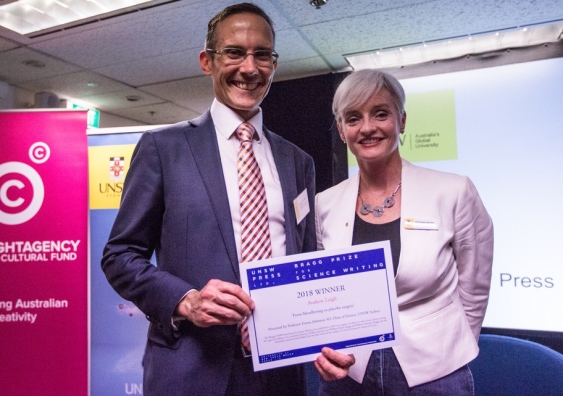 Dr Andrew Leigh MP has won the 2018 Bragg UNSW Press Prize for Science Writing with ‘From bloodletting to placebo surgery’, an excerpt from his book Randomistas. The piece looks at the fascinating effects of sham surgeries and the history of randomised trials.

The $7000 winner’s prize was presented by Professor Emma Johnston AO, Dean, UNSW Science, at a ceremony hosted by UNSW Press and UNSW Science on Tuesday night.

Runners-up prizes of $1500 each were awarded to Jo Chandler for ‘Amid fear and guns, polio finds a refuge’ and Margaret Wertheim for ‘Radical Dimensions’.

The works all appear in The Best Australian Science Writing 2018, edited by journalist John Pickrell. The anthology contains all the winning and shortlisted entries among a collection of the year’s best writing from Australian science communicators.

UNSW Press CEO Kathy Bail welcomed the audience to the celebration. “This is the night when we recognise the achievements of those who can capture the imagination of the wider community.

“The book and the prizes support UNSW’s strategy to stimulate and inform public debate about issues that impact on the community.”

The importance of telling science stories

Professor Johnston, who presented this year’s prizes, said she was passionate about scientists telling their stories.

“It's so important that we have not only the scientists talking, but also professional writers really bringing us out of our shell and also taking a critical look at the way we might be presenting or selling our work.”

She also said the book was a great display of diversity – an essential ingredient of great science and science communication. 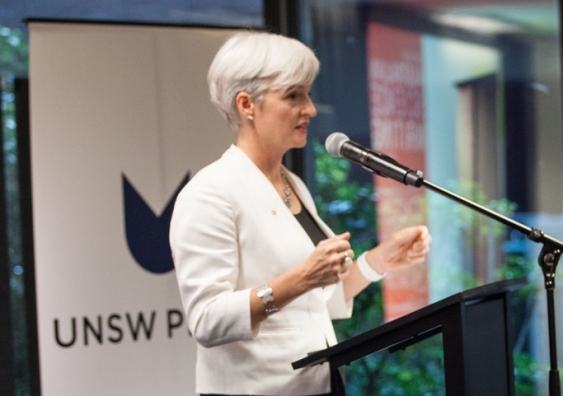 A call to be bold and innovative

Australian of the Year and Scientia Professor of Physics at UNSW, Michelle Simmons, launched the 2018 anthology – now in its eighth year – with a speech about the importance of science communication. She said diversity of thought and the ability to see things from different angles taught us about the way the world is, and who we are.

“Many different ways of observing the world are beautifully captured in this book. I have loved reading through the short stories. They’re designed to provoke thought, they're to be savoured, really, one by one.” 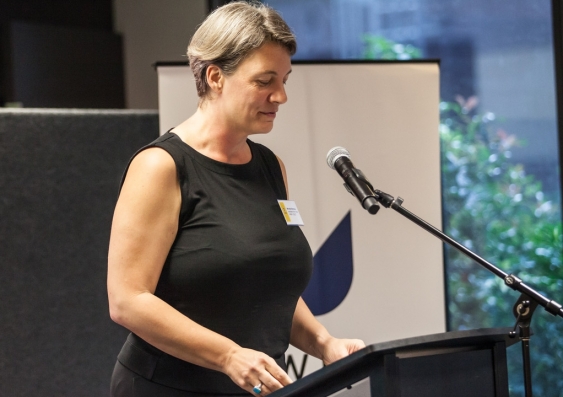 Professor Simmons also spoke about the necessity for Australia to develop its own brand – one that’s known not just for the beauty of our natural environment, our great lifestyle, and the easy-going nature of our people, but also for us being tireless, bold and innovative.

“Australian scientists are achieving amazing results and across a number of fields, they're leading the world. They're succeeding because Australia offers a culture of academic freedom, openness to ideas and an amazing willingness to pursue goals that are ambitious. We don't always promote this – yet it's our duty to spread that word.

“By reading stories such as the ones collected each year, we can share with everyone the wonderful things that are happening here, and the fascination that many Australians feel for new ideas around the world.

“Science writers play a unique function in this regard – it's a specialist skill, the ability to capture a complex idea in a way that is both clear and compelling. Curiously, Australia has produced more than its fair share of superb science communicators. Many of them are professional scientists in their own right, and all are great advocates for science, and for a reimagined Australia.

“With our inherent scepticism towards dogma and our openness and collaborative spirit, Australians are natural discoverers. We’re also problem solvers who are getting things done. Telling inspiring stories about science will surely inspire us all, and strengthen this attribute.”

In a panel discussion, the winner and one of the runners-up of this year’s prizes discussed key themes and insights of their winning pieces, and what inspired them. This year’s winner, Dr Andrew Leigh MP, said the sheer sense of joy and awe connected to science – and the humans conducting it – appealed to him.

“It’s that sense that science expands our notion of possibilities … I think it's about finding the people – the stories of how the researchers came at their work are amazing, for example, the tale of how scurvy was finally cracked through a randomised trial.

“It’s the notion that a simple experiment could unlock wisdom that is enormously appealing to me. The worst of politics is where it's purely driven by ideology. I think of randomised trials as being that area where modesty meets numeracy and the idea that we can bring a whole lot more evidence and a little less ideology to our decision making was enormously appealing.” 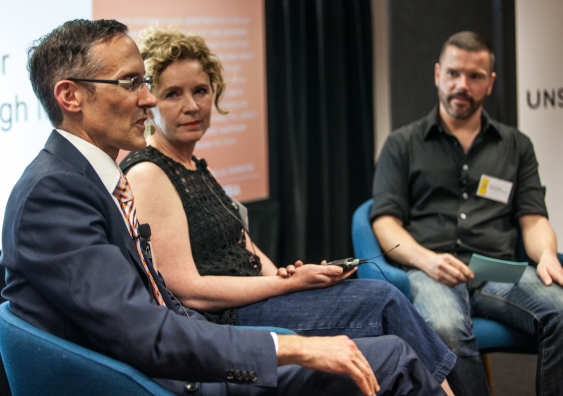 One of the runners up, journalist Jo Chandler – who wrote an investigative piece reporting from Nigeria on polio vaccine workers – compared the logistics of fieldwork with the act of science writing.

“Sometimes we parachute into a geography, a culture that we're unfamiliar with. The same happens with science writing: sometimes we might just jump into something we know nothing about and we have to navigate our way rapidly through this whole field.

“I'm a journalist, I'm not a scientist, I'm used to diving into realities that are completely baffling in lots of ways and humbling myself to have to figure out what is going on here, what are the dynamics at play, what do I need to know, what do I need to be careful of, how do I get it right, and how do I communicate what is a really interesting issue.” 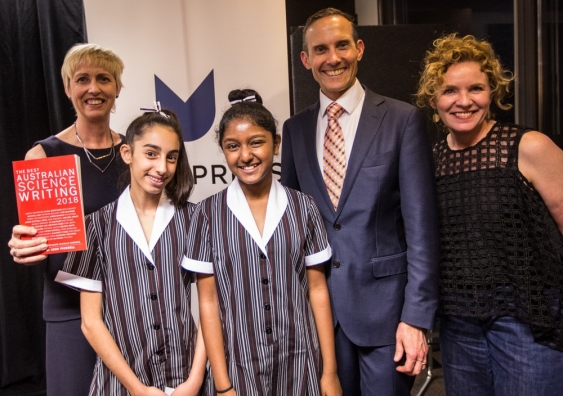 The two student runners-up were Coco Dwyer and Ruby Mumford from Star of the Sea College, Victoria for their essay ‘Technology is not only all around us, it’s inside us’, and Sienna Ters from Santa Sabina College, NSW for ‘Celebrating 40 years of MRI technology, and why we need it more than ever’.

The Bragg UNSW Press Prize for Science Writing is an annual prize for the best short non-fiction piece on science written for a general audience. It is named in honour of Australia’s first Nobel laureates, William Henry Bragg and his son William Lawrence Bragg.