The planet's evolution and ‘microbial poop’ were just some of the wide ranging topics US mineralogist Dr Robert Hazen covered at the UNSW Centre for Ideas event last night. 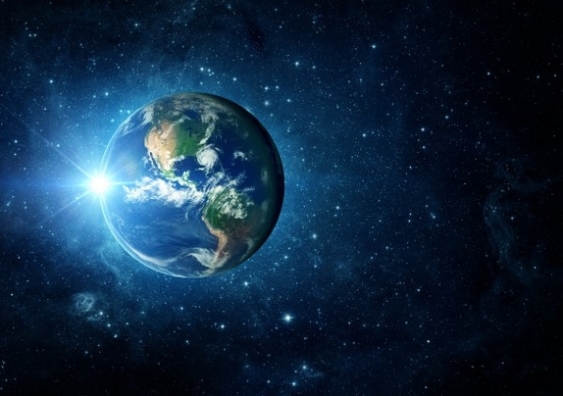 Earth, seen here from the moon, has gone through 10 stages of mineral evolution, according to Dr Robert Hazen from Carnegie Institution of Washington’s Earth and Planets Laboratory. Credit: Shutterstock.

When acclaimed US mineralogist Robert Hazen was a young boy, he always collected and organised things like stamps or coins. But then he started collecting fossils and minerals, and he realised they told a story.

“That rock came from some place, it was born at some point, it evolved in certain ways … I became fascinated with those stories,” the Senior Staff Scientist at Carnegie Institution’s Geophysical Laboratory, and the Clarence Robinson Professor of Earth Sciences at George Mason University, said during a UNSW Sydney Centre for Ideas event last night.

Dr Hazen was interviewed by Martin Van Kranendonk, who is Professor of Geology and Astrobiology at UNSW Sydney, and is the Director of the Australian Centre for Astrobiology.

Prof. Van Kranendonk has also spent a large part of his life mapping rocks: specifically the ancient rocks of Australia, South Africa, and Greenland, and has shared this knowledge with geoscientists from around the world on his famous ‘Grand Tour’ fieldtrip across Western Australia, where he first met Robert Hazen in 2014.

Dr Hazen told Prof. Van Kranendonk how his childhood rock collections sparked his interest for a career in geology and his research journey that led to one of the great stories in earth science, the idea of mineral evolution. The idea was sparked by a question at a 2006 Christmas party.

“We think that life arose during this period of early Earth history called the Hadean,” he said.

“And many people are postulating that clay minerals played an important role. And (a Professor friend) said ‘if clay minerals didn’t exist in the Hadean, then those hypotheses can’t be right’.

“I had never heard anyone ask that question … Nobody ever asked ‘what was the first mineral in the cosmos?’.”

In 2008, he and seven co-authors wrote a journal paper which came up with the idea that the earth has gone through 10 stages of mineral evolution.

“At each stage, some new process or event or characteristic came into play that change or altered the near surface, diversity and distribution of minerals,” Dr Hazen said.

“The biggest punchline of that paper was that more than half of all minerals on Earth are a consequence of living systems,” he said.

“Life changes Earth’s environment; every aspect of geology and hydrology and mineralogy is influenced in ways that we really hadn’t articulated before.”

Dr Hazen described how the colours of Earth changed from its beginnings four and a half billion years ago, when it was a black planet “covered in black basalt, this heavy, dense rock with cracks of bright red incandescence as lava poured out of various fissures and volcanoes” to the land eventually turning green with “the evolution of green plants”.

“These colour changes are emblematic of how amazing the evolution of our planet has been, how it’s gone through many stages, each one a consequence of what came before, each one leading to what comes next,” he said.

Asked to explain how a carbon bearing rock came to be at the top of Mount Everest, he said continental masses and plates moving over a hundred million years could be responsible.

“What you’re seeing is a limestone formed as part of a coral reef, much like the Great Barrier Reef … sometimes when two continental plates collide, they carry with them coastal zones with coral reefs. You start getting mountains forming then crumpling together, they start raising and pushing together.”

He also discussed one of the world’s greatest uncertainties: climate change.

“What humans are producing now by burning and producing (carbon dioxide) is 10, 20, 50 times more than the most active volcanoes that have been going on,” he said.

“So we are suddenly tipping this whole process which was gradual, stately, well controlled, and we're skewing it by burning all of this buried carbon that was locked in the rocks, it was sequestered. It wasn't going anywhere. But when we burn coal, when we burn oil, when we burn natural gas, carbon that has been locked in the subsurface is suddenly brought back and put into the atmosphere very rapidly … The millions of years it took to make the coal that’s buried underground is  being reversed in a matter of decades.”

Dr Hazen was Executive Director of the Deep Carbon Observatory, a project set up to understand the chemical and biological roles of carbon in Earth, from 2009 to 2019.

"The Deep Carbon Observatory was really a large scientific program that was designed to understand the hidden 90% of carbon in earth," he said. 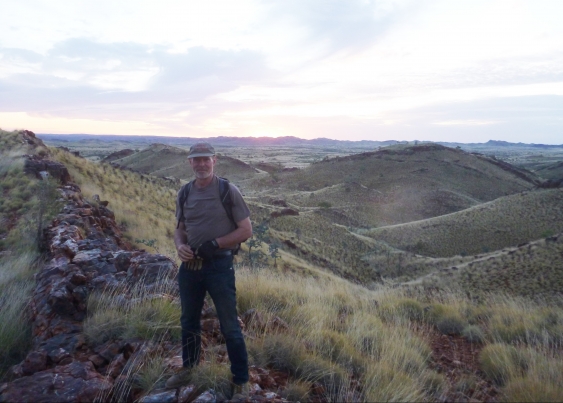 The project was important to gauge how humans were impacting Earth.

The baseline, he said, was that humans “are just completely overwhelming every other aspect of the carbon cycle, that what we're doing in the last century and a half, is just unprecedented in earth history … this is just scientific evidence that there is something fundamentally different about what we're doing.”

Prof. Van Kranendonk asked him about the mineral Hazenite, named after Dr Hazen and only found in Mono Lake, California.

“It’s a hyper saline lake, it’s got a very high concentration of phosphorous and some other elements, so high in fact that when microbes live in this lake they can’t survive unless they adjust their internal chemistry,” Dr Hazen said.

“One of the ways they do that is they excrete crystals, a crystal of an alkaline phosphate which is Hazenite. So Hazenite is essentially microbial poop.”

Dr Hazen said he could have been a professional trumpet player.

He described some of his great science teachers, and also lamented the decline of students’ interest in science in high school.

Some science teachers don’t appreciate that the career is about asking questions, “it’s not about memorising answers”, he said.

“You need to have mentors … who take students in hand and say ‘you’ve got great questions, let’s see if we can figure out an answer’.

“The most exciting thing in science is ‘I’ve got a question’ … if you can come up with a question that no one has ever thought to ask before, you will be a great scientist.” 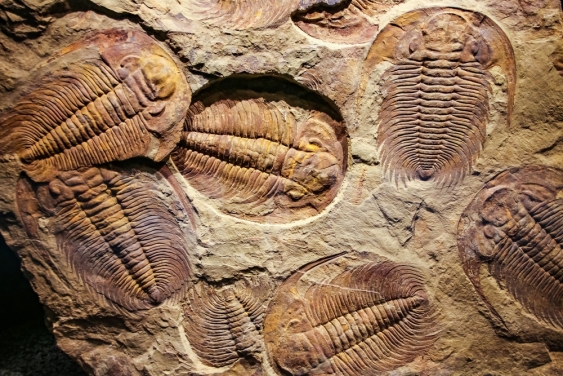 The collection of almost 1000 different species from six continents has been donated to the Smithsonian Museum of Natural History.

He said one of his life’s favourite moments was watching a young boy stare in awe at his collection in the museum.

“That was me when I was a seven or eight year old, going to the museum, looking at the specimens,” he said.

“What better way to pass it forward than to give something that might inspire another young person to become a scientist.”