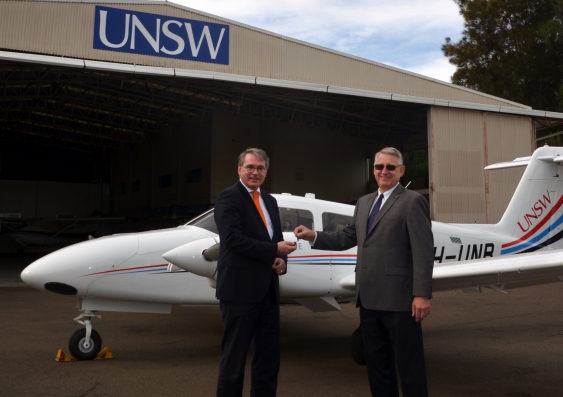 L-R: Head of the UNSW School of Aviation Professor Gabriel Lodewijks and Vice-President of Aircraft Sales for Airflite Nick Jones

The Piper PA-44 Seminole has two 180 horsepower engines, a cruising speed of about 300 kilometres an hour and a range of about 1300 kilometres. It is required for training so UNSW Aviation students can gain industry qualifications such as a multi-engine instrument rating.

Vice-President of Aircraft Sales for Airflite, Nick Jones, handed over the keys of the aircraft to the Head of the School of Aviation, Professor Gabriel Lodewijks, at a ceremony at the School’s facilities at Bankstown Airport, which was attended by current flying students.

Mr Jones said Airflite was proud to have an association with UNSW Science and be able to provide the new Piper Seminole. “We hope the aircraft provides you with excellent service for many years. And we wish the students the very best for their future careers,” he said.

Professor Lodewijks thanked everyone involved in the acquisition of the plane, and said its purchase was important for maintaining the high quality of the school’s academic programs and research.

This aircraft “will allow us to raise the next generation of UNSW pilots. I hope they and their instructors have many safe and pleasant flying hours,” he said. 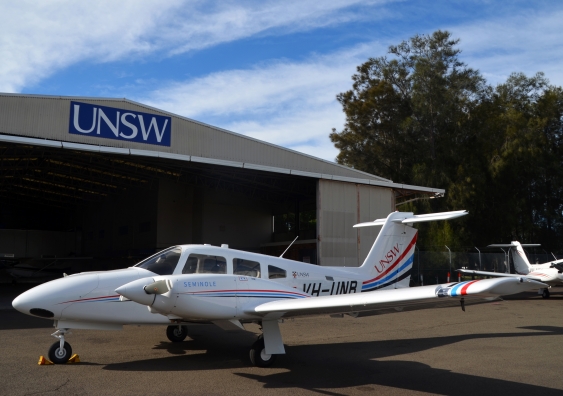 Former Head of the School of Aviation, Professor Jason Middleton, said the Piper Seminole was renowned as a very reliable aircraft and was fully fitted for flying under instrument flying conditions. “It can be flown into Sydney airport on a dark and stormy night, just like any big airline aircraft," he said.

UNSW student pilots Mitchell Needham and Tahla Robinson said they were excited to be able to fly a brand new aircraft with state-of-the-art avionics.

UNSW owns six single-engine Diamond DA40 aeroplanes, leases another Piper Seminole for training, and has an older Piper Seminole that is used for airborne research, including laser surveying of NSW beaches.

The new aircraft was built in Florida, where it was test flown prior to being dismantled for road transport across the US, then shipped to Perth. It was reassembled and test flown in Perth, then flown to Sydney, and test flown again by UNSW pilots.