Large gaps in the representation of women in science careers later in life are not due to lack of ability in the classroom. 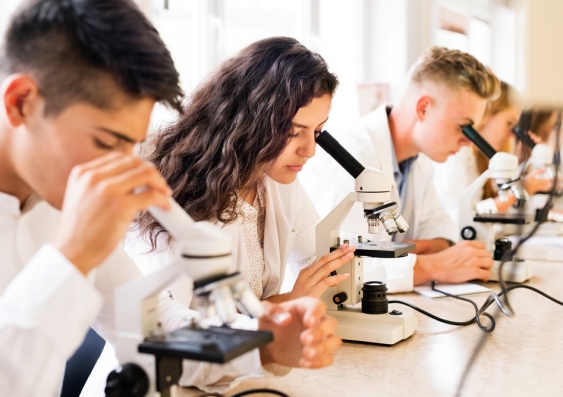 Boys and girls perform about the same in STEM at school so why the gender gap later in life? Image from Shutterstock

There is a stubborn stereotype that maths and science are masculine.

But our study of the school grades of more than 1.6 million students shows that girls and boys perform similarly in science, technology, engineering and maths (STEM) subjects.

The research, published today in Nature Communications, also shows that girls do better than boys in non-STEM subjects.

Our results provide evidence that large gaps in the representation of women in STEM careers later in life are not due to differences in academic performance.

One explanation for gender imbalance in STEM is the “variability hypothesis”. This is the idea that gender gaps are much larger at the tails of the distribution – among the highest and lowest performers – than in the middle.

Genius and eminence have long been considered the domain of men. Parents ascribe giftedness to sons more often than to daughters. Children think girls are less likely than boys to be “really, really smart”. And fields that value “giftedness”, such as maths and philosophy, employ fewer women.

Greater male variability was first proposed as an explanation for men’s superiority in the 1800s, and the idea never disappeared.

In 2005 the variability hypothesis regained prominence. American economist Lawrence Summers, who was then the president of Harvard University, listed greater male variability as a key reason for why there were more men in top science and engineering positions. He said:

…in the special case of science and engineering, there are issues of intrinsic aptitude, and particularly of the variability of aptitude, and that those considerations are reinforced by what are in fact lesser factors involving socialization and continuing discrimination.

Backlash against these comments was swift: Summers was reviled and subsequently apologised.

But was he right?

What the grades say

One of us (Shinichi Nakagawa) co-developed a powerful method to test for differences in variation between groups in a meta-analysis.

We applied this method to test for greater male variability in academic performance, using data from many studies.

We searched the scientific literature and found information about the grades of more than 1.6 million students, awarded between 1931 and 2013, from 268 different schools or classrooms. Most of these data were for English-speaking students from around the world, with the majority based in North America.

For each group of students, we calculated the difference between girls and boys in both average score and variability.

In STEM subjects, we found the distributions of grades for girls and boys were very similar. The biggest gender gaps were in non-STEM subjects such as English, where girls earned 7.8% higher average grades and 13.8% less variable grades than boys.

The results of our analyses of gender differences in average grades (green) and variability in grades (purple). The green points to the right of the dashed vertical line indicate higher average grades for girls, and purple points to the left indicate lower variability in grades for girls. The bottom axis shows the percentage difference between girls and boys. Rose O’Dea, Author provided

We then used our estimates of gender differences to simulate the distributions of girls’ and boys’ high school grades, to explore whether the 7.6% greater male variability in STEM is sufficient to explain why women are underrepresented in these fields from the beginning of university.

Our results from the simulation suggest the top 10% of a STEM classroom would contain equal numbers of girls and boys.

Given that being in the top 20% is sufficient to enter a science degree at a highly ranked university, the small gender gap in variability cannot directly account for the gender gap in undergraduate students choosing to study maths-intensive STEM subjects. 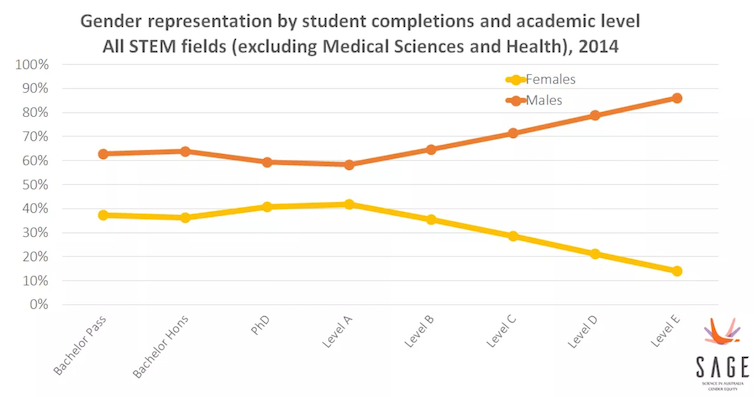 Lawrence Summers was not entirely wrong – there are “gender differences in variability of aptitude”.

It is true that among extremely high achievers we would expect to see more males, based on greater male variability producing more males at the extreme tails of the achievement distribution. But is a career in STEM restricted to these very high achievers?

We don’t think so. Successful scientists are generally ordinary, hardworking people. Unfortunately the false belief that exceptional ability is required for some STEM fields may be helping to perpetuate gender inequalities.

Gender differences in academic performance exist, but we shouldn’t overemphasise their importance. There are more than enough talented girls to close the gender gaps in STEM. But these girls have other options, because they are likely to be talented in non-STEM subjects too.

Women in STEM face hurdles that have nothing to do with their abilities, such as stereotypes, backlash, discrimination, and harassment. Until these hurdles are toppled, we should not use the small gender difference in variability as an excuse for under-representing women in STEM.