Farmers and other workers who ride quad bikes are being strongly encouraged by UNSW scientists to participate in a new online survey to assist with research into the safety of quad bike use in the workplace. 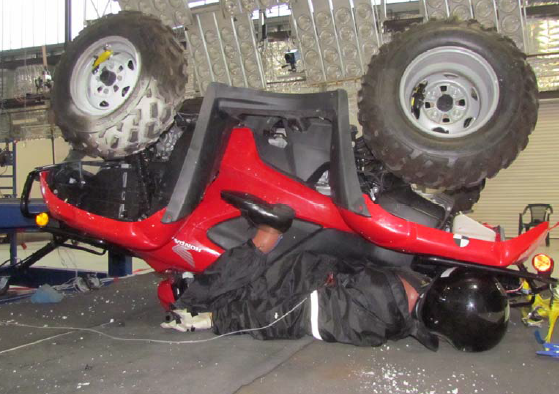 UNSW tests with quad bikes and dummies show how bikes can crush a driver in a rollover.

Farmers and other workers who ride quad bikes are being strongly encouraged by UNSW scientists to participate in a new online survey to assist with research into the safety of quad bike use in the workplace.

The independent Quad Bike Workplace Safety Survey is being undertaken by the Transport and Road Safety Research Centre at UNSW in response to a recommendation by a 2015 coronial inquiry in NSW into the deaths of 11 quad bike riders in the state. The study is funded by SafeWork NSW.

The confidential UNSW survey, which only takes between 15 and 25 minutes to complete, is found here.

Since 2001, more than 220 people have been killed in quad bike related crashes in Australia, and thousands more have been seriously injured.

Quad bike accidents are the leading cause of death on Australian farms, having overtaken tractor accidents more than five years ago. Nine out of ten quad bike workplace deaths occur on farms, according to the Australian Centre for Agricultural Health and Safety.

We need to understand how quad bike rollovers and other crashes occur, what injuries people sustain and how some people manage to escape injury in those crashes.

“The tragic tide of death and serious injury affecting Australian farmers and other workers who use quad bikes needs to be stemmed,” says project leader UNSW Professor Raphael Grzebieta.

“We know farmers are mainly being killed by rollover crashes. A lot of them die simply because the weight of the quad bike stops them from being able to breathe, which must be a terrible way to go.

“We need to understand how quad bike rollovers and other crashes occur, what injuries people sustain and how some people manage to escape injury in those crashes. The people who ride quad bikes for work are the only ones who can tell us what is happening out there in the real world,” he says.

“So we hope as many farmers and other workers as possible in NSW and across Australia will participate in the survey.”

Last week, the NSW Government also announced it will spend $2 million to reduce quad bike injuries and deaths on farms. It will offer rebates of $500 towards the purchase of compliant helmets, safer vehicles such as side-by-side vehicles, training courses and Operator Protection Devices.

To reduce the risk of quad bikes rolling on riders and trapping them in a rollover, some manufacturers have developed roll-bar-like devices that attach to quad bikes called Operator Protection Devices. Consumers, however, are confronted with conflicting advice about the effectiveness of these devices.

While the manufacturers of Operator Protection Devices are confident their products can save lives and reduce injuries, the Federal Chamber of Automotive Industries, representing quad bike manufacturers, has argued that the devices are not beneficial and may even cause more harm than good – striking riders or preventing riders separating from the vehicle in a crash.

At recent coronial inquests into quad bike deaths held in Victoria, Queensland and NSW, expert witnesses for and against the use of Operator Protection Devices argued their cases.

In handing down her findings into the deaths of 11 quad bike riders in NSW In November 2015, Deputy NSW Coroner Sharon Freund called for more research. She recommended an independent “real life” study be conducted to assess the benefits, risks and general efficacy of the protection devices.

Professor Grzebieta says: “Outcomes from this new UNSW study will answer some very important research questions about quad bike safety that can only be answered through a comprehensive survey of workplace quad bike users. While our research indicates overall benefits of such Operator Protection Devices, the best measure of their safety performance will come from this real world data.”

In previous research, the UNSW team examined 53 quad bike fatalities on farms between 2000 and 2012 in detail and found that 85% involved a rollover. In 65% of cases, the rider was pinned by the bike in some way. Almost half of the pinned fatalities were caused by asphyxiation.

The UNSW team also recommended a workplace survey as a result of their earlier $1.3 million Quad Bike Performance Project, which assessed the stability, handling and crashworthiness of quad bikes.