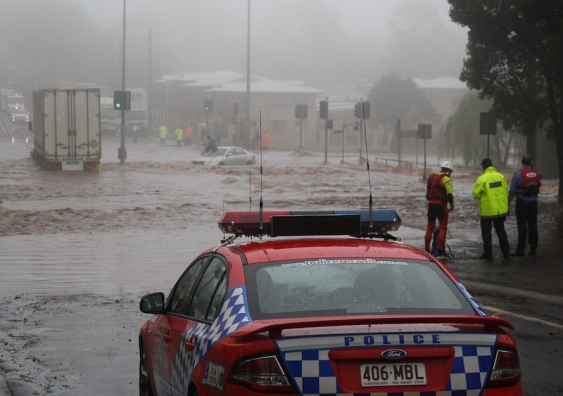 Emergency responders discuss options for rescuing a woman trapped on the roof of her car in flood waters during the 2010-2011 Queensland floods. (Credit: Timothy Swinson/Flickr)

Civil engineers from the UNSW Water Research Centre have analysed close to 40,000 storms across Australia spanning 30 years and have found warming temperatures are dramatically disrupting rainfall patterns, even within storm events.

Essentially, the most intense downpours are getting more extreme at warmer temperatures, dumping larger volumes of water over less time, while the least intense periods of precipitation are getting weaker. If this trend continues with future warming, the risk of flooding due to short-term extreme bursts of rainfall could increase even if the overall volume of rain during storms remains the same. The findings were published today in the journal Nature Geoscience.

“These more intense patterns are leading to more destructive storms, which can significantly influence the severity of flood flows,” says lead author and PhD candidate Conrad Wasko, from the UNSW School of Civil and Environmental Engineering. “The climate zones we studied in Australia are representative of most global climates, so it’s very likely these same trends will be observed around the world.”

Previous studies have looked at rainfall volumes over the total duration of storms, but this latest UNSW study is the first to look at temporal rainfall patterns within storms. Australian Bureau of Meteorology data from 79 locations across the country were used instead of computer simulations.

“Our results were consistent across all the climate zones in Australia, regardless of season or storm type, without exception,” said co-author and UNSW engineer, Professor Ashish Sharma. “This was an unexpected finding, and it supports our hypothesis that increasing temperatures are changing rainfall patterns.”

“It means that most people in Australia can expect to see intensification in the magnitude of flash flooding in smaller catchments, particularly in urban or residential areas,” says Professor Sharma.

The paper quantifies this increase for a range of Australian cities representing different climates and finds that for a five degree Celsius temperature rise the flood peaks could increase by an average of 5% to 20% for a typical medium-sized catchment.

The increase in flood peaks are estimated to be about 19% for Hobart, 12% for Sydney, 10% for Perth, and 45% in Darwin, which has a tropical climate and a markedly different storm pattern than the other cities.

“The fact that these increases represent changes only in the intensity of rainfall within storms, and not the total volume of rain – which will also increase as temperatures warm – is concerning,” says Professor Sharma. “These results highlight the need for local councils to think about redesigning stormwater and road infrastructure, and updating guidelines about where it’s safe to build homes.”

The team analysed the 500 largest storms by rainfall volume from each of the 79 locations, taking into account near-surface temperatures at the time. These storms were then divided into five equal time-periods to determine when rainfall was heaviest.

Wasko says the next step is to incorporate the findings into a model that can predict rainfall in future climates. “That’s the big caveat,” he says. “Is our present-day climate indicative of potential changes to future climates? Or will we begin to see entirely new weather systems emerging as climates change?”

Why warmer storms could lead to more flooding than expected