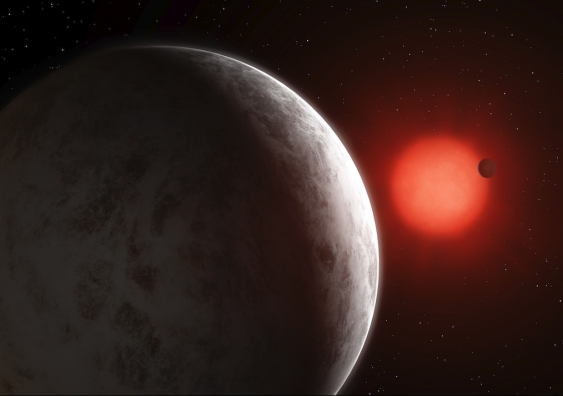 The international “RedDots” team – joined by Australian astronomers at UNSW Sydney, Macquarie University and University of Southern Queensland for this work – has detected a system of super-Earth planets orbiting the brightest red dwarf star in the sky, Gliese 887. The results were published in the journal Science today.

Super-Earths are planets more massive than the Earth, but substantially less massive than our local ice giants, Uranus and Neptune. The newly discovered super-Earths could be rocky worlds, and lie close to the “habitable zone” of this red dwarf star – i.e. the zone where water could exist in liquid form on a planetary surface.

“The exciting thing about these planets are that they orbit a star so close to the Sun, and so very bright,” said UNSW-based planet hunter Prof Chris Tinney, who is a co-author on the paper. “We now know of thousands planets of Super-Earth-mass, or smaller. But most of those planets orbit distant and faint stars. Planets orbiting nearby stars are key for searches with future telescopes for both exoplanetary atmospheres, and eventually evidence for life.”

The team of astronomers monitored the red dwarf, using the HARPS spectrograph at the European Southern Observatory in Chile, and then combined that data with data from the Anglo-Australian Planet Search (using the 3.9m Anglo-Australian Telescope near Coonabarabran), the Planet finder Spectrograph (on Cerro Las Campanas in Chile) and the HIRES instrument on the Keck telescopes on Maunakea, Hawaii.

Using a technique known as “Doppler wobble”, they measured the tiny back and forth motion of Gliese 887 due to the gravitational pull of its planets. The regular signals correspond to orbital periods of 9.3 and 21.8 days, which indicates the presence of two super-Earths – known as Gliese 887b and Gliese 887c. The team estimates the surface temperature of the outer planet (Gliese 887c) to be around 70oC.

Gliese 887 is around 11 light years away, making it one of the closest stars to the Sun. It is much dimmer than, and about half the size of, our Sun. This means its habitable zone is closer to Gliese 887, than Sun’s habitable zone (in which the Earth orbits).

The team discovered a few more interesting facts about Gliese 887 that turn out to be good news for both the newly discovered planets, and for astronomers studying them.

“The red dwarf has little in the way of starspots of other magnetic activity,” said Prof Brad Carter of the University of Southern Queensland. “If Gliese 887 were as active as many other red dwarf stars its stellar winds and activity would likely significantly erode any planetary atmospheres. So given the star is relatively inactive the newly discovered planets could be expected to retain their atmospheres”.

“The star Gliese 887 is also very stable”, said Prof Rob Wittenmyer, also from University of Southern Queensland. “The brightness of Gliese 887 is really very constant. This will make it much easier to detect the atmospheres of these super-Earths using coming space-based facilities like the James Webb Space Telescope – the successor to the Hubble Telescope, which is due to be launched soon.”

“In the era of space-based exoplanet-hunting telescopes like NASA’s Kepler and TESS, this result shows that astronomy from the ground continues to play a crucial role in our understanding of planets in our local neighbourhood,” said Dr Simon O’Toole, a co-author on the study from Macquarie University.

Dr Sandra Jeffers, from the University of Göttingen and lead author of the study, said: “These planets will provide the best possibilities for more detailed studies, including the search for life outside our Solar System.”