A proposal for 270m tall wind turbines on Robbins Island in Tasmania has ruffled some feathers – but here's why towering turbines are here to stay. 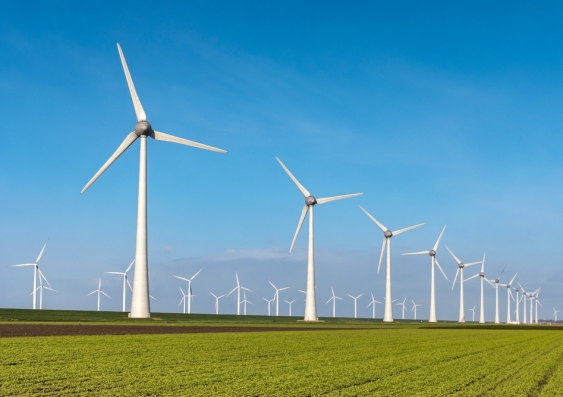 Wind towers are getting taller. Image from Shutterstock

Former Australian Greens leader Bob Brown made headlines this week after he objected to a proposed wind farm on Tasmania’s Robbins Island. The development would see 200 towers built, each standing 270 metres from base to the tip of their blades.

Leaving aside the question of the Robbins Island development, these will be extraordinarily tall towers. However, they fit right in with the current trend for wind turbines.

Wind turbines come in many designs, but the most common is the so-called “horizontal axis” kind, which look like giant fans on poles. This type of turbine is highly efficient at turning the energy in the wind into electrical energy. 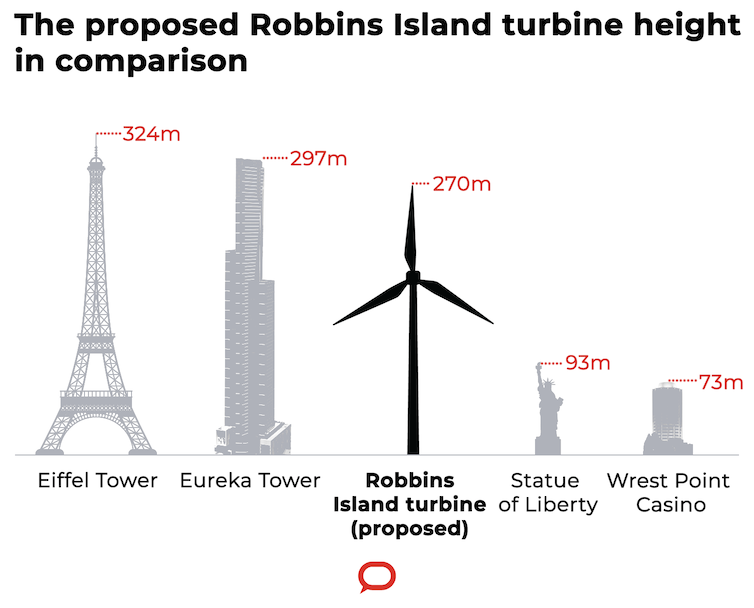 When it comes to wind turbines, bigger is definitely better. The bigger the radius of the rotor blades (or diameter of the “rotor disc”), the more wind the blades can use to turn into torque that drives the electrical generators in the hub. More torque means more power. Increasing the diameter means that not only more power can be extracted, but it can be done so more efficiently.

Larger and longer turbine blades mean greater aerodynamic efficiency. Creating more power in one turbine means less energy is lost as it is moved into the transmission system, and from there into the electrical generator. The economies of scale provide an overwhelming push for wind energy companies to develop larger rotor blades.

Wind turbines are also growing taller because of the way wind travels around the world. Because air is viscous (like very thin honey) and “sticks” to the ground, the wind velocity at higher altitudes can be many times higher than at ground level.

Hence it is advantageous to put the turbine high in the sky where there is more energy to extract. Hilly terrain (like a mountain ridge) may also distort the wind, requiring engineers to design the wind turbines to be even taller to catch the wind. Wind turbines used offshore are generally larger and taller because of the higher levels of wind energy available at sea.

Typically, onshore turbines (most common in Australia) have blades between 40m and 90m long. Tower heights are usually in the range of 150m. Offshore turbines (those situated at sea and common in Europe) are much larger. 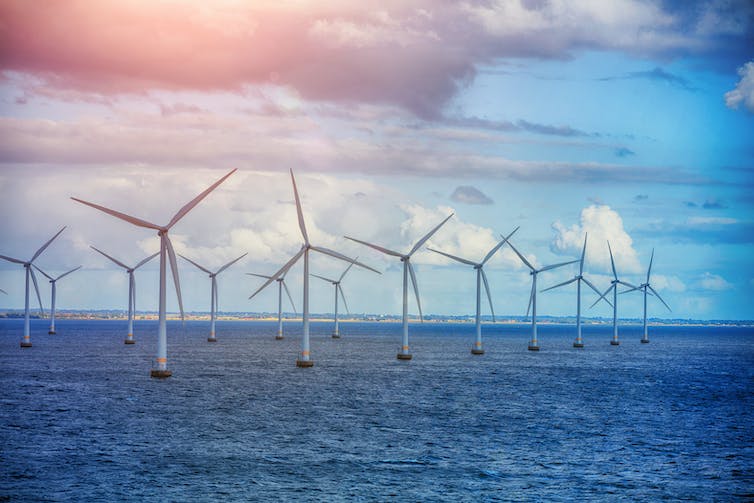 Offshore turbines are typically much larger than onshore towers. Shutterstock

One of the largest wind turbine designs in the world, General Electric’s offshore 12-megawatt Haliade-X, has 107m blades and a total height of 260m. As a comparison, Sydney’s Centrepoint tower is 309m tall.

If the Robbins Island turbines are indeed built to 270m, as reported in the media, they would eclipse General Electric’s behemoths. I cannot speak to the likelihood of this, but I would assume engineers will have to select the best turbine for the prevailing wind conditions and existing infrastructure.

The quest for bigger and taller turbines comes with its fair share of engineering challenges.

Longer blades are more flexible than shorter ones, which can create vibration. If not controlled, this vibration affects performance and reduces the life of the blades and anything they are attached to, such as the gearbox or generator.

Materials and manufacturing techniques are constantly being refined to create longer, and longer-lasting, turbine blades. 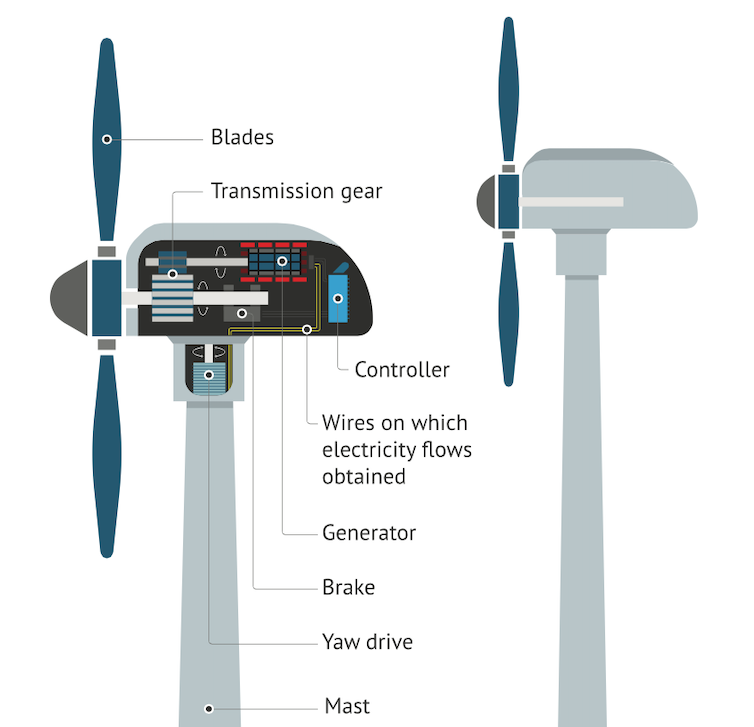 The longer the turbine’s blades, the more pressure is put on internal mechanisms. Shutterstock

As turbines grow, so too does the noise they make. The dominant source of noise occurs at the outer edge of the blades. Here, turbulence caused by the blade itself creates a “hissing” sound as it passes over the trailing edge. More noise is created when the blade chops through atmospheric turbulence in the wind as it blows into the tower.

Noise isn’t just a matter of size. If one turbine is placed in the wake of another, the sound of its blades passing through the highly turbulent air created by the upstream turbine will be very loud.

Keeping noise under control requires inventive solutions, such as borrowing ideas from nature: the silent-flying owl uses serrated feathers to control noise and these are now being used to make noisy turbines quieter.

Of course, engineering challenges are not the only considerations for creating wind farms. Environmental effects, noise, visual impacts and other community concerns all need to be considered, as with any large infrastructure project. But wind turbines are one of the most cost-effective and technologically sophisticated forms of renewable energy, and as the developed world comes to grips with climate change we will only see more of them.