Juno is the first spacecraft to orbit Jupiter by passing above both poles of the planet on each revolution, and is our best chance to shed light on many of the planet's unsolved mysteries, writes Lucyna Kedziora-Chudczer. 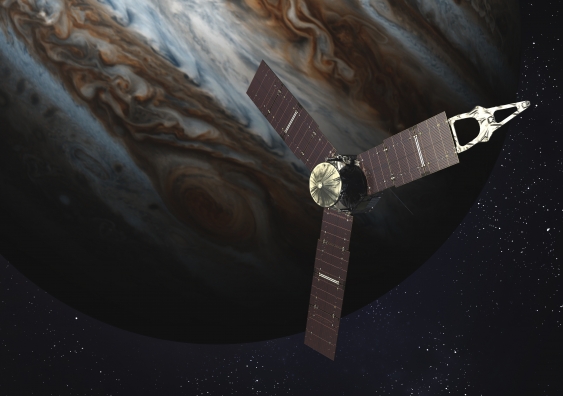 OPINION: After a five-year journey, NASA’s Juno spacecraft this week reached Jupiter and was successfully inserted into its orbit.

This is only the second spacecraft after the Galileo mission in 1995 to enter into orbit around the planet, the largest in our solar system.

Over the next eight years Galileo gave us an unprecedented view of the turbulent and stormy Jovian atmosphere. It detected intense lightning activity over regions much larger than typical storms on Earth.

Observations with its Near Infrared Mapping Spectrometer (NIMS) and imaging camera revealed the movement of clouds that resembled streaming jets along the banded structure of the planet. It found billowing updrafts and downdrafts and led to the discovery of ammonia clouds forming in the lower layers of the thick atmosphere of the planet.

One of the highlights of the Galileo mission was a release of a probe that descended into the swirling abyss of clouds. It was able to map the vertical profile of atmospheric pressure, temperature and composition until it melted and vaporised under the crushing pressure of the planetary interior.

The Galileo mission observations shed some light on Jupiter, its moons and rings. Juno’s visit promises the next step in the planet’s exploration. It picks up on many of the unsolved mysteries that still remain in our understanding of the Jovian system.

Juno is the first spacecraft to orbit Jupiter by passing above both poles of the planet on each revolution. It will cover different planetary longitudes on subsequent orbits.

This strategy takes the spacecraft into regions of high radiation that require additional shielding of on-board electronic equipment.

But it allows the most efficient mapping of the whole planet and will enable the monitoring of the most spectacular aurora displays in the solar system.

The auroras of Jupiter

Auroras on Earth and Jupiter can have a similar appearance but are both formed due to different processes. An aurora on Earth is light emitted from collisions between atmospheric molecules and energetic particles ejected in solar flares, the latter of which spiral down the Earth’s magnetic fields.

Jupiter has a much more powerful and rapidly rotating magnetic field that extends over the orbit of its tidally tormented moon, Io, which spits out energetic particles in volcanic eruptions.

The Jovian magnetosphere is rich in energetic charged particles that collide with molecular hydrogen, the main component of its atmosphere, thus generating auroral emission.

It is still not clear how Jupiter’s aurora is affected by the interaction of the planet’s magnetic field with charged particles from solar flares. Juno may be able to solve this mystery by making observations from within the planetary magnetosphere during times of increased solar activity.

Juno’s sensitive instruments (JEDI and JADE) can measure the flux of energetic particles and determine magnetic field, in situ, to characterise its strength and connections with lower layers of the planetary atmosphere.

Prevailing models of Jupiter’s formation suggest that the planet’s bulk composition should be similar to the composition of the sun, as both originated in the same solar nebula.

Instead, the Galileo probe that descended into deeper layers of the Jovian atmosphere found much lower amounts of helium and heavier elements than expected.

This was not the only surprise. The planet was thought to contain a substantial amount of water that, according to models of the Jovian atmosphere, should be detectable in the form of icy clouds below the layers of ammonia and ammonia hydrosulfide.

The Galileo probe did find some evidence of ammonia ice clouds but no traces of water ice were detected below them. One explanation suggests that the probe may have simply sampled one of the least clouded regions of Jupiter that was surprisingly windy and dry.

Juno’s Microwave Radiometer will be able to probe deeper layers of the atmosphere in many different locations to paint a clearer picture about the water ice concentration and its distribution.

Understanding the bulk composition of Jupiter, its atmospheric constituents and dynamics has implications that reach beyond our solar system.

In 1995 the first planet around a sun-like star was discovered and today there are close to 4,000 planets known that orbit other stars.

Many of these planets are so-called hot Jupiters that are as heavy and sizeable as Jupiter, but are located much closer to their parent star than Mercury is to the sun.

These planets are thought to have formed at larger distances from their star otherwise they could not have maintained thick hydrogen-dominated, Jupiter-like atmospheres. They probably migrated towards their star some time after formation.

Conditions on such hot planets are, of course, very different from what we are familiar with on Jupiter. But models that allow us to characterise hot Jupiters have to also work in the limit of the low temperatures found on Jupiter.

Juno will be able to map the internal structure of the planet by measuring its gravitational field. This will help us to answer questions about planet formation, whether it migrated from its original place and what halted this migration.

There are still many questions about the planet that remain unanswered including the one asked often by primary school children: “What gives Jupiter’s bands their colours?”

Juno has the best chance of answering this one too.