The growing threat of flash flooding as a result of more intense rapid rain bursts means the city needs to update its flood defences. 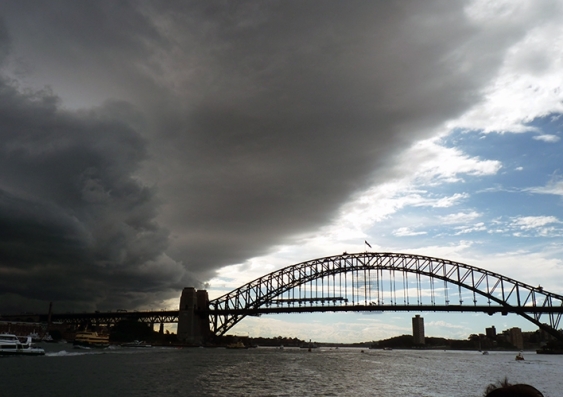 A series of major floods in Australia has made global headlines in recent years. People around the world were shocked to see Sydney, the city known for the 2000 Olympics, the Harbour Bridge, the Opera House, sunshine and Bondi beach culture inundated with flash floods this year. But were these floods a freak occurrence or a sign of things to come?

Our research has found an alarming increase of at least 40% in the rate at which rain falls in the most intense rapid rain bursts in Sydney over the past two decades. This rapid increase in peak rainfall intensity has never been reported elsewhere, but may be happening in other parts of the world.

Our findings, published today in Science, have major implications for the city’s preparedness for flash flooding. More intense downpours are likely to overwhelm stormwater systems that were designed for past conditions.

The chart below shows the increases in the rate of rainfall of rapid rain bursts for each of three weather radars (at Newcastle, Terrey Hills and Wollongong). All radars showed a rate of change of at least 20% per decade.

To increase our confidence, we also calculated the change for rapid rain bursts observed by two radars (Wollongong and Terrey Hills) at the same time. The rates of change in these storms are much higher (80-90% per decade) than for storms detected only by a single radar station.

One possible explanation could be these are more extreme storms that are well developed and can be seen by two radars simultaneously. So, it is possible that the change in rainfall rates for well-developed rapid rain bursts is even greater.

What are rapid rain bursts?

These events are typically highly localised. They can be a part of a larger storm or form independently. 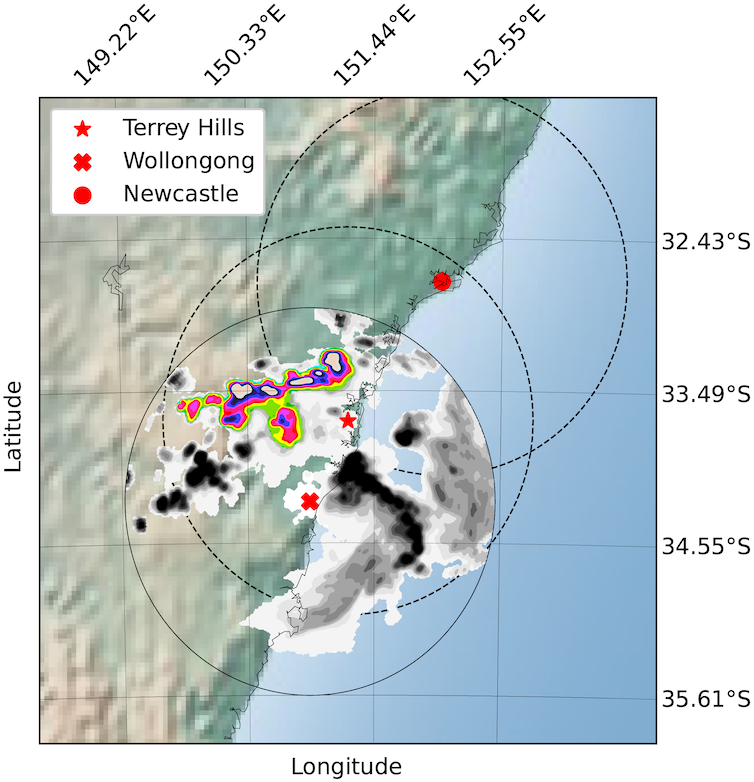 Rapid rain bursts can cause a huge amount of water to build up rapidly over a small region. This leaves almost no time for water to sink into the ground or be carried away by rivers and urban channels such as gutters and stormwater drains.

Flash flooding, especially in urban and steep mountainous regions, is one of the main destructive outcomes of these storms. The consequences include loss of human life, damage to property and infrastructure such as bridges and roads, crop and livestock losses, and disruptions to power and water supplies.

It has been difficult for meteorologists and climate scientists to investigate the structure of rapid rain bursts and their changes over time. The most recent report of the Intergovernmental Panel on Climate Change (IPCC) raised this as an issue to be overcome.

The main barrier is the small-scale nature of these events, which is hard for typical observational instruments such as rain gauges and satellites to capture. Climate models also cannot directly simulate rapid rain bursts. These difficulties limit our ability to understand and foresee changes in these events.

Weather radars are able to see these storms. However, they have not previously been used to study changes over time. This has been due to uncertainties about whether they measure consistently over time and difficulty in accessing the data.

The authors discuss their study and its findings.

Our collaboration with the Bureau of Meteorology developed a new method to overcome these limitations. We used Sydney’s weather radar maps produced by three overlapping radar stations (at Newcastle, Terrey Hills and Wollongong) over two decades. Benefiting from image-processing techniques, we identified and tracked storms observed by more than one radar at once.

All three radars confirmed a surprisingly high rate of change in the intensity of the strongest rapid rain bursts. The rainfall rate increased at least 20% per decade over the region. We found similar upward trends in short-duration peak rainfall in nine high-precision gauge stations in the region.

The graph below shows the rainfall rate of the top 5% of all rapid rain bursts detected separately in each radar each year, relative to the average for the whole period. (The figures shown for each radar are a ratio. It’s calculated by dividing the rainfall rate of the top 5% of rapid rain bursts each year by the average rate for such rain bursts over the whole period covered by that radar. This allows us to compare rates of change for radars with different calibrations and configurations.)

For the Wollongong radar, the average rate of these rapid rain bursts for the past 20 years is around 35mm per hour. The average values for Terrey Hills and Newcastle radars are around 60mm/hr and 25mm/hr, respectively.

What does this mean for infrastructure?

This high rate of change is concerning, but also scientifically fascinating.

It’s concerning because flood control infrastructure has been designed according to rainfall observed years ago. This change in rain bursts hasn’t been considered properly in design standards for structures such as drains, channels, detention basins and coastal flood defences.

An intensification of 40% in only two decades means we must re-evaluate existing flood-control systems and standards. We also need to explore whether it is happening elsewhere or unique to Sydney.

Despite the dramatic increase in the intensity of rapid rain bursts, we found little if any change in daily or even hourly rainfall over the same region.

It’s not clear why such large changes in precipitation bursts could happen without changes in the average rainfall over whole storms. This finding indicates that we have more to learn.

Although the reasons for this unexpected change in rapid rain bursts are still unknown, we showed it can’t be explained by regular climate variabilities such as El Niño–Southern Oscillation, Indian Ocean Dipole and Southern Annular Mode. Ruling out these explanations leaves climate change as a plausible factor in these changes. Further research into storms is needed to understand the underlying contribution of climate processes.

The next step is applying this new technique of weather radar analysis more broadly, including other cities around the world, to explore the possible causes of this alarming change in our storms.