For their outstanding research on psychological responses to trauma, recycling science, and nanomaterials, three UNSW scientists have been elected as Fellows of the Australian Academy of Science. 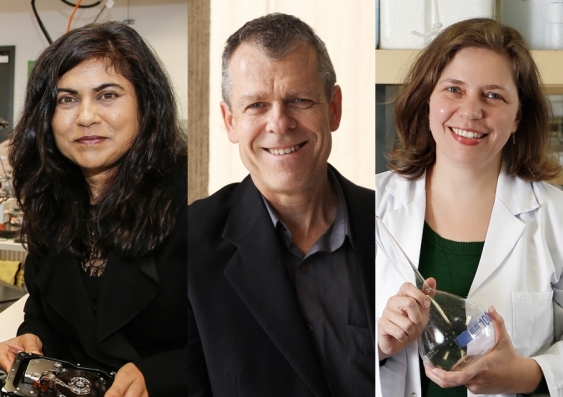 For their outstanding research on psychological responses to trauma, sustainability and recycling, and nanomaterials for medical applications, three UNSW scientists have been honoured with election as Fellows of the Australian Academy of Science.

“These scientists were elected by their Academy peers, following a rigorous evaluation process,” Professor Holmes said.

The new UNSW Fellows are:

Scientia Professor Richard Bryant is the world-leading authority in early psychological responses to trauma. He has identified the core biological and psychological factors that occur immediately after trauma and that influence the long-term trajectories of mental health.

His diagnostic and treatment protocols have been translated into over 15 languages, and are the gold standard protocols used in most countries following traumatic events.

Bryant is the most published and cited clinical psychologist in Australia and he consults widely with international agencies on mental health. He and wrote the major texts on early psychological response to trauma that have set the international research agenda in this field.

Scientia Professor Veena Sahajwalla is an internationally recognised materials scientist, engineer and innovator who is revolutionising recycling science. She is renowned for pioneering the high temperature transformation of waste in the production of a new generation of ‘green materials’.

As Director of the Sustainable Materials Research and Technology Centre (SMaRT@UNSW), she has built a world-class research hub.

Sahajwalla leads a highly innovative research program that fosters innovation and promotes collaboration with industry to ensure that scientific advances in sustainable materials and processes are readily translated into commercially-viable environmental solutions.

She recently launched the world's first e-waste microfactory, which has the potential to reduce the vast amount of electronic waste heading into landfill.

Scientia Professor Martina Stenzel is a world-leading researcher in polymer chemistry and its applications.

She has invented and developed chemical techniques for the synthesis of new and complex polymer architectures and nanomaterials.

Stenzel’s research features both the fundamental chemistry and the applications of these new materials. With an emphasis on biomaterials possessing therapeutic abilities, Stenzel has demonstrated the efficacies of her innovative and smart drug-delivery materials, particularly against cancer.

Also elected as a Fellow is University of Melbourne scientist Professor Lloyd Hollenberg, who is Deputy Director of the ARC Centre of Excellence for Quantum Computation and Communication Technology, CQC2T, based at UNSW.

New Fellows will be admitted into the Academy during a formal ceremony in Canberra today, and will present their work and achievements tomorrow, as part of the three-day-long annual Science at the Shine Dome event.

On Thursday, researchers who were awarded Academy medals last year for their achievements in a range of scientific fields will be presented with their awards. UNSW has five recipients of these honours: Associate Professor Tracy Ainsworth, Dr Zdravko Botev, Dr Alex Sen Gupta and Dr Irina Voineagu of UNSW Science, and Professor Anushka Patel, of UNSW Medicine and The George Institute for Global Health.