Darkness can bring out the worst in us, and the nighttime announcement of a US grand jury decision could have exacerbated the ensuing social unrest, writes Lisa Williams. 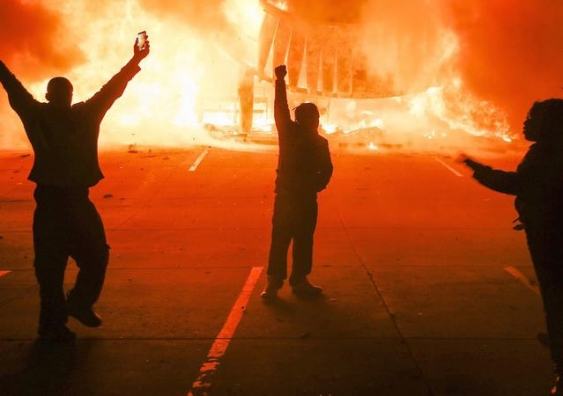 Protesters in Ferguson, Missouri, after the announcement of no charges over a teenager's killing. EPA/Tannen Maury

OPINION: The announcement Monday evening in the US that there would be no charges against a policeman over the shooting of a teenager is puzzling and already the target of  critique.

It’s not just the decision itself  that’s being questioned, but the timing of the announcement. Why in the evening, at 9pm local time? And did the darkness play any role in the   rioting in Ferguson, Missouri, that followed the announcement?

Racially-charged violent protests stretched through the months following the August 2014 shooting of unarmed African-American teenager Michael Brown by white police officer Darren Wilson in Ferguson. In fact, at times a  curfew was put in place – protests were tolerated during the day, but banned at night.

So why the decision for an evening announcement on the grand jury ruling not to indict the police officer over Michael Brown’s death?

Well before the jury’s decision, a plan was apparently in place to give law enforcement   48 hours notice – presumably to prepare. Peaceful protest group  Don’t Shoot Coalition had requested similar advance notice so that they could organise non-violent events.

Any such plans appear to have been abandoned. The jury made their decision midday local time. So, why announce it at 9pm?

The rationale, so it seems, was to allow time for children to get home, for businesses to close and to alert the media to the announcement.

It is unclear why the 48-hour delay wasn’t adhered to – which would have resulted in the decision being announced in the light of day.

The social psychology of darkness

It’s no surprise, yet still deeply sad, that the nighttime announcement of the controversial decision led to violent behaviour. Social psychologists have long known how darkness can serve as a situational cue that quite literally can bring out the worst in us.

Under the cloak of darkness, individuals tend to see themselves less as themselves – that is,   deindividuated. This deindividuated anonymity, in turn, has a host of consequences, including counter-normative and antisocial behaviour.

Direct evidence exists regarding how darkness increases dishonesty. In a laboratory experiment, participants were given a chance to cheat in order to win money for themselves. Participants cheated more when they were in a dimly lit than a brightly lit room.

Darkness also boosts aggressive behaviour. In a study modelled after the classic   Milgram experiments on obedience, individuals were more likely to send presumably painful shocks to a victim in a dark compared to a brightly lit room.

It’s not a far stretch to see how the increased anonymity of darkness facilitated the violent, disinhibited behaviour of the protesters in Ferguson.

Work by social and evolutionary psychologist Mark Schaller suggests that darkness serves as a signal – specifically, a signal of threat. When threatened, we subsequently come to rely more heavily on negative stereotypes about other groups.

Across two studies, Schaller and his colleagues measured participants' “belief in a dangerous world” – the degree to which individuals are inclined to see the world as a dangerous place. They then put those participants in dimly lit or brightly lit rooms and measured negative stereotyping of African Americans.

For participants who typically saw the world as a dangerous place, the dimly lit room exacerbated negative stereotypes of African Americans: that they are dangerous and aggressive. There was no such effect for individuals low in belief in a dangerous world.

Similar effects were observed among Canadian students’ ratings of Iraqis. Dimly lit rooms increased danger-related stereotyping among individuals high in the belief that the world is a dangerous place – suggesting that this is a broad intergroup effect.

Given the racially-charged nature of the original shooting and the ensuing social unrest, such increased stereotyping certainly wouldn’t have helped the situation.

Hindsight in the light

In the case of the announcement of this grand jury decision – an announcement that was   anticipated to prompt a negative reaction in the community – it’s regrettable that it wasn’t made during the daytime.

I don’t mean to suggest that protests would have been avoided or that the protests aren’t driven by valid feelings of injustice. But it’s clear that the nighttime announcement may have exacerbated a situation that was already teetering on the brink of social turmoil.

Dr Lisa Williams is a lecturer in the UNSW School of Psychology.