UNSW-led research has uncovered a battle raging beneath the waves as armies of tiny microbes fight to determine whether exotic marine plants invade new territory and replace native species. 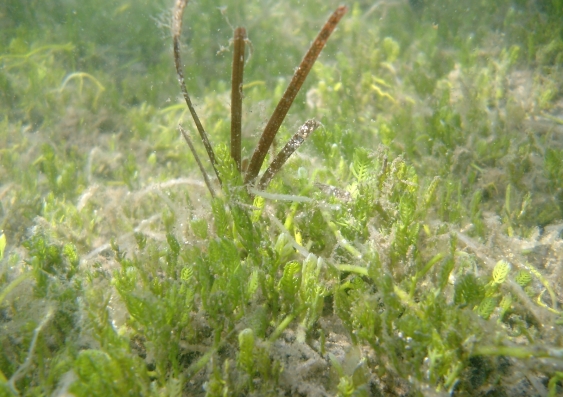 Armies of microbes that are invisible to the naked eye battle it out to determine whether exotic marine plants successfully invade new territory and replace native species, UNSW-led research shows.

The genetic study, which compared microbial communities in sediments associated with an invasive alga and a native seagrass in Sydney, is the first to test the idea that marine microbes play a critical role in the establishment of invasive marine species.

“A battle is being waged below ground that can affect the outcome in this competition between exotic and native species. This has never been shown before in marine ecosystems and will transform how we think about, and manage, marine invasive species.”

The study, by researchers from UNSW, the Sydney Institute of Marine Science, and UTS, Sydney, is published in the journal Scientific Reports.

Microbial communities in marine sediments control ecological processes, affecting the availability of nutrients and the chemistry of the soil.

For the new study, the researchers compared microbial communities living in sediments in a Sydney estuary. They tested sediments associated with a native seagrass, Zostera capricorni, and an alga, Caulerpa taxifolia, which is one of the 100 most invasive species in the world.

The microbial communities differed between the two samples, with the algal sediments having a higher proportion of microbes that produce sulphides, which can be extremely toxic to seagrasses, under low oxygen conditions.

“Our results shed light on why intact, dense beds of seagrass are resistant to colonisation by this alga,” says Associate Professor Gribben.

“However, the balance of the microbes in the soil can be disturbed when seagrass beds start to decline due to other pressures, helping the alga invade new areas.”

C. taxifolia is a fast-growing marine alga that is native to tropical Australia and the South Pacific, but which has colonised various areas outside its natural range.

It was first found in NSW in 2000 and has spread to at least 14 NSW estuaries or lakes, from Lake Macquarie in the north to Wallagoot Lake in the south.

In the same way that gardeners add worms to soils to make them more productive, the researchers are exploring ways to restore the marine sediments and reduce the risk of invasion. This includes adding burrowing organisms to oxygenate sediments and restore healthy, functioning microbial communities.