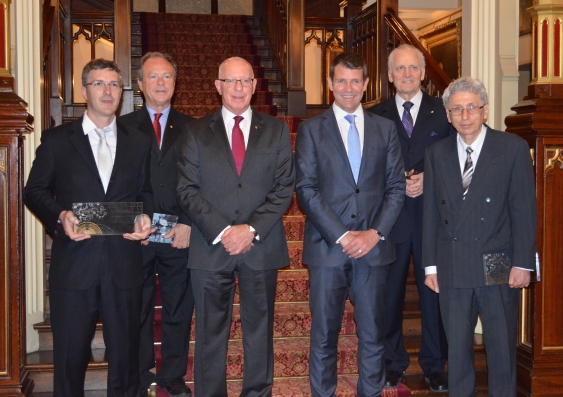 The awards, established in 2008 and newly named the Premier’s Prizes this year, recognise the state’s top researchers and teachers for cutting-edge work that has generated economic, environmental, health, social or technological benefits for NSW.

Mr Baird congratulated the 10 winners and thanked them for their hard work and contribution to the state: “This event allows us to honour and celebrate your research efforts, clever ideas and unwavering dedication to your chosen field."

The NSW Governor, His Excellency General the Honourable David Hurley, welcomed the guests to Government House and said it was an honour to be Patron of the Prizes: “I have immense respect for individuals who devote their lives to solving society’s toughest problems. The men and women we are celebrating here tonight – scientists, engineers and teachers – are perfect examples.”

Professor Victor Flambaum of the School of the Physics won the award for Excellence in Mathematics, Earth Sciences, Chemistry and Physics. He tackles some of the most challenging theoretical problems in particle physics, astrophysics and general relativity. And his research has led to fresh directions in the search for variations in the fundamental constants of nature and the development of super-precise ionic and nuclear clocks needed for next-generation GPS and autopilot systems.

Scientia Professor George Paxinos of Neuroscience Research Australia won the award for Excellence in Biological Sciences (cell and molecular, medical veterinary and genetics). He is the author of more than 45 books on the structure of the brain and spinal cord of humans and experimental animals, and his 3D brain maps have allowed neuroscientists and surgeons to better understand brain illnesses such as Parkinson’s and Alzheimer’s. His first atlas published in 1982, The Rat Brain in Stereotaxic Coordinates, is among the most cited scientific texts ever published.

Scientia Professor Mark Bradford of the School of Civil and Environmental Engineering won the award for Excellence in Engineering and Information and Communications Technology. As founding director of UNSW’s Centre for Infrastructure Engineering and Safety, he has been proactive in translating university research into industry practice, especially through design standards and textbooks. His latest research is on innovative deconstructable steel-concrete composite frame systems to minimise environmental damage when buildings are demolished and to maximise reuse of their structural components.

Professor Christoph Arns of the School of Petroleum Engineering won the award for Leadership in Innovation in NSW. His revolutionary technique for high resolution 3D scanning of rocks to identify their physical properties has benefited oil and gas exploration. He is a key inventor of the intellectual property that underpinned UNSW and ANU’s spin-off company Digitalcore and which was eventually sold to US company FEI in 2014 for $76 million.

Nuclear clock may keep time with the Universe

Reaching for the stars