Torch partnership to produce next generation of touchscreens

New types of touchscreens that would be very robust but also sensitive enough to detect ten fingers at once are to be developed in a research partnership between UNSW Science and Chinese company WeTouch. 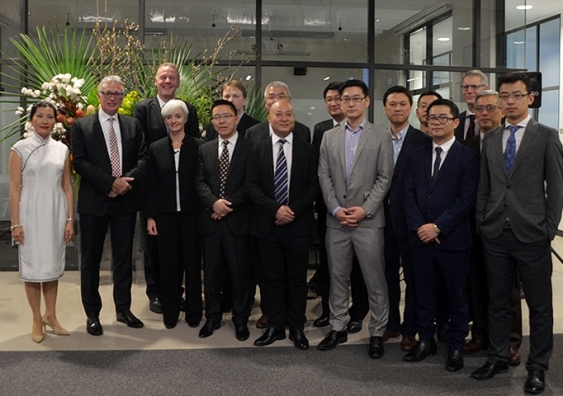 New types of touchscreens that would be very robust but also sensitive enough to detect ten fingers at once are to be developed in a research partnership between UNSW Science and Chinese company WeTouch.

The collaboration, celebrated at a special launch event at UNSW, is part of the Torch innovation partnership between UNSW and China, announced last year.

WeTouch, which is based in Sichuan Province, has grown rapidly since it was founded in 2011 by major shareholder Guangde Cai. It now employs more than 300 people in China producing medium to large-scale touchscreens for a variety of industries, including retail, finance, gaming, health and the automotive industry.

The UNSW project with WeTouch to develop new piezoelectric-based screens that overcome the drawbacks of current screen technologies is led by Dr Danyang Wang, Dr Dewei Chu and Professor Sean Li of the UNSW School of Materials Science and Engineering.

UNSW Dean of Science Professor Emma Johnston said she was proud the Faculty’s scientists were taking leading roles in Torch projects, including the first one announced last year – a project to develop new graphene-based cable technology that could cut power costs and greenhouse gas emission by improving electricity transmission.

“Development of touchscreens is a massively expanding industry,” Professor Johnston said. “So, it is no understatement that this project to develop new touchscreens that are highly sensitive, accurate, low cost and made from readily available technologies could have a global impact.

“It represents a great opportunity for the company, for Australia and for China.”

In April 2016, in the Great Hall of the People in Beijing before Australian Prime Minister Turnbull and Chinese Premier Li, UNSW signed contracts to host the first-ever Torch science and technology park outside China.

UNSW Deputy Vice-Chancellor (Enterprise) Professor Brian Boyle said that the Torch initiative was visionary, and more than 20 programs of cutting-edge research have now been established with industry partners, delivering research contracts worth more than $70 million to UNSW.

“Our relationship with WeTouch represents the pinnacle of that approach,” Professor Boyle said at the launch on 22 June, which was attended by Mr Cai and other company representatives from China.

First generation touchscreens use a resistive technology which relies on pressure on flexible layers of material. This approach is robust but energy expensive, single-touch and subject to rapid ageing.

Most of WeTouch’s screens rely on capacitive sensing, where touch is detected by a change in the capacitance when a conducting object like a finger is placed on the screen. This approach allows for multi-touch capability and is energy efficient, but can be inaccurate.

Chairman of WeTouch Australia Dr Peter French said the new technology using piezoelectric materials was aimed at delivering a robust yet precise, multi-touch screen, with the added benefit that “typing with all ten fingers is possible”.

“As chairman of WeTouch Australia, I am very pleased to be part of this very exciting program of research that can showcase Australian innovation generally and that of UNSW in particular . . . to enhance and improve all our lives,” he said.

WeTouch’s customers include Siemens, Schneider Electric and Canon. The company will list on the Australian Stock Exchange at the end of July.