A UNSW spider researcher is hoping to learn a lot more about the world’s most venomous spider. 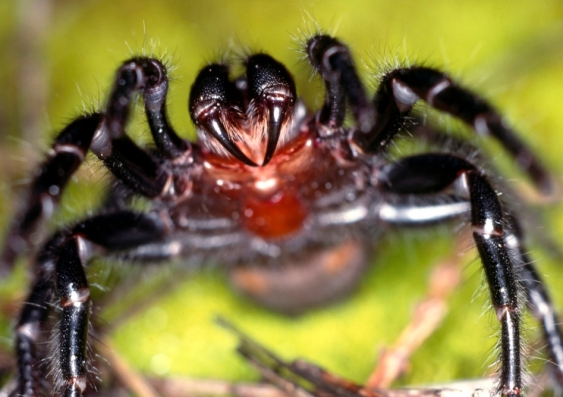 According to the Australian Museum, the male Sydney Funnel-web spider is probably responsible for 13 recorded deaths and many medically serious bites. Photo: Shutterstock.

Sometime this summer, Caitlin Creak will be tacking tiny tracking systems slightly larger than a rice grain to the heads of eight male Sydney Funnel-web spiders (Atrax robustus) to see where they wander at night.

“Because this is a dangerous species, I do gas them first,” Ms Creak, a PhD candidate in UNSW Sciences' School of Biological, Earth and Environmental Sciences, says.

“I use carbon dioxide to knock them out, then while they are asleep or groggy, I will gently pin their legs down with a piece of sponge shaped like a doughnut, then position their cephalothorax (the ‘head’) in the hole of the sponge and use a small amount of super glue to attach the tracker to his head.”

The sponge will then be removed from the fully awake “and rather unimpressed spider”, who recovers while the glue cures, before being released into the wild the next day.

“I have learnt so far that our males are visiting multiple burrows per season, the females are mating multiple times, and that the boys in Lane Cove National Park don’t need to go far to find a mate,” Ms Creak says.

“Great news for them, and us.” 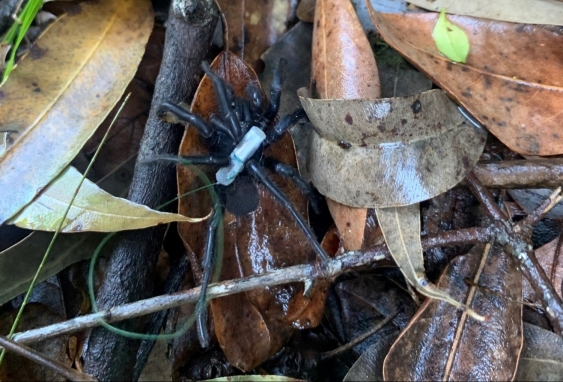 One of Caitlin Creak's Sydney Funnel-web spiders with a tracking system attached to its head. Photo: Caitlin Creak.

Ms Creak’s project will hopefully inform how far mature Sydney Funnel-web spiders will travel in a season, and if weather and environmental conditions impact their movement.

“This will help us to predict big or small Sydney Funnel-web spider seasons and therefore human exposure to them,” she says.

“This remarkable spider has become a part of Sydney’s folklore and, although no deaths have been recorded since the introduction of an antivenom in 1981, it remains an icon of fear and fascination for Sydneysiders,” the Australian Museum states.

During Ms Creak’s tracking project, the spiders’ whereabouts are monitored using the tiny telemetry tracking devices, a receiver and antenna.

The telemetry tracking uses radio frequency to relay beeps as the researcher gets closer to the spider.

She will then use a tape measure to record the distance the spider travelled overnight, as well as marking their location each day with GPS coordinates.

Although it sounds easy, it’s a challenging practice.

The resolution of the trackers means the spider can only be detected in an area of about one to two metres squared, and then the researcher needs to find a three-centimetre spider amongst two square metres of leaf litter, rocks and logs.

“Funnel-webs also have zero concern about accessibility, so there is often a lot of bush-bashing and steep areas we have to navigate,” she says.

“On average, to find all eight spiders and measure their distance, my morning of fieldwork could take four to six hours.”

Ms Creak says she wants to “learn everything about spiders” but is particularly interested in their behaviour and ecology. During her PhD, she will be investigating their movement, diet, burrow dynamics and courtship.

She says there are a lot of gaps in knowledge about the Sydney Funnel-web, which is believed to be found in a 100 kilometre radius of Sydney.

For example, scientists don’t really know what they eat or what age they live to, although they believe it takes five to seven years for a male Sydney Funnel-web to reach sexual maturity.

“At which stage he will leave his burrow for good, wander, mate as many times as possible over a single summer season, and then die.”

Females are believed to live to approximately 20 years old, but there is also no peer reviewed research to support this theory.

But what researchers do know is that Sydney Funnel-web spiders build their burrows in bushy habitats, or in the ground, and usually against a rock or a tree root, and Ms Creak has noticed they tend to be more numerous in areas near water.

“Where there is one funnel web there are more,” Ms Creak says. “I have never seen territorial behaviour from either sex and have even heard of females building burrows butted up against each other."

The Sydney Funnel-web spiders start appearing in early November through to late April.

“The peak of this season normally sits around February-March, but this all depends on the weather. They like it warm and humid.”

This species is nocturnal, so both males and females are more active at night.

“But it is only the sexually mature males that will leave their burrow permanently, and as they wander looking for females, they will camp during the day, either in a females burrow, or in a sheltered spot where they can make a thin silky cocoon to sleep in,” the PhD candidate says.

“This is where people tend to have run-ins with them, as the males look for shelter, whether that be a log, or a pile of sheets, or bark and leaves, or someone's shoes they have left outside.”

But Ms Creak has never been bitten.

“I am very cautious with them. I never handle them with my hands, ever: I always use 30-centimetre long forceps and thick plastic containers when interacting with them,” she says.

“The only reason any spider is going to bite is that it is hunting, or it is trying to defend itself.

“I would be willing to bet that all cases in which a human has been bitten by a Funnel-web spider, the spider was defending itself.”

The problem with mature male Funnel-webs, she says, “is that they have unusually human lethal venom”.

“We are trying to figure out why this is so: current research suggests this is just an odd evolutionary coincidence.”

Ms Creak says once it is peak season for Sydney Funnel-web spiders, she will have more than 10 sexually mature males in her collection.

Last season she had 15 spiders - eight of those were tracked.

“I go out every night and essentially just walk the tracks in Lane Cove looking for males and collecting whoever I see,” she says.

“It’s super easy to tell the males because one, they’re out and wandering looking for females - the females are far more likely to stay in or near their burrows.

“The mature males are also morphologically different. You can see their palpal bulb on the end of their pedipalps, which is essentially their mating organs.”

Volunteers (“they are such a vital part of my research - they essentially halve the time it takes to locate the tracked spider”) named last season’s spiders.

“I had Harold and Steve, who I got the most amount of data from; Fabio Funnel-web was by far my biggest boy; and Michael-Omorph (a pun on the infra order these spiders are in, Mygalomorphs) travelled the longest one night distance at more than 60 metres,” she says.

“I also had Leg-olas, Bartholemew, Quincy, Cricket, Tippy-tappy and Aragog.”

She says spiders have incredible behaviours that are a joy to watch and she’s learnt a few quirks about them along the way.

“Spiders can display an incredible amount of plasticity (ability to change within one’s lifetime) within species and between individuals,” she says.

“Their behaviours can vary between individuals as can their morphology (body shape), despite being the same species from similar habitats.

“What I love is that despite this plasticity, they still have these incredible innate responses to certain stimuli.

“For example it doesn't matter if the spider has only ever been given one type of food, give it something new and they will work it out, most of the time. Their predatory skills are just so cool to watch.” 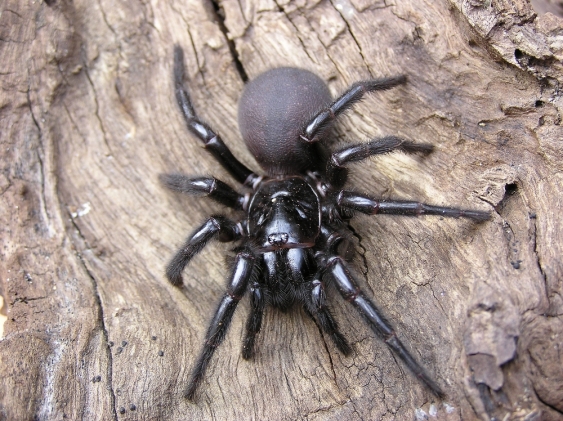 Another peculiarity is that female spiders have a specialised organ where they can store sperm and will eject it if they didn't like their mate.

She’s also been surprised to discover in her personal research that female Sydney Funnel-web spiders let males into their burrows, and sometimes let them stay in there overnight and even multiple nights.

“Given there's a common misconception that female spiders eat their partners this was great to see in real life, because I would then get to track my boys out of one burrow and into the next,” she says.

“They really were just trying to spread their seed.”

The PhD candidate was always around spiders, having grown up in a house which backed onto a strip of bushland.

“As a child and through school I have always had respect for spiders. I have never been one to kill on sight, I would always just relocate them if necessary,” she says.

“However, it wasn't until I was at university that I truly fell in love with them. I was enrolled in a biology degree with the aim of moving into veterinary science, until I did a second-year invertebrate biology course where we learnt and interacted with a great deal of wonderful creatures, but spiders just stood out to me.

“They were misunderstood, people reacted to them in interesting ways, and I couldn't help myself.”

She stresses that spiders are very important for the ecosystem.

“Can you imagine how overrun we would be with flies, cockroaches, gnats and all sorts if there wasn't an equally as prolific predator to control those numbers?” she says.

“Spiders are what we would call meso-predators, predators that are also predated upon themselves and so, sit somewhat in the middle of the food chain.

“The mind-blowing diversity of spider species means that they can successfully live nearly anywhere on earth.

“For example, the humble wolf-spiders are active hunters and tend to be capable of living anywhere, compared with some of our beautifully coloured crab spiders, who have evolved all sorts of beautiful colours, so they can sit in the middle of flowers to catch unsuspecting bees or flies.”

This is why she encourages people to either leave or relocate Sydney Funnel-webs to a safe area.

“The Australian Reptile Park is always in need of Funnel-webs for making antivenom, so catch the spider using a glass jar with a wet cotton ball or piece of paper towel in it, seal the jar very well and drop it to your local drop off point, such as a hospital,” she says.

“I get this question all the time: 'what if it jumps on you?' They physically can’t jump. Also, they are a beautiful animal. Sydney is lucky to have such a wonderful creature.”