UNSW solar cell researchers have broken yet another world record, squeezing even more electricity from a beam of sunlight. 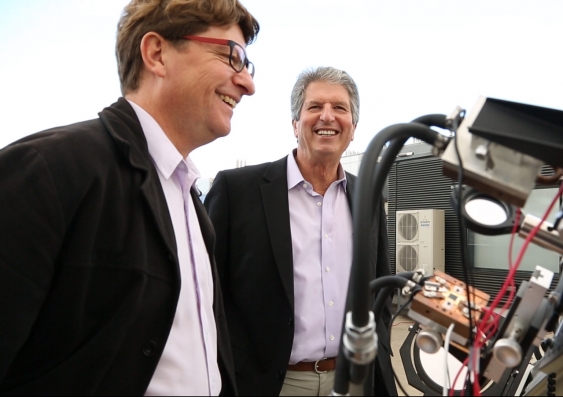 Using a clever combination of cells embedded in a prism, UNSW engineers have dramatically lifted the efficiency of photovoltaics, setting a world record for sunlight-to-electricity conversion.

The record was set by Dr Mark Keevers and Professor Martin Green at the Australian Centre for Advanced Photovoltaics (ACAP), using a prism configuration that extracts the maximum possible energy from sunlight.

It does this by splitting the incoming rays into four bands, using a hybrid four-junction receiver to squeeze more electricity than ever before from each beam of sunlight.

The UNSW module converts 34.5% of received solar energy into electricity. The result, confirmed by the US National Renewable Energy Laboratory, is almost 44% better than the previous record, set by Atla Devices of the US. This reached 24% efficiency, but over a larger surface area of 800 square centimetres. The UNSW module is 28 square centimetres.

“This encouraging result shows there are still advances to come in photovoltaics research to make solar cells even more efficient,” says Keevers, a Senior Research Fellow. “Extracting more energy from every beam of sunlight is critical to reducing the cost of electricity generated by solar cells as it lowers the investment needed, delivering payback faster.”

The result was obtained by the same team that set a world record in 2014, achieving an electricity conversion rate of more than 40%, but using mirrors to concentrate the light. The new result, however, was achieved using normal sunlight with no concentrators. 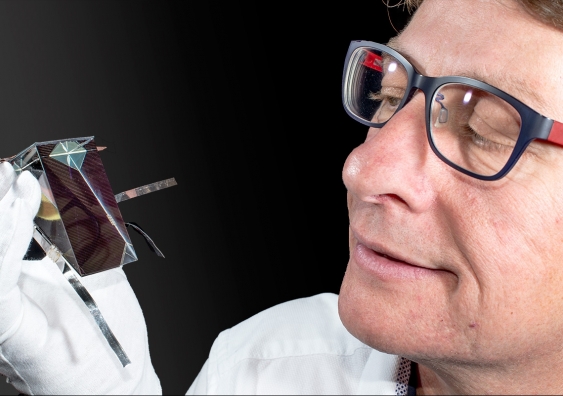 “What’s remarkable is this level of efficiency had not been expected for many years,” says Green, director of the ACAP and a pioneer in solar research for 40 years.

“Things are moving faster in solar cell efficiency than many experts expected, and that’s good news for solar energy.”

Australia’s research in photovoltaics has already generated flow-on benefits of more than $8 billion to the country, Green says. Gains in efficiency alone, made possible by UNSW’s PERC cells, are forecast to save $750 million in domestic electricity generation in the next decade. PERC cells were invented at UNSW and are now becoming the commercial standard globally.

The record-setting UNSW mini-module combines a single-junction silicon cell on one face of a glass prism, with a triple-junction solar cell on the other.

Things are moving faster in solar cell efficiency than many experts expected, and that's good news for solar energy.

Some of the infrared band of incoming sunlight, unused by the triple-junction cell, is filtered out and bounced onto the silicon cell, thereby extracting just about all of the energy from each beam of sunlight hitting the mini-module.

The spectrum-splitting, multi-junction approach is perfect for solar towers, like those being developed by Australia’s RayGen Resources. However, solar cells of this type are unlikely to find their way onto rooftops soon due to high manufacturing cost and complexity – a problem the UNSW team is working on.

The research is supported by $1.4 million grant funding from the Australian Renewable Energy Agency. Other research partners include RayGen, Trina Solar, a PV module manufacturer, and the US National Renewable Energy Laboratory.

The conversion milestone came as UNSW registered another world record, this time in thin-film solar cells used in façades, roofs and windows.

In April, UNSW’s Dr Xiaojing Hao achieved the world’s highest efficiency rating, recording 7.6% efficiency in a one square cm area. The rating was achieved using a new type of thin-film cell called CZTS, made from abundant materials such as copper, zinc, tin and sulphur, which have none of the toxicity problems of rival technologies.

“This is the first step on CZTS’s road to beyond 20% efficiency, and marks a milestone in its journey from the lab to commercial product,” says Hao, who was named last year as one of UNSW’s 20 rising stars. “There is still a lot of work needed to catch up with [rival technologies], in both efficiency and cell size, but we are well on the way,” she says.