An independent group of leading Australian scientists, economists and business people including a UNSW academic have released their investigation into whether water reforms have resulted in the flows needed to improve river health. 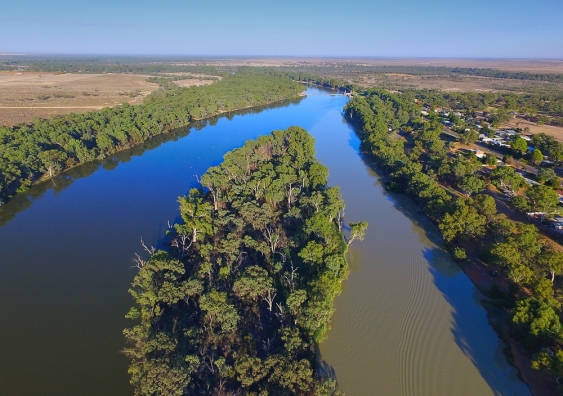 The report by eminent river scientists measured how much water actually flowed past 27 river gauges across the Basin. Photo: Shutterstock

The Wentworth Group of Concerned Scientists have published a report that shows 20 per cent of river water, expected under the Basin Plan, did not flow in the rivers of the Murray-Darling Basin between 2012 and 2019.

The report examined the observed versus expected flows under the Basin Plan 2012-2019.

“The news is not good,” says UNSW Professor and member of the Wentworth Group of Concerned Scientists, Richard Kingsford.

“This water would have supplied communities down the river, including traditional owners, during the droughts as well as some of the internationally recognised wetlands that we have been working on such as the Macquarie Marshes, Narran Lakes and the Coorong.”

The report by eminent river scientists measured how much water actually flowed past 27 river gauges across the Basin compared to how much was expected to flow at these gauges, under Basin Plan modelling since 2012.

“We took account of the climate and amount of water held in dams and then assessed each river in the Murray-Darling Basin, which showed that delivery in the River Murray at the South Australian border was down by more than 1,200 billion litres while there was 230 billion litres less water in the Darling River every year than expected,” Prof. Kingsford said.

The researchers estimate the cost to taxpayers for this missing water to be between $700 million and $1.8 billion, based on the Productivity Commission estimates of $2,160/ML (million litres) for water buybacks and $5,776/ML for infrastructure modernisation.

The shortfall for the Darling River coincided with the mass fish kills at Menindee Lakes in the summer of 2018/19 and the decision by the Commonwealth Government in 2017 to reduce water recovered for the environment by 70 billion litres from the Darling River and its tributaries.

“As a member of the Academy of Science review panel investigating this problem, we identified decreasing flows from over-allocation and floodplain harvesting upstream as well as climate change as the underlying cause of the fish kills, and having less water in the system just exacerbated the problem,” Prof. Kingsford says.

“The health of Ramsar wetlands of international importance are dependent on river flows. If the current Basin Plan settings are not delivering the expected increases in flows, more water recovery is needed to maintain the health of these significant sites with their red gum forests, waterbird, fish and frog breeding areas.”

There have been no major river health monitoring programs since 2012, when Basin states withdrew funding for the Sustainable Rivers Audit. The Commonwealth body responsible for national oversight on water reform was disbanded in 2014.

“There is a major gap in independent reporting on government expenditure and what river water is being delivered to progress towards the river health objectives listed in the Water Act and Basin Plan,” Prof. Kingsford says.

The Wentworth Group thinks there are a few main reasons contributing to these shortfalls.

“Environmental water is not completely protected. The 2012 changes to the Barwon-Darling Water Sharing Plan have reduced the protection of low flows, allowing some environmental water to be lawfully extracted for irrigation and reducing the volume of water remaining in the system,” Prof. Kingsford says.

“Water may also have been illegally extracted as shown by recent prosecutions and ongoing investigations by the NSW Natural Resource Access Regulator. It is also possible that several very dry years since the Basin Plan was legislated have meant higher than expected volumes of water may have evaporated or seeped into the channel. In the very dry 2018/19 year, the amount of evaporation and seepage was higher than 75% of years on record in the River Murray.”

Finally, the scientists say that while the Commonwealth has recovered 2,100 billion litres of water entitlements on paper, it is possible that not as much water has been available to the environment as was expected under these entitlements.

“In particular, estimates of the long-term expected yield of water bought back for the environment – amount of water expected to be delivered – by environmental water holder portfolios may overestimate real-world yield. For example, the Commonwealth Environmental Water Holder’s operations show that water allocated to the environment has been 30 per cent less than expected in an average year.”

Prof. Kingsford says analyses and reporting using multiple lines of evidence are required, including the government's hydrological modelling platforms, to properly investigate the water deficit and to develop policy responses to rectify shortfalls.

“The Basin Plan will only be effective if it delivers measurable additional water into the river systems to improve ecosystem health. The $13 billion public expense to once and for all address water over-allocation and secure the long-term health of the Murray-Darling Basin is failing to protect river flows and deliver all the water promised for the environment."