Seaweed-eating fish are becoming increasingly voracious as the ocean warms due to climate change and are responsible for the recent destruction of kelp forests off the NSW north coast. 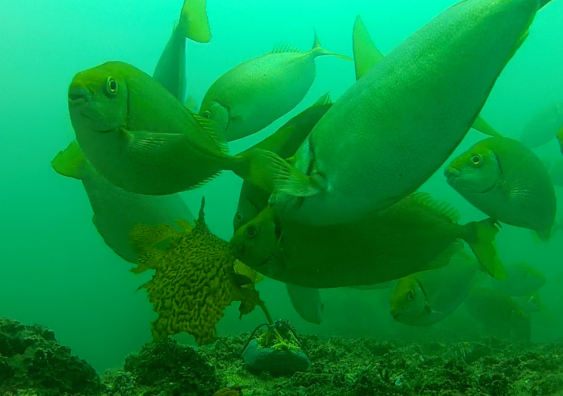 Rabbitfish in a feeding frenzy on some transplanted kelp. Photo: Adriana Verges

Seaweed-eating fish are becoming increasingly voracious as the ocean warms due to climate change and are responsible for the recent destruction of kelp forests off the NSW north coast near Coffs Harbour, research shows.

The study includes an analysis of underwater video covering a 10-year-period between 2002 and 2012 during which the water warmed by 0.6 degrees.

“As a result of climate change, warm-water fish species are shifting their range and invading temperate areas. Our results show that over-grazing by these fish can have a profound impact, leading to kelp deforestation and barren reefs.

Frenzied feeding on transplanted kelp by a school of rabbitfish is only briefly interrupted by a large predator in the Solitary Islands, eastern Australia.

“This is the first study demonstrating that the effects of warming in kelp forests are two-fold: higher temperatures not only have a direct impact on seaweeds, they also have an indirect impact by increasing the appetite of fish consumers, which can devour these seaweeds to the point of completely denuding the ocean floor.

“Increases in the number of plant-eating fish because of warming poses a significant threat to kelp-dependent ecosystems both in Australia and around the globe,” she says.

The study is published in the journal Proceedings of the National Academy of Sciences.

The team recorded underwater video around August each year at 12 sites along a 25 kilometre stretch of coast adjacent to the Solitary Island Marine Park off northern NSW.

During this period, kelp disappeared completely from all study sites where it was initially present. At the same time the proportion of tropical and sub-tropical seaweed-eating fish swimming in these areas more than tripled. Grazing also intensified, with the proportion of kelp with obvious feeding marks on it increasing by a factor of seven during the decade. 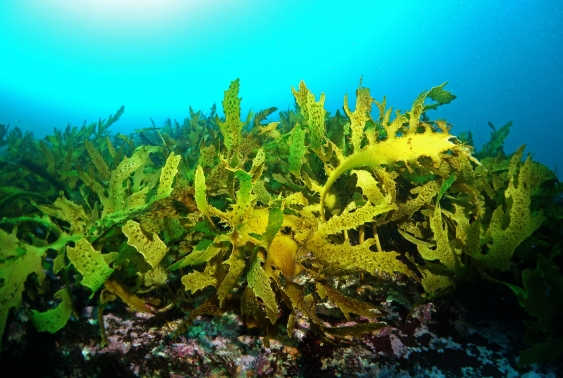 “We also carried out an experiment where we transplanted kelp onto the sea floor. We found that two warm-water species – rabbitfish and drummer fish – were the most voracious, eating fronds within hours at an average rate of 300 bites per hour,” says Dr Vergés.

“The number of fish that consumed the smaller algae growing on rock surfaces also increased, and they cleared the algae faster when there was no kelp present. This suggests the fish may help prevent kelp regrowing as well, by removing the tiny new plants.”

In Australia, kelp forests support a range of commercial fisheries, tourism ventures, and recreation activities worth more than $10 billion per year.

“The decline of kelp in temperate areas could have major economic and management impacts,” says Dr Vergés.

The video footage used in the study from 2002 onwards was originally collected for a very different research project – to measure fish populations inside and outside sanctuary zones in a marine park. But the team realised it could also be used to determine whether kelp was present in the background or not.

This unplanned use of an historic dataset is a good example of the value of collecting long-term data in the field, especially if it includes video or photos for permanent records.

The team behind the study includes UNSW Professor Peter Steinberg, director of the Sydney Institute of Marine Science (SIMS); Dr Ezequiel Marzinelli and Dr Alexandra Campbell, also from UNSW and SIMS; Dr Christopher Doropoulos from CSIRO; and other researchers from the University of Queensland, the University of Sydney, the NSW Department of Primary Industries, James Cook University, Centre for Advanced Studies in Blanes Spain, and Nanyang Technical University in Singapore.