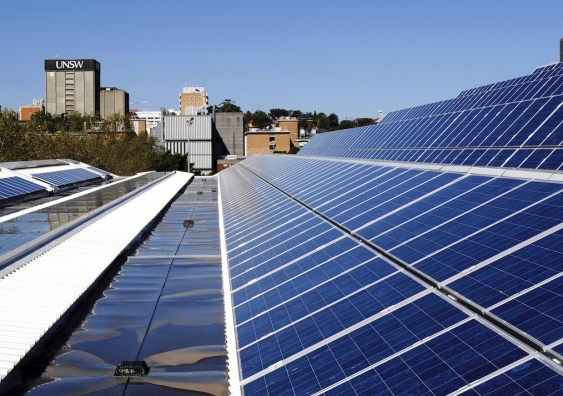 The researchers from UNSW Engineering will receive more than $7 million for six projects in the areas of advanced silicon, tandem silicon and end of life. This is the first time ARENA has sought applications addressing solutions to end-of-life solar PV issues.

“A key part of the funding round was finding a solution to the end-of-life of solar panels and we’re excited to see some interesting new research into this,” said ARENA CEO Darren Miller. “It’s an important part in our transition to renewable energy as we need to ensure that materials used in solar panels can be recycled or remanufactured in solar panels or in other high value applications.”

“Our talented researchers continue to lead in this area,” Professor Fisk said. “As global demand for renewable energy ramps up, the efforts of UNSW engineers will have a major impact on the nation’s R&D capability over the whole lifecycle of solar PV.”

Scientia Professor Martin Green, School of Photovoltaic and Renewable Energy Engineering, is lead Chief Investigator (CI) on the ‘Reduced solar module temperature’ project which has received a $1,767,730 R&D grant from ARENA. The project aims to develop cost-effective approaches to reducing photovoltaic module temperature rise when modules operate in the field. This will help in achieving the broader aim of having improved technology taken up by module manufacturers as rapidly and as widely as possible to quickly further reduce the cost of photovoltaic energy and accelerate its uptake.

Professor CheeMun Chong, School of Photovoltaic and Renewable Energy Engineering, is lead CI on the ‘End-of-life closed loop recycling and remanufacturing end-of-life silicon photovoltaic modules: towards a circular economy’ project which has received a $1,560,000 R&D grant from ARENA. The project will develop the first economically viable technologies to recycle solar modules and reuse recycled materials to remanufacture ‘new’ PV modules.

ARC Future Fellow Associate Professor Yansong Shen, School of Chemical Engineering, is the lead CI on the ‘A highly efficient, low-cost and eco-friendly recycling technology for silicon photovoltaics’ project which has received a $1,360,000 R&D grant from ARENA. In this project, inspired by metallurgy engineering, the team aims to develop a demonstrable and highly efficient low-cost and sustainable recycling technology for End-of-Life photovoltaic solar panels with respect to the entire supply chain.

Associate Professor Ziv Hameiri, School of Photovoltaic and Renewable Energy Engineering, is the lead CI on the ‘Lower PV cost by a combination of luminesces images and machine-learning’ project which has received a $694,224 R&D grant from ARENA. The project aims to remove major roadblocks towards achieving cost-effective silicon solar cells with higher efficiency and stability.

The project’s other UNSW CIs are: Professor Thorsten Trupke and Professor Sowmya Arcot.