UNSW Canberra will host a new facility in partnership with the French Space Agency CNES, bringing together the right people in the same place to design a space mission. 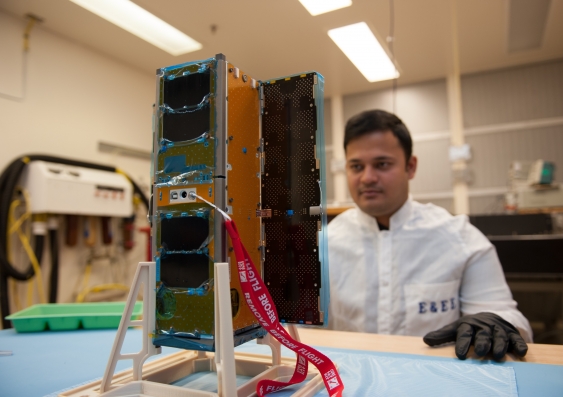 “Thanks to our partnership with CNES, UNSW Canberra will host Australia’s first Concurrent Design Facility by the end of the year,” said Professor Michael Frater, Rector of UNSW Canberra.

“We partnered with CNES to incorporate their software and training within this facility. Having this top-level agreement means that UNSW Canberra is highly regarded internationally, and will see us leading Australia’s space economy,” he said.

Worldwide collaborations between CNES, NASA, the European Space Agency, the Indian Space Research Organisation and JAXA to fly bilateral space missions already occur frequently, with private companies and entrepreneurs such as Elon Musk getting in on the action. The UNSW Canberra and CNES partnership now allows Australia to engage on the world stage for the first time.

Professor Russell Boyce, Director of UNSW Canberra Space, said the facility provided the infrastructure to capture the critical design elements of a space mission. The CNES software and training would link these elements into an engineering model of the entire system.

“At its heart, this partnership is all about bringing together the right people in the same place to design a space mission,” he said. “The world-class CNES software enables us to go toe- to-toe with other agencies.”

The President of CNES, Dr Jean-Yves Le Gall, said: “The CNES Space Mission concurrent design facility, the Centre d’Ingénierie Concourante, or CIC, is a powerful tool for our agency to build meaningful collaborations in space programs. We are very happy to support UNSW Canberra and Australia establish this capability to help them grow their space ambitions.”

UNSW Canberra and the ACT Government are jointly funding the space mission design facility. ACT Chief Minister Andrew Barr said: “The ACT Government is delighted to part fund this initiative to create a ‘space ecosystem’ in Canberra that delivers economic benefits to the ACT and the nation.”

“This MoU builds on the MoU that we signed at the International Astronautical Congress on Monday to collaborate with the South Australian and NT Governments to grow the space industry in Australia,” he said.

The Australian and French governments also signed a joint statement in March this year, in which they both expressed their intention to cooperate more closely in the radio astronomy and space science sectors, building on existing collaboration in relation to exploitation of satellite navigation technologies and satellite imagery for economic and environmental benefit.

Professor Boyce said this would provide a boost to economic growth and jobs.

“A solid network of people with skills and experience in developing, procuring and managing missions has not previously existed in Australia," he said.

"The space mission design facility will now enable spacecraft design engineers, scientists, and planners from industry, agencies and the research sector to connect across the ACT, Australia, and globally. They’ll have the means to rapidly design and determine the technical and economic viability of proposed space missions, while building the Australian space economy.”

For example, he said, “if a new game-changing spacecraft propulsion technology was invented in Australia, we would now be able to quickly showcase its benefits by demonstrating how it could be folded into the overall mission design at an early stage. This process greatly accelerates the new technology, innovation, design and deployment virtuous circle.”

Discussions are already underway for a joint French/Australian satellite mission.