UNSW Sydney and Hangzhou ­Cables formalised a new agreement during the University's Torch Innovation Week, a showcase of Australian and Chinese partnerships. 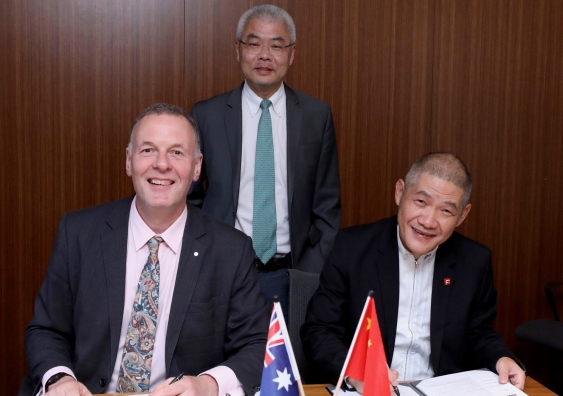 Large-scale manufacturing of next-generation graphene power cables, which promise to cut electricity costs and improve grid transmission, will be rolled out under the second phase of a major collaboration between UNSW Sydney and Hangzhou ­Cables.

The agreement, which will move the project into the second stage of development, was formalised last night at a ceremony to mark UNSW’s Torch Innovation Week, a showcase of Australian and Chinese partnerships.

The joint venture between UNSW Sydney and Hangzhou ­Cables received an additional $3 million funding boost that will transfer laboratory research results into the industrial production of a graphene cable pilot line located in Hangzhou.

An initial 10-metre prototype of the cable technology, developed at the Kensington campus over the past two years, showed that graphene, a form of carbon, can be used to stop electricity leakage that happens with conventional power cable and grids, which could deliver significant savings in electricity and emissions.

The technology was invented by a UNSW research team led by materials scientist Professor Sean Li.

The project is a flagship collaboration of the Torch Innovation Precinct at UNSW – an unprecedented partnership between UNSW-led research teams and Chinese businesses and industries with the capital and market access needed to translate Australian research into high-impact new products, processes and services.

The successful commercialisation and application of the UNSW technology could save about 275 terawatt hours of power a year across China alone – equivalent to Australia’s entire annual energy consumption.

Professor Brian Boyle, UNSW Deputy Vice-Chancellor, Enterprise, announced that according to the test results of the National Measurement Institute (NMI), graphene-copper composite wire developed in phase one of the project reduced resistivity by 3.8%, compared with that of the copper wire within the same area.

"The technology transfers the low-cost raw materials, such as graphite, into graphene which forms copper/graphene composite conductors. This not only increases the electrical conductivity but also reduces the use of copper which means it more economical and efficient."

He said the successful commercialisation and application of the UNSW technology could save about 275 terawatt hours of power a year across China alone – equivalent to Australia’s entire annual energy consumption.

The Hangzhou ­Cables project was the first to be unveiled as part of the Torch Precinct in 2016.

"Signing the second phase of this project demonstrates the economic and sustainable impacts our research efforts and global achievements with HCCL in Hangzhou are making," said Professor Boyle.

"This is an example of outstanding and highly relevant research crossing international borders. By accelerating our research efforts in Sydney and scaling them up through HCCL in China and then out to other international markets, we've established a model for many more Australian-Chinese collaborations that will have a global impact."

More projects in the wind

Other collaborative projects were also signed at the Torch Innovation Week event.

One of the Torch Precinct’s foundation partners, Kohodo, also signed a new agreement with UNSW to develop hydrogen fuel cells, valued at $3 million over the next three years. Hydrogen fuel cells are an alternative fuel source that produce zero emissions.

The UNSW Torch-Kohodo joint hydrogen laboratories will open in Shenzhen on 16 November and a sister lab will open at UNSW Sydney soon after.

"They fall in different areas of UNSW’s research portfolio, but all contribute to innovative energy technology leading towards a cleaner and greener future."

Torch partnership to produce next generation of touchscreens