UNSW’s team of student engineers and soccer playing robots is heading to China to defend their World Championship title at RoboCup 2015. 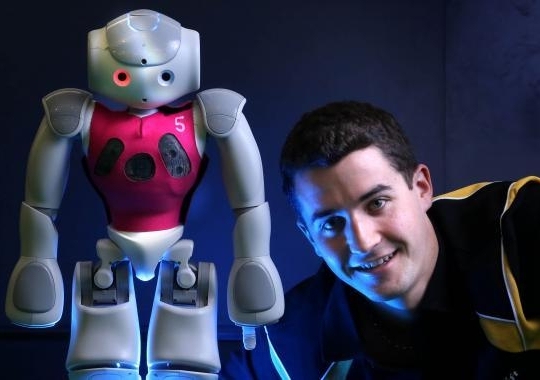 Sean Harris with one of the team. Image: Grant Turner

A team of UNSW students, engineers and soccer playing robots is heading to Hefei, China, for Robocup 2015, held from 17-22 July. The team will be defending their 2014 World Championship title in the Standard Platform League.

Team leader Sean Harris is a PhD student with UNSW’s School of Computer Science and Engineering. He become involved with the group in 2011 and took the reigns in 2014. UNSW Engineering spoke to Sean in the lead-up to Robocup 2015:

Why did you get involved in this student-led program?

It's fun! It's exciting! I enjoy sport a lot, as well as computing, so this is a great mix of both sport and robotics. But it's also a difficult challenge. It's hard to play soccer so well in such a challenging environment and I think that really motivates people; solving really hard problems like that.

Congratulations on your world championship title for RoboCup SPL 2014. Why do you think you were so successful last year?

We had a really big drive in the team and we implemented a whole bunch of new systems, some of which we'd never used before. We had a plan right from the start and we stuck to it. The team put in a lot of hours and a lot of work to get there. In the end, everything went as we planned it, so I think that was a big factor in our success.

Last year you were up against Germany. Do you think they will be the main competition this year?

Yes, probably. There are actually two strong German teams. The team we played in the semi-final last year is the stronger of the two, but just because of the way the knock-out competition went, we had to play them in the semi-final. But out of the league teams, there are three of us who are quite a long way in front of the rest, so those three I think will definitely be strong again this year. But you never know!

What training drills have the robots been involved in?

We want the robots to do lots of training, but at the same time we don't want to wear them out, so we have a variety of things we try and do. We have what we call ‘striker tests’ where we just get one robot and we find how quickly we can kick goals from a variety of places and that's a really good test early on. To work on team skills we play four or five robots against some stationary robots that we place in the way. The last test that we have been doing is playing against ourselves.

In preparation for this year’s game, have you come up against any hurdles?

Every year the rules change to make it more like real soccer. This year the rules changed a lot, so there's a lot of work just to maintain a good level of soccer compared to last year. The goal posts used to be yellow and nothing else on the field was yellow, so it was pretty easy to spot the goal posts no matter where the robots are. Now they’re white so they just look like everything else on the field - all the robots are white and all the lines are white. It's a very common colour and it's very hard for the robots to see the goal posts. Also, the robots now wear their own team jersey and the games start with a whistle in the finals, so they have to be able to listen for a whistle sound as well. There are a lot more extra challenges that you have to fix before you can even get back to the same level as last year, let alone improve on that.

Read the full interview on the UNSW Engineering website.

The robots are coming

How we won the world robot soccer championship