Physicist Dane McCamey has been named NSW Young Tall Poppy of the Year, one of four UNSW researchers recognised for excellence in science and science communication. 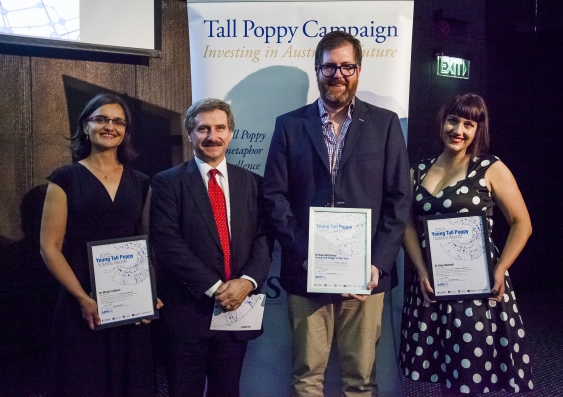 One of 13 prize winners, McCamey won the overall NSW title for his work to identify, characterise and control the many ways that electrons move and interact in electronic materials and devices, such as mobile phones. This work allows him to determine what limits the efficiency of devices and potentially work to improve their structure in future.

UNSW's three other prize-winners were behavioural psychologist Amy Reichelt, computer scientist Mirela Tulbure and biological mathematician Deborah Cromer. The winners, who are nominated by their peers, will spend a year sharing their knowledge with school students, teachers and the broader community.

"The Young Tall Poppies are the research leaders of the future. Many are working across disciplines to provide new insights and are already having a significant impact early in their research careers.”

The Tall Poppy awards are run by the Australian Institute of Policy and Science to honour up-and-coming scientists who combine world-class research with a passionate commitment to communicating science.  The awards are held on a state by state basis to celebrate researchers across science, engineering and mathematics.

Dr Reichelt from UNSW's School of Psychology is an Australian Research Council Discovery Early Career Research Award (DECRA) fellow who has been recognised for her work looking at the effects of modern diets – loaded with fat and sugar – which she has found can negatively affect aspects of memory and can reduce decision-making abilities. 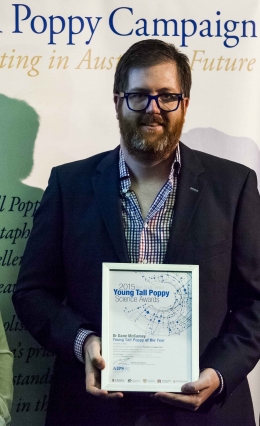 Dr Tulbure, also an ARC DECRA fellow, is a senior lecturer in the School of Biological, Earth and Environmental Science. Her work uses satellite data and high-performance computing to quantify surface water dynamics, currently on the Murray-Darling River Basin. This allows her to trace patterns over decades and across large areas, which strengthens the scientific foundation of water policy.

Dr Cromer uses mathematics to explore the transmission of infectious diseases and to understand how immunity can slow this transmission. A research fellow in the Infection Analytics Program at UNSW Medicine's Kirby Institute, she combines clinical experiments with quantitative analysis to understand questions such as why one person gets sick and another does not and how a disease is transmitted from one person to another.

"The Young Tall Poppies are the research leaders of the future," he said. "Many of these researchers are working across disciplines to provide new insights and they are already having a significant impact early in their research careers.”

The winners were presented with their prizes at a ceremony at the Museum of Applied Arts and Science in Sydney last night.

Putting it off: why we procrastinate

Tall poppies are pick of the crop