A team of five robots and 10 engineers from UNSW will represent Australia at the US$5 million Mohamed Bin Zayed International Robotics Competition, battling 24 teams from 11 countries. 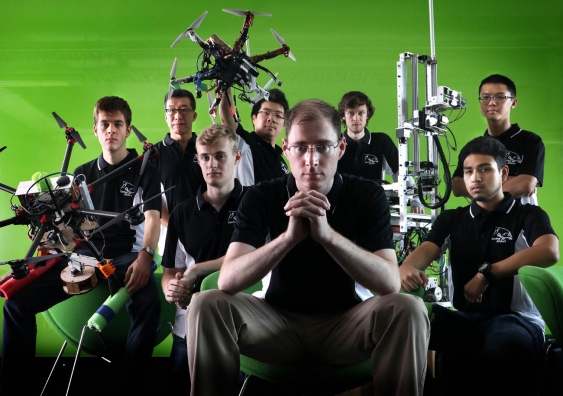 The only Australian team to qualify for the US$5 million Mohamed Bin Zayed International Robotics Competition – the world’s richest – is from UNSW. Its team of five robots and 10 engineers leaves for the United Arab Emirates this weekend to do battle against 24 teams from 11 countries.

“The focus of the competition is disaster response, to push robotics with an ambitious and technologically demanding set of challenges,” said Mark Whitty, a mechatronics engineer at the School of Mechanical and Manufacturing Engineering and lead researcher of the UNSW team.

“Take the Fukushima disaster, when the Japanese reactor went into meltdown. The robots they tried to place in there were unable to do things like walk up a set of stairs, unscrew nuts and bolts – basically, incapable of doing anything useful.”

The UNSW team consists of one unmanned ground vehicle (UGV) and four autonomous hexacopter drones – Flippy, Floppy, Flappy and Fally – developed by the seven students, aged 20 to 26 (three of whom are graduate students now working at Uber, Microsoft and Google), plus three UNSW researchers.

“Our robot drones are going to be put to the test, identifying objects from the air, landing on moving vehicles to pick up those objects, then delivering them to a target site,” said project leader Stanley Lam, a UNSW research associate and recent postgraduate student.

“There’s also a ground vehicle component, where the UGV has to drive to a panel in a location, identify and pick up a certain size spanner, grip it and use it to turn a valve stem – all of this without human intervention – to demonstrate dexterity and mobility of an autonomous mobile platform,” he added. 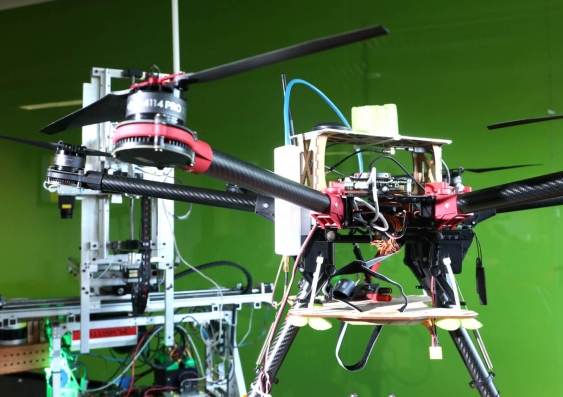 The inaugural Mohamed Bin Zayed International Robotics Competition (MBZIRC) is being held in Abu Dhabi, in the United Arab Emirates, from 16-18 March. Offering $US5 million in prizes, it is to be held every two years.

Of the 143 teams from 35 countries which entered the challenge, only 25 from 12 countries passed the qualifying trials. UNSW was the only successful team from Australia. Other teams to make the cut include the world’s elite universities and research centres: Carnegie Mellon University (USA), ETH Zurich (Switzerland), University of Tokyo and Imperial College London (UK). Teams from Spain, China, USA, UK, Switzerland, Japan, Korea, Germany, Italy, Denmark, Saudi Arabia and Poland will compete.

The competition will be staged at the Yas Marina Circuit on Yas Island, off the coast of Abu Dhabi, home to the annual Formula 1 Grand Prix.

“International competitions like this often play a key role in advancing knowledge,” said Mark Hoffman, UNSW Dean of Engineering. “The development of robotics for search and rescue and disaster response will be accelerated by requiring research into real-life applications like these. Robotics and artificial intelligence is a field in which Australians are recognised as leading players, and UNSW is at the top of the ladder.”