Professor Martina Stenzel is the first woman in almost 90 years to be awarded the Royal Society of NSW's Liversidge Medal. 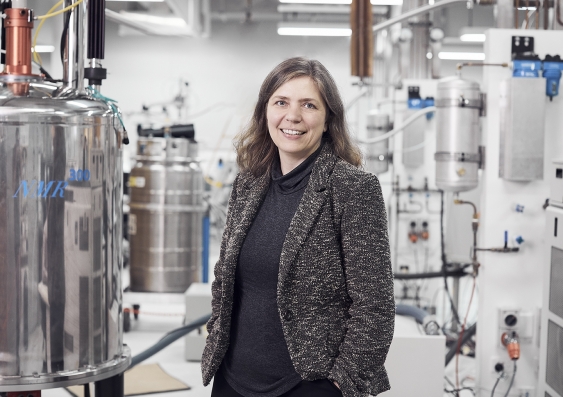 UNSW's Professor Martina Stenzel is the first woman to be awarded the Royal Society of NSW's Liversidge Medal.

One of the world’s leading experts in polymer chemistry, UNSW Sydney Scientia Professor Martina Stenzel, is the first woman to receive the Royal Society of NSW’s Liversidge Medal.

The top science prize, which has been running since 1931, recognises Australian scientists who have made an outstanding contribution to chemistry research.

Professor Stenzel, from UNSW Science’s School of Chemistry, is widely regarded as a global pioneer in the application of novel polymer architectures. By developing chemical techniques for new polymer architectures, Professor Stenzel is creating ‘smart’ nanoparticles for drug delivery that are revolutionising the way disease is targeted and treated.

Her work focuses on the fundamental processes that underpin nanoparticle design to make them suitable for the delivery of proteins, DNA or metal-based drugs to treat cancer – specifically ovarian and pancreatic cancer.

“The Liversidge Medal is such an established prize and it is truly wonderful to be recognised by this enduring and respected scientific academy,” Professor Stenzel said. “I hope it will encourage more women to enter the fields of chemistry and physics, two natural sciences where female scientists have traditionally been very few and far between.”

As Co-Director at UNSW's Centre for Advanced Macromolecular Design, Professor Stenzel leads a team of 20 researchers working to combine synthetic polymers with nature's building blocks such as carbohydrates, peptides and proteins. The team of researches work at the intersection of polymer science, nanoparticle design and medicine.

The creation and adaptation of nanoparticles for various biomedical applications is the focus of Professor Stenzel’s current research. By designing nanoparticles of different shapes, sizes and surface functionalities the nanoparticles can then be “loaded” with various drugs, mimicking a water-filled sponge.

“The beautiful thing about nanoparticles is that they can be modified in endless ways,” Professor Stenzel said. “We are trying to better understand the physical properties of these drug-loaded nanoparticles as it is directly linked to the biological activity. The aim is to create nanoparticles with the right properties that can invade cancer cells but not attack healthy cells.

Professor Stenzel said that while nanoparticles were most commonly used in cancer treatment, they could potentially be so used for treatment of many other diseases, including Parkinson’s disease, Alzheimer’s, diabetes and infectious diseases.

The Liversidge Lecture, awarded every two years, is given on the recommendation of the Royal Australian Chemical Institute (RACI). UNSW Scientia Professor Justin Gooding was the last recipient of the award in 2016.

Professor Stenzel will give the Liversidge Lecture in February 2020. The lectures are published in the Journal and Proceedings of the Society.