It may officially be the world’s fastest electric car, but Sunswift eVe ­– Australia’s entry in the annual international solar car race – has a tough battle ahead to beat cashed-up teams from the Netherlands and Germany. 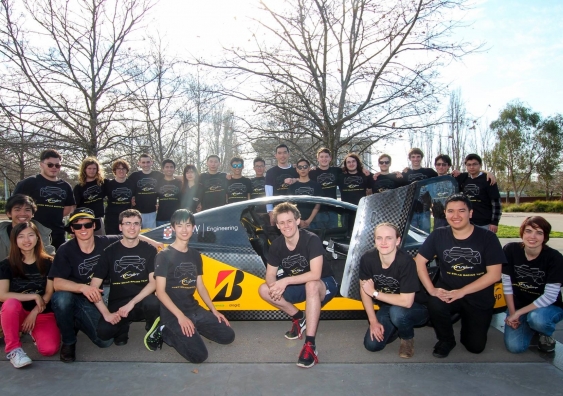 The UNSW Solar Racing Team Sunswift at a recent test run in Canberra. Sitting in the car is team leader Hayden Smith.

It may officially be the world’s fastest electric car, but Sunswift eVe ­– Australia’s entry in the annual international solar car race – has a tough battle ahead to beat cashed-up teams from the Netherlands and Germany.

The Australian two-seater sports coupé built by the student-run UNSW Solar Racing Team Sunswift will again compete in the gruelling 3,021 km race from Darwin to Adelaide, officially known as the Bridgestone World Solar Challenge. This year, 46 teams from around the globe will be joining the race from 18-25 October.

The University of New South Wales team, made up of 35 engineering students, is in the Cruiser Class, the most technically challenging division and in which the UNSW team is the only Australian entrant. The black and yellow UNSW coupé will be battling it out against bigger and better-funded teams from Germany, the United States, Netherlands, United Kingdom, Japan and others.

The car to beat will likely be Stella Lux, the 390 kg carbon fibre and aluminium four-seater car produced by students at the Technical University of Eindhoven, which won the 2013 World Solar Challenge, and has been upgraded substantially since. The next hot competitor is SunRiser, a slick teardrop-shaped 360 kg aerodynamic collaboration between the German multinational conglomerate ThyssenKrupp and Bochum University of Applied Sciences.

“They operate on one million dollar budgets,” said Hayden Smith, team leader of Australia’s Sunswift. “And they have far broader support from government and corporations in their countries. Green engineering, or engineering in general, is usually better supported overseas.”

The European competitors have stylish form-fitting interiors with loads of on-board computing power and access to advanced facilities like wind tunnels. By contrast, the UNSW team uses hand-made components built at a cramped workshop in Randwick, with materials like carbon-fibre shells and silicon solar cells donated by a host of sponsors who have backed the team.

But what the Australian team has in spades is brains and a determination to succeed, and a team spirit that sees students work hard and innovate their way out of problems, finding often cheaper solutions to technical challenges.

“We sometimes have people that spend 80-100 hour weeks at the workshop – just crazy hours,” said Smith. “What drives people is that it’s just such an incredible learning opportunity: you're learning how to build a car to road standards and to race standards. Everyone just wants to not only see the car that their building perform well, but also see what other cars around the world are doing.”

In July 2014, the 360 kg Sunswift eVe broke the world land-speed record for an electric vehicle, travelling at an average 107 km/h over a distance of 500 km on a single charge. This demolished a record of 73 km/h which had stood for 26 years. The Fédération Internationale de l’Automobile recognised the achievement with a world record trophy.

The design and construction of Sunswift eVe began in early 2012 and was completed within 18 months, in time for the 2013 World Solar Challenge’s new Cruiser Class competition. It cost $500,000 and was designed to resemble a two-seater sports car, rather than the typical space-age style of most solar vehicles. It took out line honours and overall third place in the Cruiser class in 2013, while also hitting the highest top speed of 132 km/h.

On a single charge of its batteries, Sunswift eVe can travel up to 500 km ­– or over 800 km if powered by its own solar cells as well. Once depleted, the batteries can be recharged in 10 hours on a household power socket, or in less than 7 hours using a commercial charging station. It costs around 80¢ to fuel the car for every 100 km, compared to an average $15 for a conventional petrol car.

The Sunswift team consists of undergraduate students from engineering, industrial design and business. Despite its team members being largely engaged in full-time study, Sunswift has remained competitive in all of its races, earning prestige and recognition on the world stage as well as training young engineers to work at the forefront of their profession.

A number of former Sunswift team members have moved on to establishing their own companies and others have landed excellent jobs, including working at US electric sports car maker Tesla and Formula 1 racing teams. Many ex ‘Sunswifters’ remain in touch with the current team after graduation, acting as mentors and advisers to the new recruits, thus helping to continue the standard of excellence that has been embodied in the team since its founding in 1995.