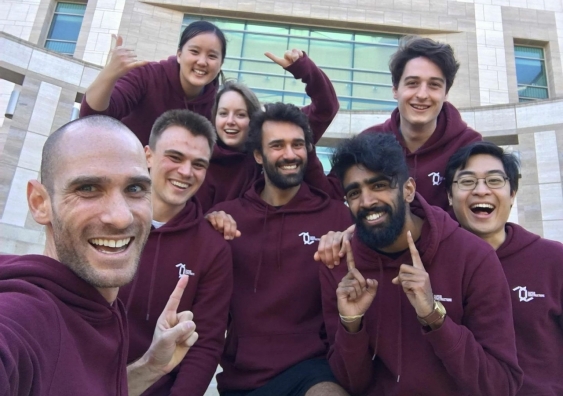 Members and supporters of the Capsid Constructors team celebrate their victory. Photo: Supplied

The team of UNSW undergraduates, called Capsid Constructors, defeated 22 other teams from around the world in the BIOMOD competition, which was held this year at the University of California San Francisco.

The interdisciplinary team was drawn from the UNSW Faculties of Science, Engineering, Law, and Arts & Social Sciences.The students were mentored by members of the laboratory of Dr Lawrence Lee from UNSW's School of Medical Sciences, including PhD and honours students from the UNSW EMBL Node for Single Molecule Sciences.

This year’s win caps a great record for Australia and UNSW in the BIOMOD competition. An Australian team has competed every year since 2014, winning the Grand Prize in 2014, 2016 and 2017. The team included UNSW students in 2014, and has been made up entirely of UNSW students in the past three years.

The team investigated the spontaneous construction of the human immunodeficiency virus (HIV) in living systems. They constructed nanoscale scaffolds made from DNA to try to artificially construct the HIV capsid, or protein shell surrounding the virus.

The aim was to learn how the virus and biological systems in general can self-assemble complex, dynamic and robust structures spontaneously, and to potentially create a new platform to screen for anti-HIV therapies. 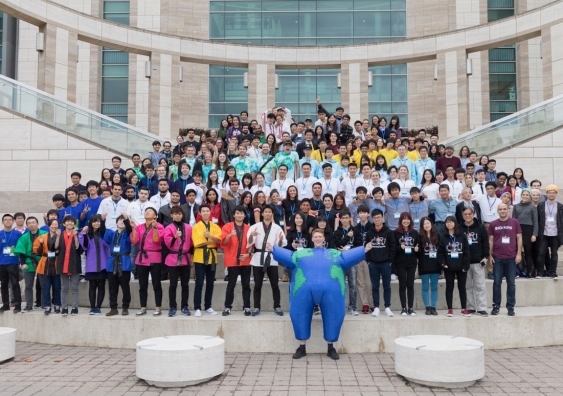 Twenty three teams from countries including Australia, Canada, the US, Japan, China, and the UK competed in the 2017 BIOMOD competition. Photo: Supplied

BIOMOD teams presented their work to a panel of 38 judges. They were not only assessed on their presentation, but also on their project website and video describing their project to a more general audience.

Capsid Constructors also placed first for their YouTube video, second for their project website and presentation, and third in the audience choice award.

"It shows the enormous amount of work done by the team in a short 4-5 months while most were also juggling full-time University commitments," says Dr Lee.

"Regardless of the outcome of the competition, the true benefit comes from giving these students the opportunity to engage in the process of innovation and discovery, which can be difficult to provide in depth at an undergraduate level.

"In addition, the students gain valuable exposure to the international research community. In this sense the victory for all students is achieved well before the announcement of any prizes," he says.

A second Australian team based at the University of Sydney also competed this year against teams from countries including Canada, the US, Japan, China and the UK. 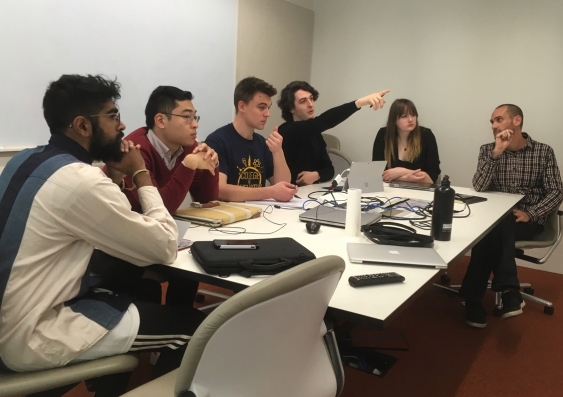 The HIV capsid has been the subject of much research in recent years. Attempts to construct the HIV capsid in vitro have not been successful under physiological conditions. Underlying this difficulty is a failure to fully understand the fundamental principle of self-assembly

The team’s solution was to construct the HIV viral capsid artificially using synthetic DNA structures to create a template for self-assembly of capsid proteins. They constructed arbitrary shapes with DNA origami, and attached proteins at fixed distances with sub-nanometre precision.

This allowed them to control, manipulate and observe the process of self-assembly on a molecular scale and develop a methodology to conjugate engineered proteins to designed DNA structures. The methodology that they’ve developed will help pave the way for future research into other areas such as targeted drug delivery systems.