Two Australian satellites, feared lost after being deployed from the International Space Station, have been recovered by UNSW engineers after weeks of a fraught, and at times heart-stopping, recovery operation. 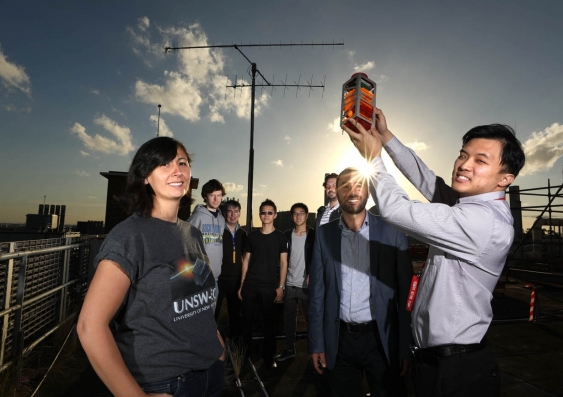 Two Australian satellites, feared lost after being deployed from the International Space Station, have been recovered by a team led by UNSW engineers after weeks of a fraught – and at times heart-stopping – recovery operation.

“It was like something out of Apollo 13,” said Elias Aboutanios, project leader for UNSW-EC0, the first Australian-built satellite in 15 years to go into space. “Our satellite was orbiting at 27,000 km/h almost 400km above our heads. We couldn’t see it, couldn’t inspect it, and had almost no data to work with. So we were busting our heads trying to figure out what could have gone wrong, and how to regain contact.”

The UNSW ground control team, with help from ham radio operators and colleagues at the Australian National University (ANU) and the University of Sydney, regained control of both cubesats last week.

In all, three Australian research satellites – two built at UNSW – blasted off on 19 April from Cape Canaveral as part of the international QB50 mission, a swarm of 36 small satellites (known as ‘cubesats’) designed to explore the little-understood region above Earth known as the thermosphere. 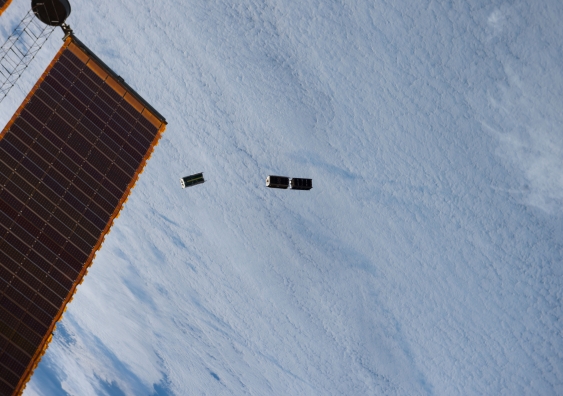 Three of the QB50 cubesats being deployed from the International Space Station.

Each of the QB50 cubesats is the size of a loaf of bread, weighing less than 2 kg, and will carry out the most extensive measurements ever undertaken of the thermosphere, a region between 200 and 380 km above Earth. This poorly-studied and usually inaccessible zone helps shield Earth from cosmic rays and solar radiation, and is vital for communications and weather formation.

Within 30 minutes of deployment from the ISS, both UNSW-EC0 and INSPIRE-2 were meant to transmit a beacon. But no signal was detected from either by the ground teams at UNSW’s Australian Centre for Space Engineering Research (ACSER) or the ANU when the cubesats flew over Sydney, which they do twice a day.

The ACSER team began to suspect the cubesats’ batteries might be to blame. In the nine months since both cubesats had been dispatched to Europe for testing, and eventually to the US for launch, they might have lost partial charge: enough that they were now unable to extend the antennas. With their antennas stowed, their beacons would now be too weak for the UNSW or ANU ground stations to detect. 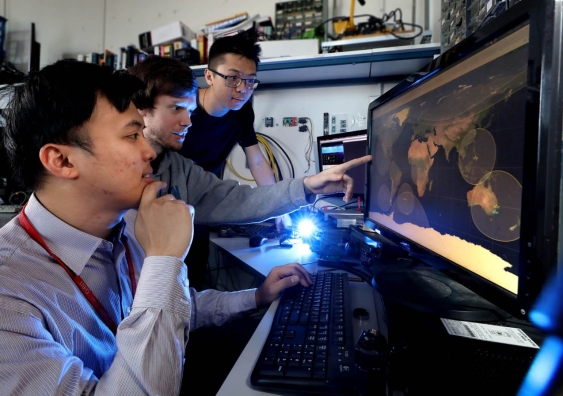 “If batteries were the issue, the satellites have solar panels and should have been able to recharge,” said Joon Wayn Cheong, a research associate at UNSW and technical lead for both cubesats. “But that would have taken just one or two orbits. Yet, after almost a week, we still heard nothing. Clearly, something else was wrong.”

The engineers theorised that the satellites might be trapped in a vicious discharge/recharge loop: they didn’t have enough power to extend antennas, but could not recharge completely because they were repeatedly trying to deploy antennas and stabilise orientation, draining the batteries again and again. So the ACSER team wrote software commands telling the cubesats to power down and wait until being fully recharged before deploying antennas.

But before the commands could be sent, the engineers needed to find more powerful transmitters that the satellites – operating with stowed antennas – could hear.

Aboutanios, who is deputy director of ACSER, reached out to the Defence Department, Optus, the CSIRO and NASA, but no equipment was immediately available or could broadcast on the right frequencies. Meanwhile, Cheong, who has an amateur radio licence, contacted his worldwide network.

That’s when Jan van Muijlwijk came to the rescue. The sound technician near Groningen, in the Netherlands, had access to the Dwingeloo radio telescope, a restored 25-metre dish from the 1950s that was once used for astronomy and is now run by amateur astronomers and ham radio enthusiasts. 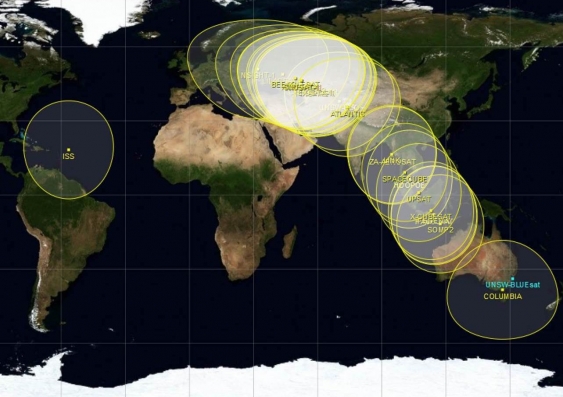 A NORAD map with the location of the international Space Station (left circle), and the QB50 constellation of 28 satellites (right) in orbit above Earth. Image: Elias Aboutanios/UNSW

Problem was, van Muijlwijk could only help on weekends, which meant a tense wait. On the first attempt, on Saturday 10 June, the Dwingeloo dish detected a weak signal from INSPIRE-2, and immediately uplinked the new commands. But when the Dutchman pointed the dish at UNSW-EC0, there was only silence.

On INSPIRE-2’s next orbital pass, at midnight on Sunday 11 June, a clear beacon was detected by the Dwingeloo dish in the Netherlands and by former UNSW engineer Barnaby Osborne now at the International Space University in France, and later by INSPIRE-2 team member Dimitrios Tsifakis at ANU, along with ham radio operators in Spain, the US and Australia.

ACSER’s team at UNSW, who had managed the ground segment for the INSPIRE-2 project, were elated. But also stumped. Why was UNSW-EC0 still silent? Had they identified its problem, or was something else wrong? Had some other component failed? Would they ever be able to contact the satellite?

Aboutanios, Cheong and their UNSW colleagues – Ben Southwell, William Andrew, John Lam, Luyang Li and Timothy Guo – regrouped to review what they knew, and work through more scenarios. They also looped in Osborne in France and Tsifakis in Canberra. 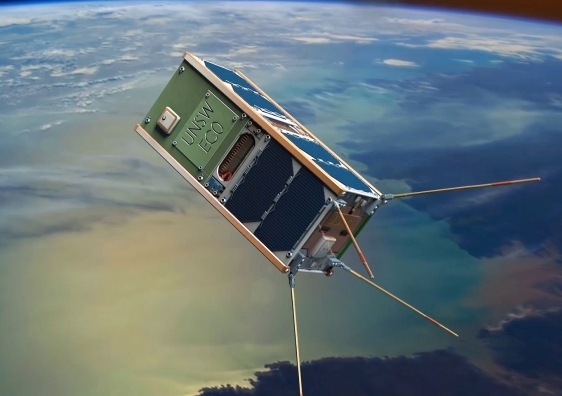 Illustration of the UNSW-EC0 cubesat in orbit above Earth. Image: Jamie Tufrey/UNSW

To find ‘Echo’ – as they now dubbed their satellite – the team had relied on positioning data from NORAD (North American Aerospace Defence Command), which tracks and catalogues objects orbiting Earth. The cubesats had been shot out of the ISS in threes, and NORAD had detected this. It had then waited for the three cubesats to drift apart enough that they could be tagged with their names and positions.

But what if NORAD had mislabelled UNSW-EC0? Could they be listening for – and transmitting commands to – the wrong satellite?

They went back through the NORAD data and identified the other two satellites deployed at the same time – Nanjing University’s NJUST-1 and University of Colorado’s Challenger – then asked van Muijlwijk to point his dish at the other two cubesats and listen for UNSW-EC0’s beacon from those instead.

“As soon as the Dwingeloo dish pointed to what the NORAD data said was the Challenger cubesat, it detected a weak signal that was clearly from UNSW-EC0,” recounted Cheong. “So they fired off the reset commands. And on the very next orbital pass, they received a beautiful, clear signal from UNSW-EC0.”

Aboutanios mused: “For more than three weeks, we were looking in the wrong part of the sky for our satellite – we couldn’t have known that. But the procedures we put in place, the scenarios we ran and the solutions we developed, they all paid off. You could say we succeeded by engineering the heck out of this.” 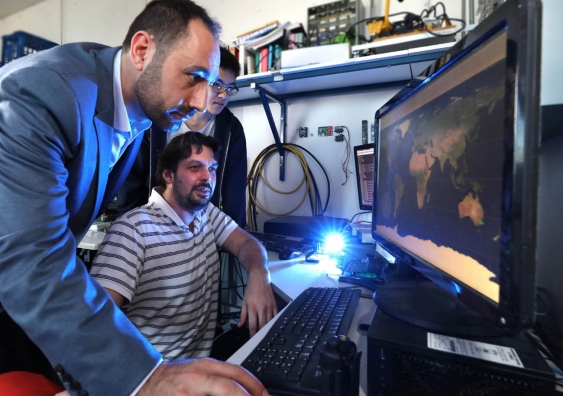 “This is a great example of Australian engineering ingenuity and perseverance, this time in space,” said Mark Hoffman, Dean of Engineering at UNSW. “A focused, collaborative team worked the problem, utilised diverse skills and tools to develop solutions until they had it resolved. That, in a nutshell, is engineering excellence.”

University of Sydney’s Iver Cairns, leader of INSPIRE-2 team, said it had been an agonising experience. “It was intensely frustrating, and surprising, to hear nothing from INSPIRE-2 or UNSW-EC0, since both are very robust satellites that passed their pre-flight tests with flying colours. But the recovery effort, led by our UNSW and ACSER colleagues, was a real international team effort, and something we should all be very proud of.”

UNSW-EC0 and INSPIRE-2 now join the 20 other QB50 satellites successfully contacted so far. They were joined on Friday 23 June by another eight QB50 cubesats, launched into orbit by India’s Polar rocket from the Satish Dhawan Space Centre north of Chennai.

Of the 28 QB50 cubesats originally deployed from the ISS in May, eight have still not been heard from – including Australia’s third cubesat, SuSAT. “We’ve reached out to our colleagues in Adelaide to see if we can help,” added Aboutanios.

The two recovered Australian satellites will now go through a long testing process leading to their commissioning. Later this year, they will join other active QB50 satellites in collecting scientific data.

The three research cubesats are the first Australian satellites to go into space in 15 years; there have only been two before: Fedsat in 2002 and WRESAT in 1967.

“We’ve got more hardware in space today than Australia’s had in its history,” said Andrew Dempster, director of ACSER and a member of the advisory council of the Space Industry Association of Australia. “The QB50 mission shows what we can do in Australia in the new world of ‘Space 2.0’, where the big expensive agency-driven satellites are being replaced by disruptive low-cost access to space.”

LINKS TO VIDEO, IMAGES AND BACKGROUND