The first Australian satellite in 15 years, UNSW-EC0, was successfully deployed from the International Space Station, and UNSW engineers are working to make contact when it next passes above Sydney. 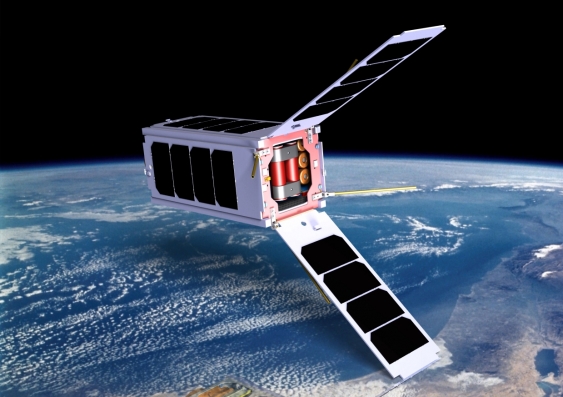 The first Australian satellite in 15 years, UNSW-EC0, was successfully deployed from the International Space Station, but the UNSW engineers who built it were unable to establish contact when it made its first pass above Sydney.

However, engineers say there could be many reasons for the silence and they are not overly concerned.

UNSW-EC0 was ejected from the station at 3:25pm AEST, and made its first pass over Sydney at 4:21pm AEST. Engineers at UNSW’s Australian Centre for Space Engineering Research (ACSER) were unable to pick up the signal it is meant to send to confirm the cubesat is operating as designed.

“We’re not overly concerned yet,” said Elias Aboutanios, project leader of the UNSW-EC0 cubesat and deputy director of ACSER. “We’re troubleshooting a number of scenarios for why we didn’t detect it, from checking our ground equipment to exploring the possibility that the batteries might have discharged. But at the moment, we just don’t know.”

“If it is the batteries, the satellite has solar panels and will be able to recharge,” said Joon Wayn Cheong, a research associate at UNSW’s School of Electrical Engineering and Telecommunications and technical lead of the UNSW-EC0 cubesat. “But because it was deployed in the Earth’s shadow, we have to wait for it to make a few orbits before it has recharged, especially if it’s tumbling. So it could be 24 to 48 hours.”

The International Space Station, or ISS, will make four more passes over Sydney on Friday 25 May, and the UNSW team of 15 researchers and students will again try to establish contact, and run a series of tests for scenarios to explain the lack of a signal.

These are the first Australian satellites to go into space in 15 years... we’ve got more hardware in space today than Australia’s had in its history.

UNSW-EC0 is one of three Australian research satellites – two of them built at the UNSW – that blasted off just after on April 19 from Cape Canaveral Air Force Station in Florida. Its mission is to explore the little-understood region above Earth known as the thermosphere, study its atomic composition as well as test new robust computer chips and GPS devices developed at UNSW.

In addition, its chassis is made entirely from 3D-printed thermoplastic, itself an experiment to test the reliability of using 3D-printing to manufacture satellites, making them cheaper and much more customisable.

The cubesat is part of an international QB50 mission, a swarm of 36 small satellites – known as ‘cubesats’ and weighing about 1.3 kg each – that will carry out the most extensive measurements ever undertaken of the thermosphere, a region between 200 and 380 km above Earth. This poorly-studied and usually inaccessible zone of the atmosphere helps shield Earth from cosmic rays and solar radiation, and is vital for communications and weather formation.

“These are the first Australian satellites to go into space in 15 years,” said Andrew Dempster, director of ACSER at UNSW, and a member of the advisory council of the Space Industry Association of Australia. “There have only been three* before: Fedsat in 2002, Australis OSCAR 5 in 1970 and WRESAT in 1967. So we’ve got more hardware in space today than Australia’s had in its history.”

UNSW-EC0 was deployed from the ISS from a Nanoracks launcher, a ‘cannon’ that eject cubesats at a height of 380 km (the same as the ISS), allowing them to drift down to a lower orbit where they can begin their measurements.

“This zone of the atmosphere is poorly understood and really hard to measure,” said Aboutanios. “It’s where much of the ultraviolet and X-ray radiation from the Sun collides with Earth, influencing our weather, generating auroras and creating hazards that can affect power grids and communications.

“So it’s really important we learn a lot more about it. The QB50 cubesats will probably tell us more than we’ve ever known about the thermosphere,” he added.

QB50 is a collaboration of more than 50 universities and research institutes in 23 countries, headed by the von Karman Institute (VKI) in Belgium. “This is the very first international real-time coordinated study of the thermosphere phenomena,” said VKI’s Davide Masutti. “The data generated by the constellation will be unique in many ways and they will be used for many years by scientists around the world.”

*Updated on 31 May to correct the number of previous Australian satellites from two to three, to include the  Australis OSCAR 5,  an amateur radio satellite built by students at Melbourne University in 1970.

A satellite to save Australia? We should have one of those