Opinion Want to avoid a bluebottle sting? Here's how to predict which beach they'll land on

The direction a beach faces, relative to wind direction, largely determines how many bluebottles are pushed to shore. 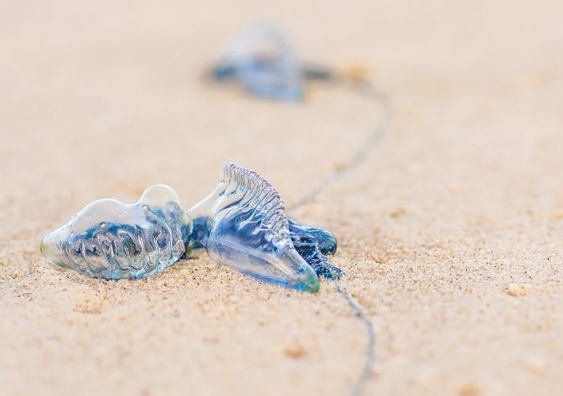 The direction a beach faces, relative to wind direction, largely determines how many bluebottles are pushed to shore. Photo: Shutterstock

If you’re among the one in six Australians to experience the bitter pain of a marine stinger such as a bluebottle, you’ll know how quickly they can end a fun day at the beach.

We can’t stop the summer winds that deliver these creatures to our shores, but we can choose the safest spots to swim.

Our recent research provides the first evidence of what transports bluebottles to Australian beaches.

We found the direction a beach faces, relative to wind direction, largely determines how many bluebottles are pushed to shore. We hope these findings will help beachgoers safely plan where to take their next dip. 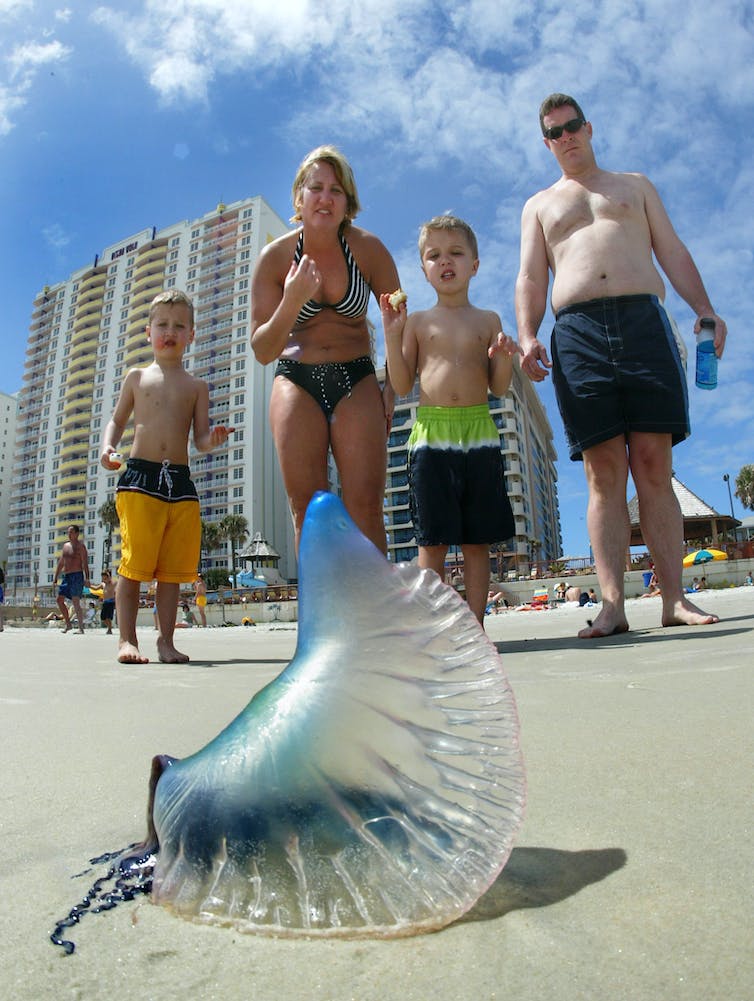 We can avoid bluebottles by understanding more about their drift. Photo: Jim Tiller/AP

The bluebottle is a jellyfish found mostly along Australia’s east coast.

Most bluebottle stings occur while swimming, and are the top reason people seek assistance from surf lifesavers.

Bluebottles aren’t a single animal. They’re a floating colony of individual organisms, each variously responsible for reproducing, capturing or digesting food and catching the wind.

The bluebottle’s long, trailing tentacles are designed to sting prey and creatures they feel threatened by, including humans.

Bluebottles do not swim, but drift on the ocean’s surface. Their inflated blue bladder is sensitive to aerodynamic forces and acts as a sail.

Currents drive a bluebottle’s long tentacles below the ocean’s surface and wind drives the sail above it.

The bluebottle as a sailboat

A bluebottle’s body, including the tentacles, is not aligned with its sail.

Some sails point to the left of the body, and others to the right. This quirk is thought to help populations survive.

If all bluebottle sails pointed the same way, an entire group might pick up a prevailing wind and be blown to shore. But when half the group has sails facing the other way, some individuals are blown in a different – and hopefully less perilous – direction.

Our previous research sought to shed light on bluebottle drift by examining physical equations that determine how sailboats respond to winds and currents. 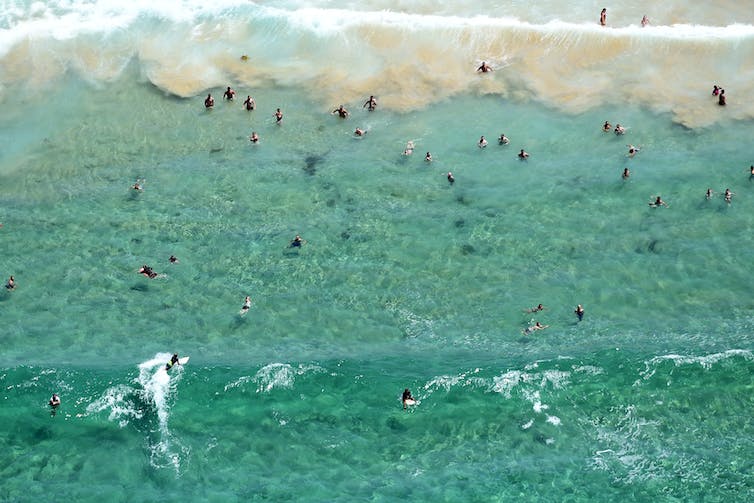 Our latest research explored how winds and other environmental factors affect bluebottle beaching.

Cold temperatures have previously been thought to hinder bluebottle movements. But we recorded bluebottles on beaches in winter and spring, which suggests other factors are at play.

Our research found wind direction was the main factor driving bluebottles onshore. On Australia’s east coast, both northeast and southerly winds bring bluebottles towards the beach.

Crucially, we also found the shape of the coastline, and its orientation relative to prevailing winds, affects the rate of bluebottle arrivals.

Maroubra faces east and is the longest and most wind-exposed of the three beaches. We found a summer north-easterly wind at Maroubra led to a 24 per cent chance of bluebottles the following day.

But at nearby Clovelly beach, the chance was just 4 per cent. Clovelly faces south and sits relatively protected at the end of a narrow bay. However, after southerly winds, the chance of bluebottle encounter there increased to 12 per cent.

Coogee faces south and is smaller than Maroubra. A small rocky outcrop limits exposure to the ocean and therefore exposure to bluebottles.

Overall, bluebottles were most likely to be found at Maroubra, followed by Coogee then Clovelly. This reflects their varying beach lengths and orientation with respect to prevailing winds. 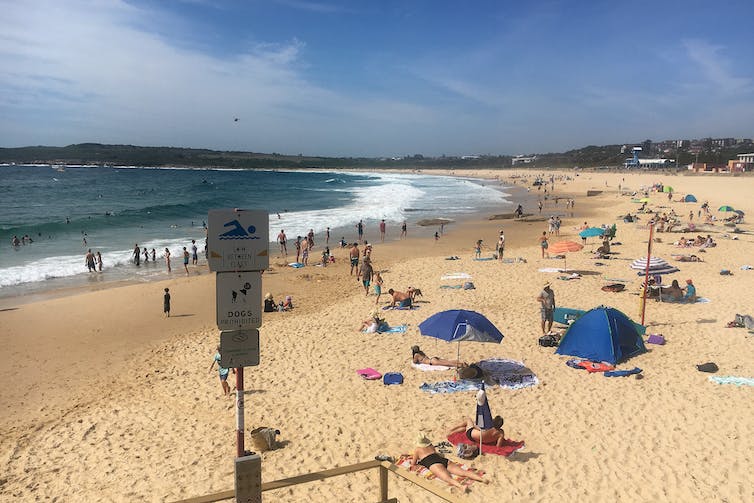 Maroubra had a 24 per cent chance of bluebottles after a summer north-easterly. Photo: Sam Mooy/AAP

Planning your day at the beach

These conclusions can be applied beyond the beaches we studied. By checking beach orientation with wind direction, we can make an educated guess as to whether the chance of encountering bluebottles is high at any beach.

We know bluebottles are pushed around 50⁰ left or right of the wind direction. So a quick drawing in your head or on the sand may tell you which nearby beach is likely to be safest.

But there are exceptions to this rule. Strong ocean currents, for example, can influence bluebottle drift, especially when winds are weaker.

Rips and the circulation of water in surf zones are also linked to bluebottle beaching.

And bluebottles can extend and contract their sails and stinging tentacles which may change the direction of their drift.

So before entering the water, take plenty of precautions against bluebottles and other dangers. Surf Life Saving Australia urges all beachgoers to: 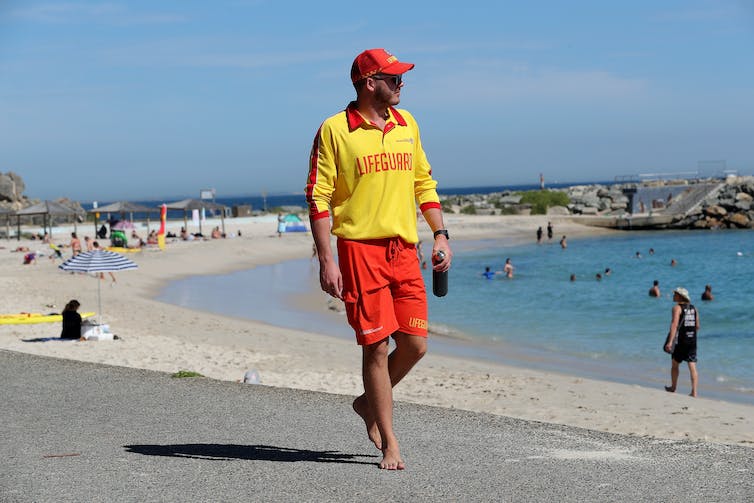 Plan to swim at a patrolled beach. Photo: Richard Wainwright/AAP

Further research is needed to better understand bluebottles, including how climate change, and subsequent warming oceans, will affect their drift.

Citizen science provides a powerful opportunity to learn about bluebottle distribution, size and arrival at our beaches.

Next time you see bluebottles at the beach, take photos and upload them to this project in the iNaturalist app.

In this way, you can help researchers discover more secrets of these beautiful marine creatures – which will hopefully lead to fewer painful bluebottle encounters.