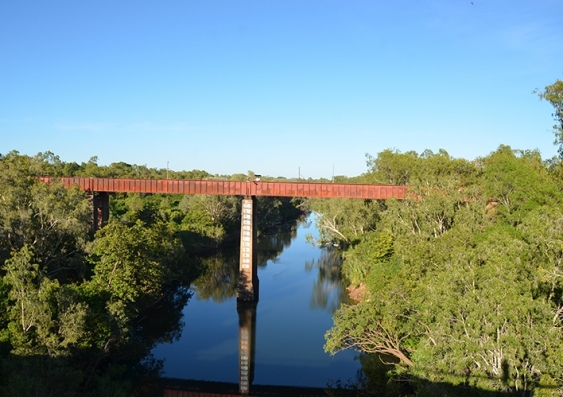 Plans to allocate water from the Northern Territory’s Daly River to cotton plantations could be based on overly optimistic expectations about streamflow, a new study of tree rings in the area has found.

And if streamflow – the volume of water that churns through the river in a given period – of the Daly River goes through more ‘dry’ spells like it did in 2019 and 2020, the health of the river ecosystem could be severely compromised.

In a paper published today in the journal Water Resources Research, researchers from UNSW Sydney described how they reconstructed the area’s paleoclimatic history by using novel methods that combined streamflow records, statistics and tree-ring data from not only local trees, but many others throughout Australasia.

They reconstructed a rainfall period that went back more than 500 years to find that the monsoon system affecting Northern Australia swung between very wet periods of high rainfall and greater streamflow, and drier periods of substantially lower flows in the Daly and connected rivers.

Philippa Higgins, UNSW PhD candidate and lead author of the study, says the window of data the NT government might use to base its allocations on doesn’t take into account the longer history of streamflow in the river.

“If you base water allocations on a period that’s a lot wetter than the historical period, you’re at a big risk of over-allocating that resource,” Ms Higgins says.

In other words, if streamflow goes back to historical levels when monsoon rainfall is much less than in recent decades, we could see “major environmental and cultural damage,” says Ms Higgins.

“Overallocation of water resources combined with consecutive years of low rainfall that results in reduced streamflow in the river could reduce water quality, negatively impact aquatic species and river vegetation, and potentially damage sites of significance for Indigenous custodians.”

Ms Higgins says if calculations of water resource potential are based on gauge data that only stretches back a few decades at a time when streamflow has increased at unprecedented levels, such assumptions could be overly optimistic.

“We only have records for streamflow in the Daly that go back 50 or 60 years.

“However, our new method of deriving the paleo climate based on tree-rings goes back almost 600 years. And we see in that time, even as late as the mid 20th century, that the monsoon season was drier, leading to much lower streamflow.”

Ms Higgins and fellow researchers call on the NT government and water managers to look at the bigger picture, as revealed by their research. They say that their reconstruction of 592 years of streamflow using tree-ring data and complex statistical analysis showed that wet periods invariably give way to years of reduced rainfall and lower streamflow.

“So we caution on using just a very small amount of data to calculate water allocations for agricultural use when we have methods available to look at much longer time periods that allow us to better understand the risks of different decisions.” 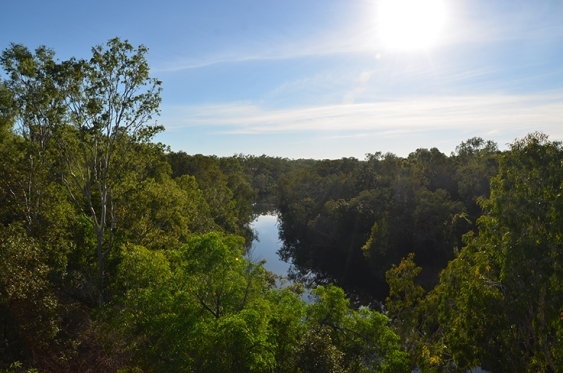 The trend towards increased streamflows in the Daly River is unprecedented over the last 600 years, according to tree ring data. Photo: Martin Andersen/UNSW

Tree history and the Daly River

The team reconstructed the streamflow patterns by comparing tree rings with known rainfall and streamflow data of the Daly River. Because rainfall records are much longer than the streamflow data, this allowed the team to set up a model of the climate’s relationship with tree rings. Researchers now had the ability to look at the tree rings corresponding to Daly River records of streamflow and work backwards to deduce the climatic changes going back hundreds of years.

So does this mean there are some very old trees near the Daly River? Not exactly. Ms Higgins says the longest tree ring record in the Daly River study was 250 years, but the team was able to use much older tree ring data from south-east Asia that were subject to the same monsoon climatic conditions.

“One of the strengths of this study is we’ve used a network of tree rings,” she says. “Regionally, the Australian monsoon is pretty well related to the Indian monsoon, so we used that correlation to also incorporate tree rings from Asia into our reconstruction.”

One of the surprises in the study was that there was an observable correlation between higher river flows and La Niña climate changes, but no correlation with El Niño dry spells. Streamflow has increased gradually since the 1800s, but strong increases in the most recent 40-year period are unprecedented in the last 600 years.

“More work is needed to understand the drivers of this increased streamflow,” the authors conclude.

The researchers say their method of combining tree rings, rainfall and streamflow records in their statistical models to reconstruct a climatic history of the Daly River is a first in the discipline of hydrology. They hope the new technique will be used in other locations where climatic data is lacking to enable stronger environmental planning and regulation.