Eastern Australia's wetlands have dried up in the drought and waterbird numbers have dropped to well below long-term averages, an aerial survey led by UNSW researchers has revealed. 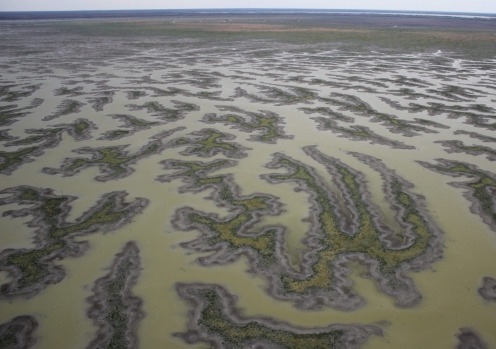 Wetlands in eastern Australia have dried up in the drought and waterbird numbers have dropped to well below long-term averages, an aerial survey led by UNSW researchers has revealed.

“The results are sobering. The total wetland area was the smallest we have seen in 33 years of annual surveys and the number of breeding waterbirds was also the lowest on record,” says project  leader and Director of the UNSW Centre for Ecosystems Science Professor Richard Kingsford.

The Centre’s annual survey covers a third of the continent and provides one of Australia’s most important long-term datasets on the health and biodiversity of the country’s river and wetland areas.

The scientists fly in a small plane along ten east-west survey bands that stretch from the Northern Territory to Victoria, observing around 2000 wetlands and estimating numbers of more than 50 species of waterbirds including swans, ducks, herons and small migratory shorebirds.

This year’s survey, carried out in October and November, revealed that many of the regularly surveyed wetlands in the Lake Eyre Basin and Murray-Darling Basin were dry or held little water, apart from the Lower Lakes and the Coorong in South Australia.

In Queensland, water in the Diamantina River, Georgina River and Cooper Creek were confined to the large waterholes while their large lakes, including Lakes Galilee, Yamma Yamma, Torquinnie and Mumbleberry on the edge of the Simpson Desert, were all dry.

Waterbirds were concentrated in a few sites, with only four wetlands holding more than 5000 birds each – making up about 20 per cent of the total number spotted.

“The floods in 2010 and 2011 that broke the Millenium Drought produced a boom in waterbirds, but numbers have dropped away since then, continuing a long-term decline,” says Professor Kingsford.

“This reflects the fact that rainfall in eastern Australia has been well below average for the past three years.”

“The environmental flows are really critical in providing some respite to the wetlands and their waterbirds through these extended dry periods,” says team member and UNSW Centre research fellow Dr Kate Brandis.

The report is provided to State and Commonwealth agencies to assist in the determination of hunting seasons and the implementation of the Murray-Darling Basin Plan, including tracking the effectiveness of environmental flows.