Australian wildlife can generally cope with drought, but they're not prepared for the combination of people, introduced animals, and no water. 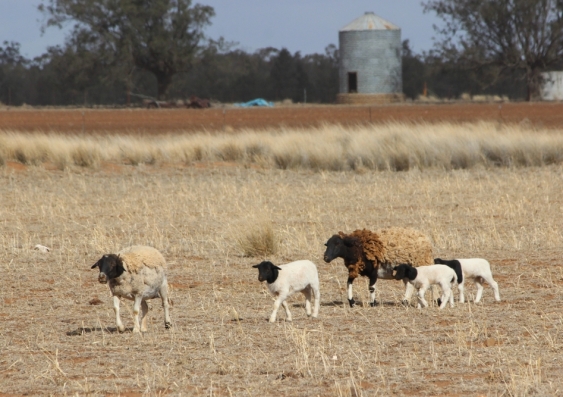 Sheep with lambs in north west NSW, Australia, during the 2018 drought. Image from Shutterstock

Australian rural communities face hardships during extended drought, and it is generally appropriate that governments then provide special support for affected landholders and communities.

However, some politicians and commentators have recently claimed that such circumstances should be addressed by circumventing environmental laws or management – by, for example, reallocating environmental water to grow fodder or opening up conservation reserves for livestock grazing.

But subverting or weakening existing protective conservation management practices and policies will exacerbate the impacts of drought on natural environments and biodiversity.

Impacts of severe weather on some natural systems are obvious and well-recognised. For example, during periods of elevated sea temperature, coral bleaching may conspicuously signal extensive environmental degradation and biodiversity loss.

On land, however, the impacts of comparable extreme climatic events on natural systems may be less obvious, even if of comparable magnitude.

Nonetheless, the record is clear: drought leads to extensive and severe declines in many wildlife species.

Early observers in Australia reported the collapse of bird communities (“the bush fell silent”) and other wildlife across vast areas during the Federation Drought.

There were comparable responses during the Millennium Drought.

Unsurprisingly, wetland environments, and species dependent on them, may bear the brunt of impacts. That said, impacts are pervasive across all landscapes exposed to drought.

Drought contributed to the extinction of one of Australia’s most beautiful birds, the Paradise Parrot. For example, the pastoralist and zoologist Charles Barnard noted:

Previous to the terrible drought of 1902 it was not uncommon to see a pair of these birds when out mustering … but since that year not a single specimen has been seen … For three years… there had been no wet season, and very little grass grew, consequently there was little seed; then the worst year came on, in which no grass grew, so that the birds could not find a living, and … perished … they have not found their way back. 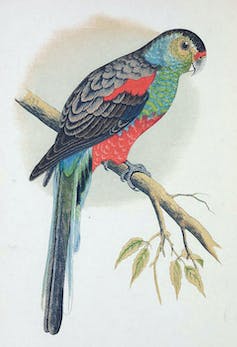 Drought contributed to the extinction of one of Australia’s most beautiful birds, the Paradise Parrot. Wikimedia, CC BY

After the long droughts break, native plant and animal species may take many years to recover, and some never recover or return to their former range.

Threatened plant and animal species – with an already tenuous toe-hold on existence – are often the most affected.

Days of extremely hot temperatures also exceed the thermoregulatory tolerance of some species. That means mass mortality for some animals; and large numbers of even hardy native trees may be killed by heat and lack of rain across extensive areas.

Furthermore, water sources can disappear from much of the landscape. Organisms dependent on floods are now more vulnerable, given that overallocation of water from rivers has increased drying of wetlands.

Drought is not new in Australia, but the stresses are greater now

Of course, drought has long been a recurrent characteristic of Australia. Indeed, many Australian plants and animals are among the most drought-adapted and resilient in the world. But drought impacts on wildlife are now likely to be of unprecedented severity and duration, for several reasons:

Our intention here is not to downplay the needs or plight of rural communities affected by drought.

Rather, we seek to bring attention to the other life struggling in that landscape. Australia should bolster, not diminish, conservation efforts during drought times. If we don’t, we will suffer irretrievable losses to our nature.