Opinion We've smelted a billion tonnes of recyclable aluminium. Do we need to make more?

Aluminium is hugely useful, but energy-intensive to produce. What if we didn’t have to smelt any more? 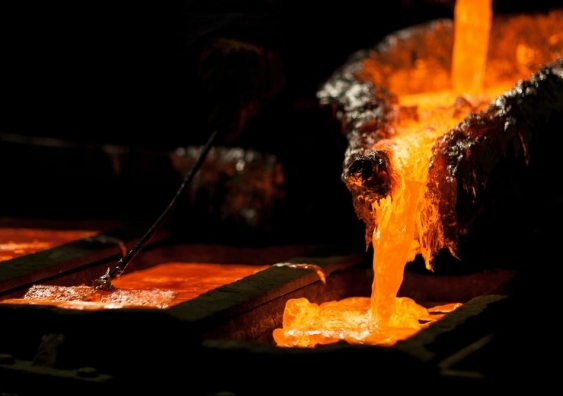 Aluminium is light and versatile, but massively energy-intensive to produce, requiring 10 per cent of Australia’s entire electricity output. Recycling it uses just a fraction of the energy. Why aren’t we closing the loop?

This metal – the most abundant in the Earth’s crust – is used in everything from kitchen utensils to soft drink cans, buildings and plane parts.

Since we discovered how to extract it in the 19th century, around one billion tonnes of aluminium has been smelted. Of that, three quarters is accessible for recycling.

Unfortunately, aluminium’s energy-intensive production has major consequences for climate change. We must power aluminium production with renewables, and find better ways to recycle this most useful metal.

To provoke thought about aluminium and its energy needs, I collaborated with designer Kyoko Hashimoto to produce new works of design using aluminium. These mirrors and vases are currently on display as part of the National Gallery of Victoria’s Sampling the Future exhibition.

As critical designers, we hope to communicate the waste problem created by mixing aluminium into unrecoverable composites, and reframe the perception of the metal’s value, which has diminished since its discovery. 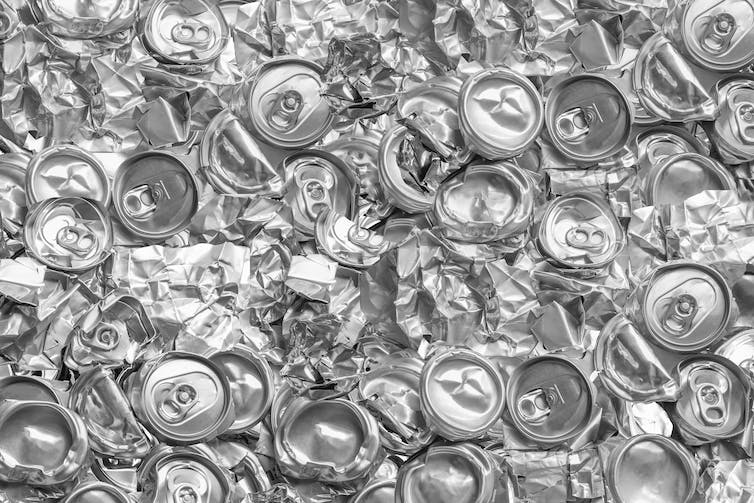 From precious metal to common disposable

When aluminium was first extracted and purified, it was more expensive than gold. Napoleon III famously had his son’s baby rattle made from aluminium. In 1884, as the most exotic metal of its day, it was used for the pyramid cap on the Washington monument.

Now, aluminium is plentiful and cheap. Australia is the world’s leading producer of the main ore, bauxite, and we export most of it for processing overseas.

Impressively large amounts of energy are needed to break the tight bonds of the metal from its oxides. In Australia, making new aluminium represents 6.5 per cent of our greenhouse gas emissions. The intense chemical process also creates toxic byproducts and pollution.

Over the past few years, aluminium production has shifted to countries such as Iceland, with cheap and sustainable energy from geothermal sources.

Unfortunately, the lion’s share of production takes place in countries such as China, and often relies on Australian coal. Australia also ranks high in CO₂ emissions from alumina refining, an intermediate stage of processing.

Recycling aluminium requires only around 5 per cent of the energy of smelting, the highest recycling energy saving for any major material.

Why don’t we recycle all our aluminium?

There is scope to boost recycling, but product design and waste streams pose challenges.

For example, the aluminium we used in our designs is newly milled “5083”, a high grade, corrosion-resistant magnesium alloy with traces of manganese and chromium. Such trace metals are used to improve rigidity, corrosion resistance or welding capacity.

While our supplier sends offcuts and scrap for recycling, the mix of different alloys means these are ‘downcycled’ into lower-grade products. Most of Australia’s aluminium scrap is exported, so increasing our local recycling would decrease the emissions from shipping this scrap offshore.

Read more: Guy Keulemans: Getting his fix on sustainable design

The job gets harder when you encounter multi-material objects. Metal fasteners like screws, rivets and pins, as well as bonded adhesives, are leading causes of impurities in aluminium recycling.

Many aluminium products are designed also as “monstrous hybrid” composites using materials unable to be easily separated. Coffee pods are the most famous example.

These problems have to be fixed at the design stage. Such issues mean aluminium is steadily lost to human use, ending up in landfill and back into the environment.

While aluminium ores are readily found across the world, the metal is curiously absent from biological systems. It has had little role in plant or animal evolution and biologically available aluminium can be toxic. We do not know if this will have long-term consequences in nature.

We drew attention to these hidden issues in the design of our “metalloplastiglomerate” vases. They were made by crumpling and hammering aluminium sheet around organic fibre, plastic and soft metal waste.

In these works, we speculate about what will happen to aluminium as it is ejected from collapsing cities and transforms back into geological rock in the far future. 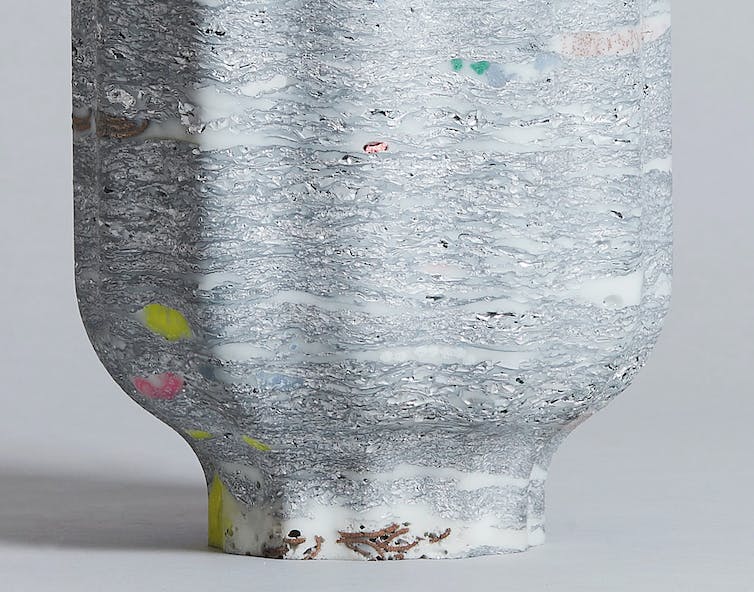 Could we pioneer a circular economy with aluminium?

Even as the world fights to stave off dangerous climate change, demand for new aluminium is estimated to double or triple by 2050. If Australia’s aluminium recycling improves, we’re likely to keep making new aluminium to supply increasing international demand.

Australia exports most of its new aluminium, despite our smelters relying on heavy government subsidies. These smelters have been used by politicians to justify power from fossil fuels for their baseload output.

This is a furphy. Hydroelectric power works well with smelters too. Aluminium production using renewable energy may be justified in Australia, if we can manage its other environmental impacts.

It’s entirely possible to end the need for new aluminium. Since we discovered the metal, we have produced around 1 billion tonnes of it. Around 75 per cent is in current use, and available for recycling as it becomes necessary. Planning to stop producing new aluminium would create an incentive to better care for the metal we have and reduce waste.

And while aluminium is prized as a light and strong material, there are other materials with potential to replace it, including those that capture carbon instead of release it.

Slowing and eventually stopping new aluminium production would demonstrate how the world’s economy can thrive under degrowth – a controlled contraction of production to stem climate change and function within the planet’s ecological limits.

We considered this idea in the design of our aluminium and bauxite mirrors. They contain roughly the amount of aluminium able to be produced from the bauxite rocks that hold them. To communicate a sense of conservation, we modified the rock as little as possible. We made one cut to expose its beautiful pebble-like internal structure, and a second to hold the mirror. 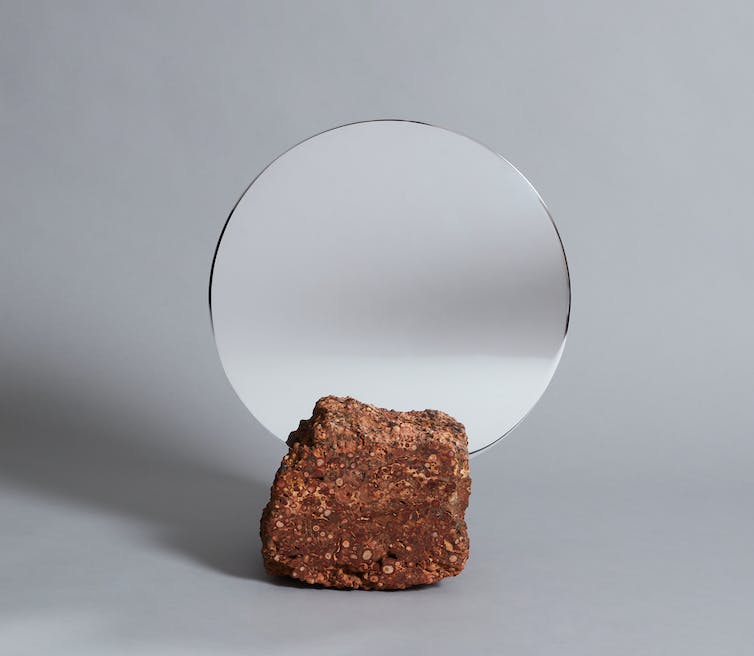 In our designs, we hope to show the technological beauty of aluminium production, as well as the care with which we should approach it.

Aluminium’s unique properties drive ever greater production. But a growth at all costs mentality for resource extraction is perilous – especially when we can use what we already have.