Into the wild: meet the alumnus capturing Australia's wildlife

The skill of being in the right place at the right time has landed this UNSW alumnus a thriving career as a wildlife camera operator, with credits including the BBC and National Geographic. 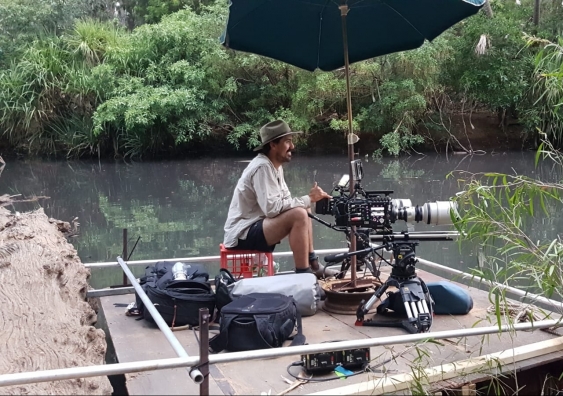 Daniel Hunter on assignment for National Geographic’s Hostile Planet in the Northern Territory.

Waiting patiently on a tilting barge in a croc-infested river with a rudimentary ‘safety rig’ between you and the jaws of a deadly predator may cause a man to question his life choices.

The location was the Roper River, about four hours from Katherine in the Northern Territory. The assignment for National Geographic’s Hostile Planet was filming bats flying low to the river and swooping in for a quick drink while trying to avoid any crocodiles that might be lurking. Most bats make it. Sometimes a croc launches itself up out of the water and snaps up a bat – and it’s all over.

“Filming the bats and the crocodiles was really tricky because it’s a split-second event. Ideally, the camera is as low as possible to the water to film the action of the bats trying to evade the crocodiles, you've got to be on the water yourself,” he said.

“We made a pontoon out of old aviation fuel drums and some plywood, which sounds okay but is kind of scary when you're sitting in the water with crocodiles around you.

“We had a makeshift rail guard built as well but over the month of the shoot the pontoon was on an angle and it definitely didn't feel safe. Then there were the challenges of transporting and using a scissor lift in a remote area so we could get right up to the bat colony, because they were roosting you know 15 to 20 metres up.”

The resulting footage for National Geographic’s Hostile Planet is stunning natural history storytelling and has helped cement Hunter’s reputation both here and overseas. In addition to the bat-crocs shoot, Hunter and his business partner Ed Saltau also captured another sequence for Hostile Planet on the red kangaroo at UNSW’s Fowler’s Gap research station. The series has been nominated for three Emmy awards. 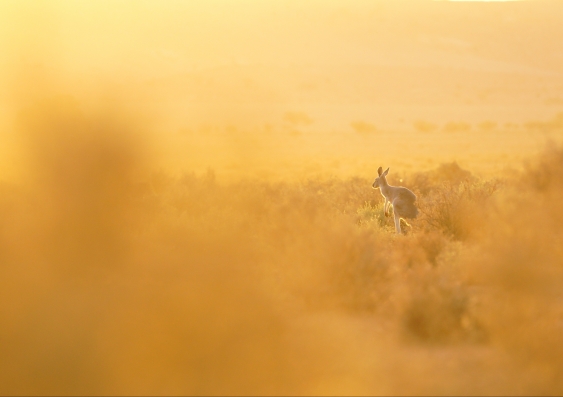 Hunter graduated with a Bachelor of Science from University of Melbourne, followed by a PhD supervised by UNSW Professor Mike Letnic. It was during that PhD that he first experienced documenting top predators in their home habitat, researching dingoes in the forests of the Blue Mountains.

Australia has a terrible mammal extinction record, particularly for small mammals, and one of the prime reasons is the damaging impact of introduced foxes and feral cats. Hunter’s research revealed that maintaining a top predator like the dingo in forested landscapes helps improve the chance of survival for small mammals.

“Dingoes have a really significant and positive effect on small and medium mammals like bandicoots, antechinus and bush rats,” he said.

“The mere presence of a dingo, a larger predator, means that cats and foxes are less brazen,  they're always looking over their shoulder. The foxes and cats are less likely to spend more time hunting and being out in the open. Instead, they are more wary of being predated themselves, which benefits the small and medium mammals.

“The in-field experience from my PhD – everything from four-wheel driving in rough terrain to designing surveys and setting remote cameras and locating wild animals – has proved so valuable for filmmaking now. It’s helped me learn so much about the bush and I've become much more confident and I'm definitely a better filmmaker because of it.” 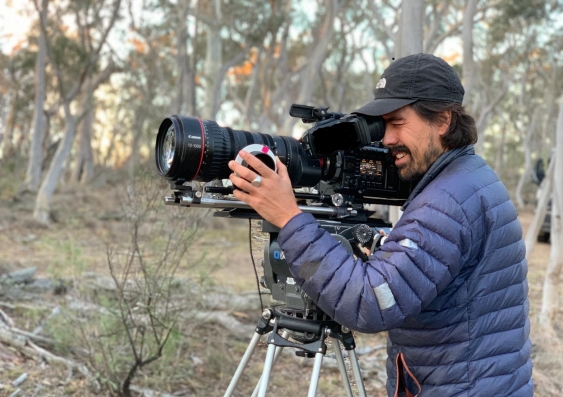 David Attenborough is a legend of natural history and an inspiration for generations of conservationists, documentary filmmakers and researchers worldwide. His next landmark feature is One Planet: Seven Worlds, due for release in late 2019 and telling the story of the Earth’s seven continents.

Australia, the island continent, will have its own dedicated episode, with time and scope for telling the story of our landscapes and wildlife like never before. Hunter and Saltau filmed most of the sequences for the Australia episode.

“It was a childhood dream come true to work on a documentary for the renowned BBC Natural History Unit and for a project narrated by Sir David Attenborough,” Hunter said.

“One Planet is going to be the biggest and best wildlife production since Planet Earth II. Ed  and I have seen some little bits and pieces and there’s going to be some beautiful content, some of it never filmed before.”

Hunter’s advice for students is to bring your full passion to everything you do.

“You don't have to be brilliant at everything you do as soon as you start. But if you're passionate about what you love that is infectious. People will want to support you and help you learn and grow.

“Science degrees are great because they are quite varied – you can really hone a broad range of skills and by the time you're in third year, you can focus on the things you’re best at and enjoy the most.” 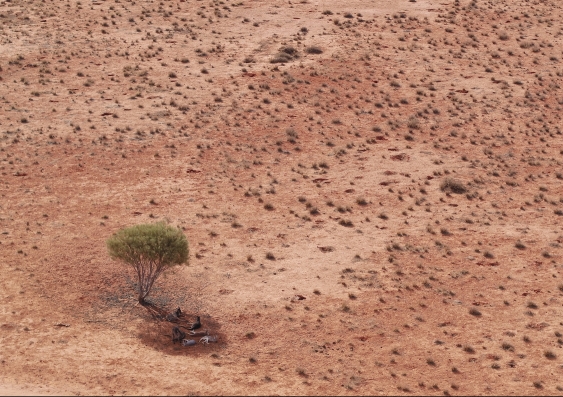 A drone shot of kangaroos at Fowler's Gap, where Daniel captured another sequence for Hostile Planet. Credit: National Geographic

From honours degree to a deep dive into the abalone industry