Google software engineer and UNSW alumna, Tamina Pitt, is breaking down barriers and forging a ground-breaking trail for others to follow. 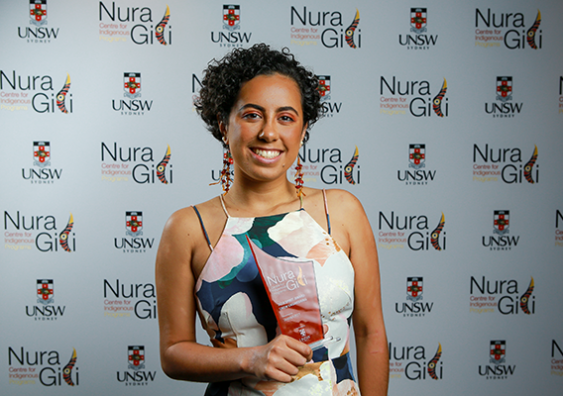 Tamina Pitt definitely wants to be in a role promoting engineering to women and Indigenous people.

As an Indigenous woman working in tech, Tamina Pitt has found herself something of an equity, diversity and inclusion pioneer, just by dint of being who she is. Although her journey to this point hasn’t always been easy, she is determined to capitalise on her successes to further strengthen the case for diversity in STEM careers and industries (Science, Technology, Engineering and Mathematics).

Tamina completed her UNSW Computer Engineering degree in 2019 and was offered a role at Google in Sydney immediately afterwards. She is currently a Software Engineer embedded in the Google Maps team working on the Directions Platform, the infrastructure that serves directions to users, and maintaining the current application.

“What inspires me most about engineering is that engineers create the things that people interact with every day, things like Google Maps that can greatly improve peoples’ lives. I want to add my perspectives to the mix so we can create better products that appeal to, and help, a wider diversity of people,” she says.

Tamina says it was her ‘absolute love of maths’ that hooked her into engineering in the first place, but she initially started down an Electrical Engineering pathway. She only switched to Computer Engineering in her second year after a ‘fantastic compulsory computing course’ convinced her to change directions. Although, once there, as one of the few women on the course and always the only Indigenous student, there were times that she felt a bit isolated.

“It could be a real struggle sometimes, but I grew my own network of friends and other Indigenous students, my brother was also studying engineering which was great, and I received a lot of academic support, particularly through Nura Gili,” she explains.

Nura Gili is UNSW’s Centre for Indigenous Programs, which supports existing Indigenous students via services and a physical space to connect and study. The centre also provides pathways to prospective students to study at UNSW and offers Indigenous Studies courses and units.

“The Nura Gili student centre was excellent with plenty of resources. There were so many people there, taking an interest and genuinely caring that you had everything you needed to complete your studies and thrive.”

It was the staff at Nura Gili that recognised Tamina’s tenacity, her will to succeed and her contribution to the Indigenous community on campus. They nominated her for a Spirit Award at the UNSW Indigenous Awards in 2019 – she not only won the award that night, but also walked away with the Engineers Australia Outstanding Student Award, too.

Although still at the start of her career, Tamina’s CV is impressive. She interned at Google during her degree and volunteered as an organiser for Indigitek, a community of Indigenous people who are passionate about technology, between 2016-2018. But one of the most striking aspects about her is that she has been quick to embrace any opportunity to speak passionately for equity, diversity and inclusion. A prime example was when she won the 2018 NAIDOC Youth of the Year award, where she called on her Indigenous female peers to seriously consider careers in tech.

When her name was announced as the winner, Tamina says her initial reaction was shock, but she soon came to realise that what she had achieved was indeed quite unique. “I was really nervous because I had to go onstage and make a speech, but then I thought about how engineering is an industry where Indigenous people are hugely under-represented and I thought, ‘Wow, that kind of makes me a trailblazer,’” she explains.

“After it sank in, it made me really proud of my work and affirmed that engineering was right for me, even though there were times during my studies I found it all very difficult.”

Tamina hails from the Wuthathi people of North Queensland and the Meriam Mir people from the Torres Strait Islands, but grew up in Sydney. When it came to choosing the topic for her Honours thesis, she wanted to take the opportunity to combine her background and culture with her official studies.

“I wanted to explore how Indigenous perspectives can affect the design of technology. I think that many Australians, if they don’t personally know Indigenous people, tend to think of ours as a culture that stays in the past and is not moving into the future. But that just isn’t true.”

Tamina says she found that Indigenous people are avid users of social media to hook into their culture and connect with each other. “What really interested me was how Indigenous cultures translated into the online context and what role technology could play in making the online space better and safer. This is why it is vital to have a range of diverse voices in technology design teams,” she continues.

“From what I can see, the world and its power structures are changing. Nobody can ignore the fact that women, Indigenous people and other marginalised people are taking power back. If industries don’t adapt to this, they’ll be left behind.

As for the future, Tamina says she is still so early in her career that she isn’t sure what she wants to do, but one thing is certain: “I definitely want to have a role promoting engineering to women and Indigenous people and building things that improve society for everyone.”