Opinion Women scientists are here: we need to be seen and heard

When people think of science celebrities, they think of men. Emma Johnston argues that more needs to be done to highlight the role of women in science. 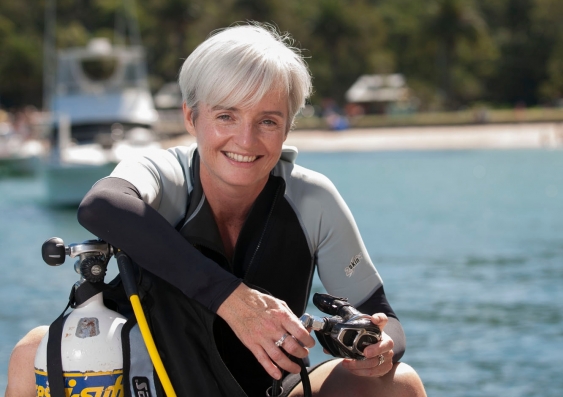 OPINION: Malcolm Turnbull, our innovation Prime Minister, says there's never been a more exciting time to be an Australian but I'm only half convinced. The bright light shining on this new innovation age is not illuminating many women.

Yet, unless you're looking pretty hard, we are apparently just not that easy to find.

The media severely under-represents women in science, technology, engineering and maths. Just look at the big science celebrities internationally. Who do you think of when you think of science in the media? David Attenborough, Brian Cox, Neil de Grasse Tyson, Brian Greene, or Carl Sagan. And in Australia, our stars are the wonderful Robyn Williams, Karl Kruszelnicki and Adam Spencer.

This bias is insidious. It reflects how many women scientists we see on our TVs and in our news articles and how we see them.

When British scientist Dorothy Crowfoot Hodgkin won the Nobel Prize for Chemistry in 1964, the headlines screamed "Nobel Prize for British wife" and "Grandmother wins Nobel Prize". Unfortunately, not much has changed. A 2014 study found that when women scientists do appear in the media, there is an unreasonable focus on their appearance, their relationship status, and their status as a parent.

When researchers interrogated more than 2.3 million articles from more than 950 news outlets they found that even respected organisations like the BBC referred to men 81 per cent of the time.

In its more than 50 years, only 12 of the 100 or so science speakers at the National Press Club of Australia have been women. My appearance on Wednesday as part of a panel on women in science with mathematician Nalini Joshi and physicist Tanya Monro will increase the representation of women scientists who have appeared at the press club by a quarter.

Although many have their own set of biases and stereotypes, the problem is often not intended, but the fact the media tends to run to tight deadlines. They want to speak with the most senior experts in a field and they want to do so immediately.

Even reporters who are consciously trying to address under-representation may struggle if they only talk to the top. Because science has struggled, like most other fields, to increase the number of women in senior roles.  Women currently comprise only 16 per cent of the most senior STEM positions (excluding health) in universities.

This is the crux of our problem: it's self-reinforcing. It is well established that a lack of visible role models reduces a person's confidence in their ability to undertake a role. This lack of confidence, in turn, can create stress that reduces performance and, separately, it can result in gender-biased assessments of "merit". It also reduces the attractiveness of the career as a choice. So the fewer women leads to fewer women leads to fewer women…

We need something to change. Australia really needs more women to enter, stay, and succeed in STEM areas.

By turning off girls, by teaching both men and women that while women can study science, they can't be science leaders, we are hindering our ability to become the smart and agile society we need to be if we are to be truly competitive in a rapidly evolving world.

We absolutely need to change the structural barriers to gender equality in science. And there's promising beginnings. Programs like Science in Australia Gender Equity or SAGE, are aiming to fundamentally redress the gender imbalance at the senior levels of science.

But we must also change the strong negative stereotypes and unconscious biases as well. We must give our girls and women more successful science role models – something grand to aspire to.

When we see, hear and read people talking about science we need to ensure they accurately reflect the true, full diversity of STEM professionals.

Of all the serious issues facing women in science today, the lack of visible role models may be the easiest to fix.

We just need to be given a chance to say we're here, we do fascinating research, we have wonderful jobs, and we know what we're talking about.

Come find us and we'll break the cycle together.

Professor Emma Johnston is an award-winning marine scientist at UNSW, Director of the Sydney Harbour Research Program at the Sydney Institute of Marine Science and TV presenter for Coast Australia.

Professor Johnston, Professor Nalini Joshi and Professor Tanya Monro are speaking on 'The Future of Science: Women' at the National Press Club in Canberra today.