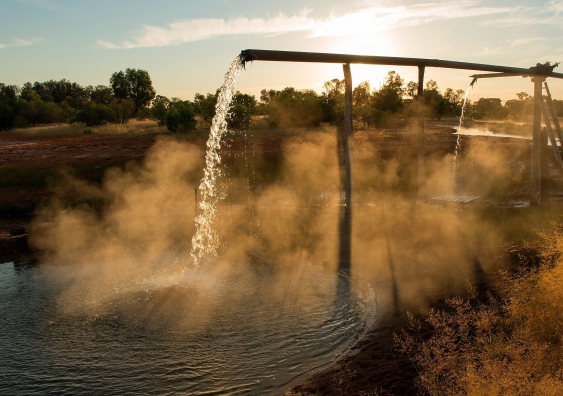 OPINION: You might not give it more than a passing thought, but groundwater is a vital freshwater resource. In Australia alone, the reserves of groundwater help to earn the nation a steady A$34 billion a year from mining, food production and manufacturing.

But it’s also a vulnerable resource. Worldwide, about 1.7 billion people live in regions where groundwater is under stress, 60% of them in India and China.

US and Canadian researchers recently calculated the total amount of the world’s groundwater and estimated that it is equivalent to a lake 180m deep covering the entire Earth. This makes groundwater the largest active freshwater resource on the planet.

Groundwater is often referred to as a hidden resource, as it is not often seen and is hard to visualise. Water is stored between pores in the rock, or in fractures, known as aquifers. The amount of groundwater at a particular place therefore depends on the local geology. Geological history determines the extent to which a rock is porous and fractured, and therefore whether it can store groundwater.

We still know very little about this precious resource, particularly about how it may be affected by increasing pressure and a warming world. But scientists are starting to figure out the answers.

How do you find out the age of water?

The same research team that calculated the amount of groundwater also investigated its age. How did they do this?

Humans introduced a convenient time signature on the Earth when we started testing atomic weapons. This leaves a time stamp which can be found in water, rocks and living organisms.

By seeing if there was radioactivity from atomic bomb testing present in the groundwater, the researchers could estimate that 6% of this groundwater is younger than 50 years old.

It could be argued that if we use only this “modern” groundwater, then this is sustainable, as we know that it has been replaced (or recharged) by natural processes over the last 50 years. But how quickly groundwater recharges changes over time.

Recharging water: you can’t just plug it in

Other recent research has measured how the amount of water stored on land has changed. The researchers did this by measuring changes in Earth’s gravity field, using GRACE satellite data from NASA collected between 2002 and 2014.

The increase in stored water on land is enough to affect global sea levels. So although global sea levels are rising due to global warming, over the last few years a decrease in the rate of sea level rise is explained by more water being stored on land as groundwater.

Gravity data can show us where groundwater storage has increased over time: for example, due to large flooding events in the upper Missouri in the US, and Zambezi and Niger basins in Africa. The recharge of groundwater by rivers is important and it is one of the main ways that fresh groundwater is replenished – the other being direct recharge from rainfall.

The gravity data also showed where the land water store was decreasing. These corresponded well with regions of groundwater depletion such as California and the Middle East.

Most importantly, these data identify where groundwater is being affected by natural climate variability, by human over-use (or over-abstraction) and by changes in groundwater recharge due to global warming.

Our research group at the University of New South Wales has considered what the implications might be for the carbon budget when groundwater is abstracted. In our recent paper in Scientific Reports, we show that the harder you pump groundwater, the more organic carbon is brought to the surface.

Organic matter, which is normally found in films on the surface of rock fractures, is mobilised by pumping groundwater. Pumping groundwater can therefore move organic carbon from an underground store to become a surface carbon source. This could, potentially, be released into the atmosphere and contribute to global warming.

We don’t know, but with groundwater over-used in regions affecting approximately 1.7 billion people, we think it’s worth seriously investigating.

Our work is the first of its kind and it has considered only one experimental research site in a fractured rock aquifer. Over the next three years, we will extend this research using a series of bore fields funded by the Australian National Collaborative Research Infrastructure Strategy (NCRIS) to better understand the groundwater organic carbon store.

Andy Baker is a Professor at the Connected Waters Initiative Research Centre, UNSW.