A team of Australian roboticists, who smashed their way to victory at the RoboCup world soccer championship in China for a seond year running, return home on Monday and will be holding a media conference at UNSW. 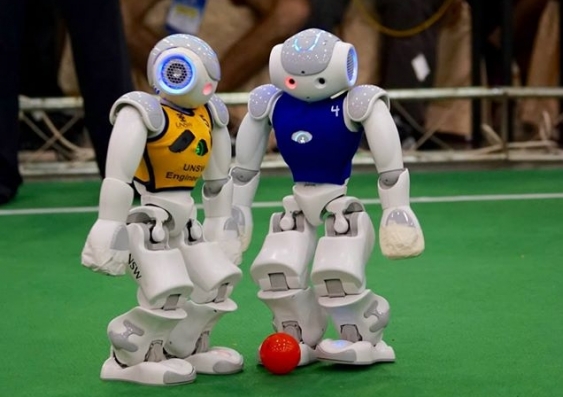 The triumphant team of Australian roboticists who smashed their way to victory at the RoboCup world soccer championship in China – snatching the trophy for the second year in a row – return home on Monday and will be holding a media conference at UNSW.

The four-member UNSW team (and their four humanoid robots), who beat an elite German squad by 3-1 in a tense grand final, will be available to take questions at the media conference.

They will afterwards provide demonstrations of the robots in action in a special soccer pitch where the robots train. Also available will be video and high-resolution images of the robots and team members, as well as the team’s victorious finals match in Hefei, west of Shanghai in China, on July 22. (Most of the team have been travelling on holidays since then).

RoboCup is an international competition of 300 teams from 47 counties that fosters innovation in robotics and artificial intelligence. The premier category is the Standard Platform League, in which squads compete on an indoor soccer court with robots operating entirely autonomously – ie. with no control by humans or computers during the game. This year’s tournament was fought between Naos, 58-cm tall humanoid robots that whose artificial intelligence and tactics were developed by young software designers and engineers.

RoboCup was founded in 1997 with the goal of developing a robot team good enough to beat the human champions of the FIFA World Cup by 2050.

You can download a map to the venue for the media conference here.