Scientists from around the world are meeting in Sydney to discuss the latest advancements in silicon quantum computing. 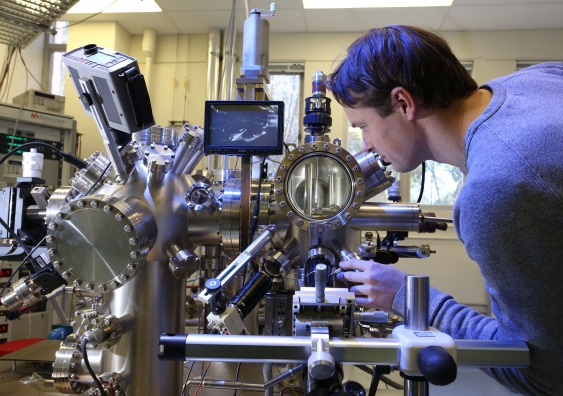 Scientists from around the world are landing in Sydney this week to join discussions on the latest research in silicon quantum computing with renowned physicist and Australian of the Year, Professor Michelle Simmons, and UNSW Sydney researchers from the Centre of Excellence for Quantum Computation and Communication Technology (CQC2T), including Professor Andrew Dzurak, Professor Sven Rogge and Professor Andrea Morello.

Bringing together more than 200 leading researchers in the field, the Silicon Quantum Electronics Workshop is a global initiative to share research insights and technology advancements in the race to build the world’s first quantum computer – in silicon.

This is the third time Sydney has been the host city of this international get-together, which is now in its twelfth year.

“It is exciting to see NSW host an international forum that supports collaboration and research advancement in this groundbreaking field of science,” says Professor Hugh Durrant-Whyte.

“It is a great opportunity to shine the light on world-leading Australian research and innovation in this space.”

Five major approaches to quantum computing are being explored worldwide. The international researchers attending the workshop – from countries including Japan, USA and Netherlands – together with the Australian researchers, are focused on silicon emerging as the winner.

“Silicon is among the most stable and manufacturable environments in which to host qubits, and it has a long history of use in the conventional computer industry,” says Professor Simmons, Founder of SQC.

“This provides an advantage in the development of full-scale quantum computers in silicon.”

CQC2T is a world leader in the development of quantum computing in silicon with research to date demonstrating the highest fidelity, longest coherence time qubits and the longest-lived quantum memory in the solid-state.

The team will be presenting its latest results on fast single spin readout, two-qubit gates and chip integration, advancing towards their goal of building a silicon-based quantum computer in Australia.

Professor Simmons, along with others attending and speaking at the event, is working with SQC to build the first useful, commercial quantum computer. Co-located with CQC2T on the campus of UNSW Sydney, SQC has raised $83 million and is investing to deliver a prototype 10-qubit device in silicon by 2022.

“Sydney is one of the leading destinations for quantum computing research in silicon,” says Professor Simmons.

“It is not surprising that many of the world’s most talented quantum physicists and engineers will be coming here this week.”