Australian quantum researchers have been able to identify the exact location of a single atom in a silicon crystal – an important development for building a silicon-based quantum computer. 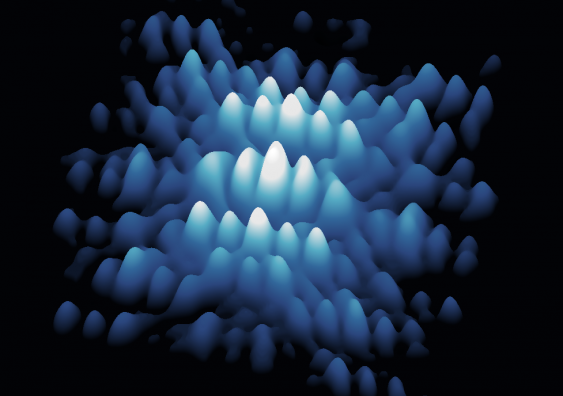 Researchers from the Centre for Quantum Computation and Communication Technology (CQC2T) have been able to identify the exact location of a single atom in a silicon crystal – an important technique for building a silicon-based quantum computer.

The study, by Centre researchers from UNSW and the University of Melbourne, is published today in the journal Nature Nanotechnology.

Individual phosphorus atoms placed in a silicon crystal have great potential as quantum bits, or qubits – the core components of large-scale quantum processors. Being able to pinpoint the position of a qubit is critical for the design of accurate quantum logic operations, where calculations will be carried out between qubits of information.

The world-first approach for locating the introduced, or donor, atoms in the silicon crystal lattice involved a combination of theory and experimental images.

“Close collaboration with theory successfully pinpointed donor atoms in the silicon lattice at positions that are relevant for quantum computation.”

Study lead author, University of Melbourne’s Dr Muhammad Usman, says: “The images showed a dazzling array of symmetries that seemed to defy explanation, but when the environment of the quantum state was explicitly taken into account in the theoretical treatment, suddenly the images made perfect sense.”

Professor Hollenberg says: “The STM images have remarkable detail, showing the tendrils of the donor’s electron wave function protruding from the silicon surface interacting directly with the scanning STM tip.

“The final images are therefore highly sensitive to the absolute location of the donor atom.”

Professor Rogge, who heads the low temperature STM imaging laboratory at UNSW, believes that the ability to exactly pinpoint the quantum bit is critical in understanding not only how these objects will be used to perform quantum logic gates in a quantum computer, but also how such donor atoms could affect other ultra-scaled nanoelectronic devices.

The Australian Research Council CQC2T, which is headquartered at UNSW, is a world-leading research organisation focussed on the demonstration of the fundamental building blocks of a silicon-based solid-state quantum processor and an optical processor.

In December 2015, the federal government announced a $26 million investment in the Centre’s ground-breaking quantum computing research as part of its National Innovation and Science Agenda. This was also supported by a combined $20 million commitment from the Commonwealth Bank of Australia and Telstra.

Australia could become a leader in cybersecurity research