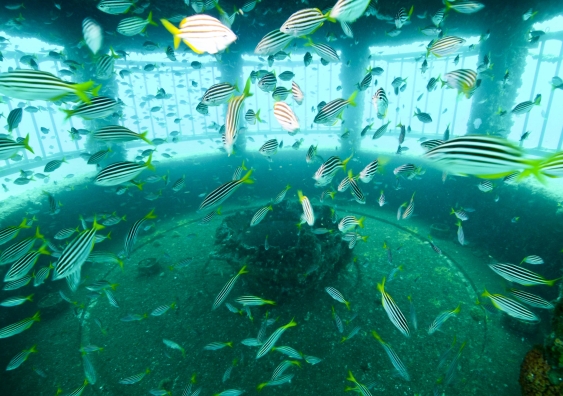 The research focused on six ocean sites near the desalination plant.

The results of a world-first major study into the marine ecological impacts of a large-scale water desalination plant have been publicly released.

The six-year study on the Sydney Desalination Plant looked at the effects on marine invertebrate recruitment of pumping and ‘diffusing’ of high concentration salt water back into the ocean.

The UNSW Sydney-led research is being published at a time of increasing reliance on desalination plants for drinking water across most states in Australia, as drought conditions in the east and south worsen and domestic water supplies decline for both metropolitan and regional areas.

UNSW Dean of Science and senior author of the study, Professor Emma Johnston, said the results are timely as they coincide with renewed focus on desalination, with the plants in Sydney and Melbourne preparing to start operations due to rapidly decreasing water supplies. 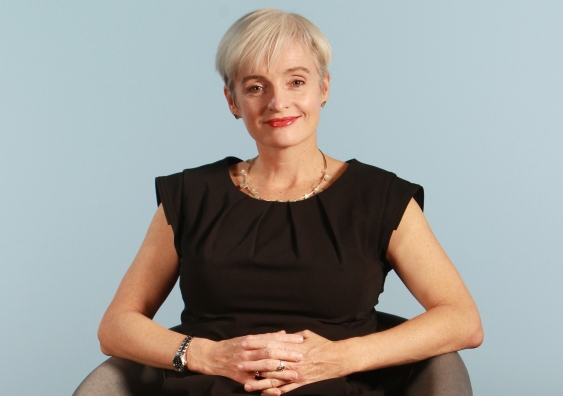 “Increasingly, frequent and severe climate and population driven water shortages are projected to accelerate the growth in desalination in the coming years,” Professor Johnston said. “The good news is that our comprehensive study shows the hyper-saline outflow from this modern plant is not having a major impact on the NSW coast.

“We do need reliable and high-quality drinking water and we need to understand the potential for ecological damage from the act of extracting it from the ocean. There is a real possibility that the Sydney desalination plant could be expanded to meet demand if storage gets critical, with the original design having the potential for a doubling of its size in the future should the need arise.”

The logistically challenging study took place at six underwater locations, at a depth of about 25 metres, over a six-year period during which the plant was under construction, then operating and then idle. This enabled the team to rigorously monitor for impacts and recovery among marine life from the effects of pumping large volumes of hyper-saline water into the ocean.

Professor Johnston stressed the study results do not mean the urgent need for more sustainable water use can be ignored: “Water saving and water re-use practices should be the first strategies considered by any state. Our study simply shows that the potential marine ecology impacts from a well-designed, and well-located desalination plant should not immediately prevent us from considering desalination for the supply of fresh drinking water in a period of severe, prolonged drought.” 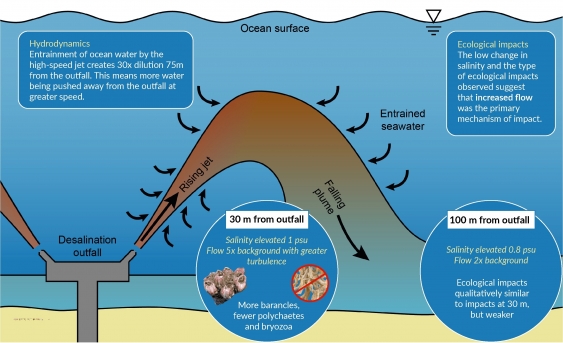 Water flows and effects near the desalination plant outfall sites.

The original owner of the plant, Sydney Water, commissioned the independent, world-class ecological impact assessment. UNSW Sydney led a team including scientists from NSW Fisheries Research and Southern Cross University, and the results have just been published in the leading international peer-reviewed journal Water Research.

Study lead Dr Graeme Clark said the results were surprising as they debunked the prevailing understanding that high salt levels in the outfall brine would be toxic to marine life. The findings instead showed that the main effect occurred over a small area within 100 metres of where the outlets were located and were likely the result of changes to water flow.

“The high-pressure diffusers that return the high-concentrate salt water to the ocean at a high velocity are so effective at diluting the brine that concentrations were almost at background levels within 100 metres of the outfall,” he said. “This is the result of good engineering and good modelling behind the diffuser design. And within this small 100-metre impact zone, some invertebrates increased in numbers, the ones that benefit from high-flow conditions such as barnacles, and some were reduced in quantity or did not recover after shutdown of the outflow, and these were the species with slow swimming larvae, such as tubeworms, lace corals and sponges.”

Desalination plants operate in Melbourne, Adelaide, Perth, Gold Coast and at many remote and regional locations. Globally, about 1 per cent of the world's population now depends on desalinated water for daily use, supplied by almost 20,000 desalination plants that produce over 90 million cubic meters of water a day.

There is a rapid expansion of the use of desalination, with global capacity increasing by 57% between 2008 and 2013. By 2025, more than 2.8 billion people across 48 countries are likely to experience water scarcity, and desalination is expected to become an increasingly critical water source for many coastal populations.

Audio, video and images: Broadcast quality audio and video grabs by Professor Johnston, as well as a graphic of the underwater impact zone, and underwater photos are available to download from this link https://we.tl/t-vG2zbLRA6u. They are also available from the contact below.