Waste tyres diverted from landfill by UNSW ‘green steel’ technology could reach as high as the International Space Station. 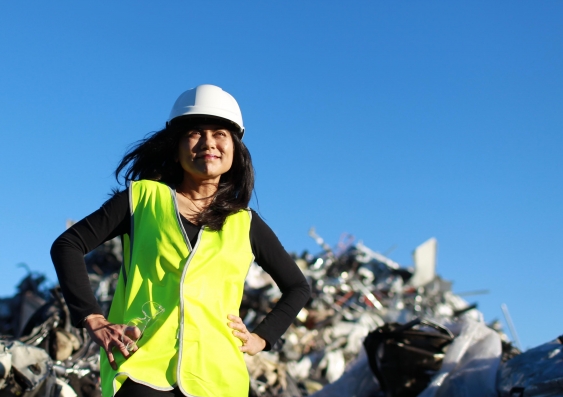 ‘Green steel’ technology invented at UNSW has achieved a major milestone, with its use in Australia preventing more than two million waste rubber tyres from ending up in landfill.

The discarded tyres – which would reach as high as the International Space Station if stacked one on top of each other – were used by OneSteel, an Arrium company, to manufacture steel in its Sydney and Melbourne facilities.

UNSW Scientia Professor Veena Sahajwalla collaborated closely with OneSteel as an industry partner to develop Polymer Injection Technology, in which old tyres and plastics provide a source of carbon to replace a significant proportion of the non-renewable coke used to make steel in electric arc furnaces.

The technology will be showcased by Professor Sahajwalla in tonight’s edition of Catalyst on ABC TV.

“We are thrilled to have surpassed the two million tyre milestone,” says Professor Sahajwalla, who is Director of the Centre for Sustainable Materials Research and Technology (SMaRT@UNSW) in the Faculty of Science.

“Our overarching commitment is to get value out of waste and not always put it into landfill.”

The achievement is a timely example of the benefits of strong links between researchers and business, coming as the Federal Government announced its new Industry Innovation and Competitiveness Agenda to put science at the centre of industry policy.

Under an agreement with UNSW’s commercialisation company, NewSouth Innovations, OneSteel has sub-licensed the technology to companies in Thailand, South Korea and the United Kingdom and has plans to further commercialise it around the globe.

“Close collaboration between OneSteel and UNSW has turned an innovative idea into a manufacturing reality. We are proud to be able to take it to the world,” says Daniel Miles, Manager Steelmaking Solutions at OneSteel.

Mr Miles says Polymer Injection Technology is not only good for the environment, it has financial benefits for the steel manufacturer: “It reduces electricity consumption, lowers carbon injectant  costs and delivers yield and productivity improvements.”

Professor Sahajwalla is now working towards her goal of a 100 per cent recyclable car, developing high-temperature technology that can turn waste glass and plastic into valuable metallic alloys – an approach that could also be used to transform electronic waste.

Earlier this year she was awarded $2.2 million by the Federal Government to establish a “green manufacturing” research hub at UNSW, with industry partners including Arrium, Brickworks Building Products, Jaylon Industries and Tersum Energy.

In August, Professor Sahajwalla was awarded a prestigious Australian Laureate Fellowship worth $2.37 million.

Read more about Professor Sahajwalla's "Factories of the Future" in the latest issue of Uniken. 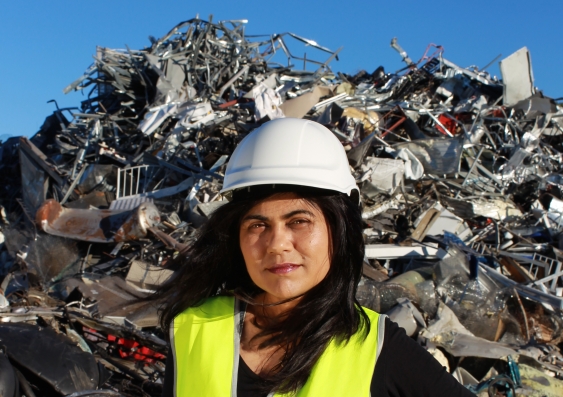 UNSW Scientia Professor Veena Sahajwalla: "It is clear on this issue that people want action, and they want governments to invest and do something now." Photo: Tamara Dean